After staying in DC for four nights with my aunt and uncle, I traveled by train to San Diego. I liked the idea of going cross country overland from the Atlantic to the Pacific before walking from Mexico to Canada, and it had the added benefit of bypassing any need to go through the headaches of airports. Plus, train trips are awesome. I spent three nights on Amtrak, as well as a night at my cousin’s apartment in Chicago.

The train journey was pretty uneventful, and gave me an opportunity to enjoy the window lounge car with my kindle. On Amtrak’s long hauls the passengers are much more likely to be eligible for Medicare than the general populace, and they also tend to be batshit crazy (albeit friendly). The guy in the seat across from mine, after sharing a personal anecdote involving his time in prison, started a conversation with another passenger about their mutual lack of friends. “My parents are my only friends,” the man confided to the other. “In fact, their ashes are in the bag in the overhead bin! I carry them with me everywhere. I talk to them a lot, too.”

One term that pops up a lot in the long distance trail lexicon is “trail angel”. Trail angels are people who go out of their way to help hikers. They often go above and beyond to make sure hikers are doing well, and in San Diego this means hosting arrivals in their home for a night and driving them to the border at dawn. Being kind of leery of the thought of going to a stranger’s house by myself, I instead booked a bed in a San Diego hostel. It was a nice establishment, and gave me time to get all my things together before heading off to the border to start my hike.

The morning of April 21st I was so excited to start the trail that I got up at 4am and couldn’t go back to sleep. On the trolley to the bus station I met Kate and Kaitlyn, two thru hikers from Auburn, CA. We animatedly talked about how happy we were to get out and start the trail, and I’m pretty sure the other passengers thought we were nuts. They’re probably right. 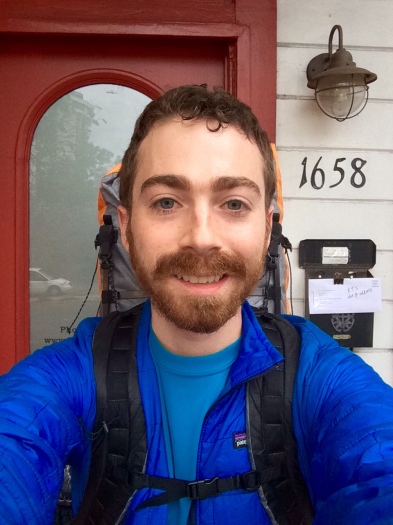 Selfie outside the San Diego hostel after very little sleep.

At the bus station we ran into Beth and Clay, a couple from Sacramento, and Fran, an Englishwoman with dreadlocks and her hair braided around lots of cool little knicknaks. The bus took us to Campo, a tiny town about a mile from the Mexican border. Considering dozens of hikers go through Campo each day this time of year, surprisingly few people in Campo knew where the PCT was or how to get to the southern terminus. It was a bit confusing, but thankfully we had our Halfmile apps on our phones.

Some guy with too much free time makes really high quality maps, mile by mile map guides, water reports, resupply information, and cell phone service reports available for free online. His trail name is Halfmile, and he recently came out with an app that uses the GPS on your phone to tell you where you are on the trail to within 16 ft (5m). It’ll also tell you how to get back on trail if you’re off it. He’s kind of the hero of the PCT community.

With Halfmile’s help, my posse hiked the 1.2 miles (2km) to the southern terminus, with lots of talk about the cannibalistic community dubbed Terminus in the TV show The Walking Dead. After our obligatory photos on the monument with the Mexican border fence in the background we set off into the desert! Next stop Canada, the great white north! 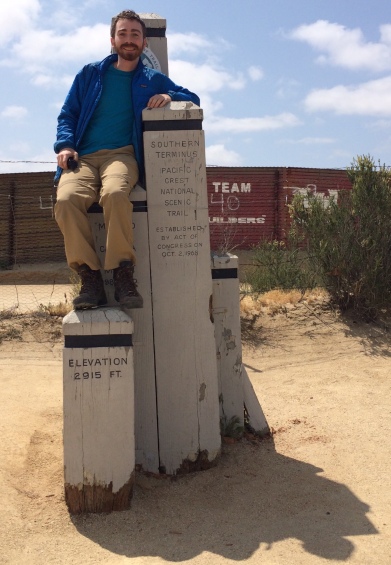 Obligatory photo at the Mexican border on April 21. Hopefully I get a similar one at the Canadian border!

The first 700 miles of the PCT are desert. Due to the recent California drought, caused by three winters in a row of some of the lowest snowfalls on record, this means water is scarce. We all loaded up on water at mile one at what my route guide called the “Juvenile Ranch Facility”. I thought it was cool that we were going to start out at a summer camp for little kids. Nope. Turns out it’s a camp for juvenile delinquents, as evidenced by the big signs out front saying “ONLY PARENTS AND GRANDPARENTS ARE ALLOWED TO VISIT. THIS IS STRICTLY ENFORCED.” But they had water, the only source for the next 19 miles (31km). Waterless sections of up to 30 miles (48km) are common here, and aren’t as big of a deal as I thought they would be. I generally take about 1 liter per five miles (8km). WATER IS HEAVY, which makes the beginning of waterless sections not fun. But my pack’s base weight, everything minus food, water and fuel, is only 12.5 pounds (5.7kg). That’s a good deal lower than the packs of most others.

I don’t know what I was expecting in the desert, but it definitely wasn’t what I’ve been hiking through the past week. The trail goes surprisingly high and is stunningly beautiful. From the border we immediately ascended to the mountains in pleasantly cool weather. Usually this time of year the desert is scorching hot, up to 90F (32C) in the shade, but we were lucky.

The desert is beautiful, especially with all the flowers in bloom.

One of the big topics of conversation on the trail so early on regards trail names. Taken from the AT, there’s a tradition of adopting or being bestowed a trail name and forsaking your “muggle” name for the duration of the hike. As was made abundantly clear by others, trail names are very different from stripper names. You can have both be different. You can have both be the same. But you have to have a trail name eventually. Dogs aren’t allowed to have trail names. Hikers get really upset about the thought of giving a dog a trail name. I’m not sure why. Most people currently don’t have trail names unless they hiked the AT before, and I’ve been told it’s best to have the trail bestow upon you a name.

However, that sometimes results in names like Shit Bag (peeing into a cup to avoid having to go into the cold outside your tent at night is easy, but defecating into a plastic bag is apparently a much trickier endeavor) and Amber Alert (you don’t just willingly disappear with a man you met in a pickup truck at a grocery store for three days without telling your friends). 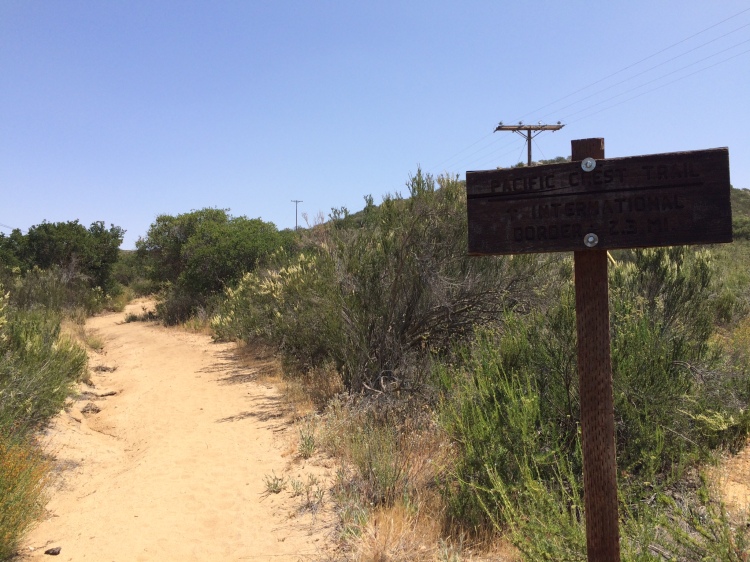 Hard to read sign that says the Mexican border is 2.3 miles away.

I solo camped my first night, after a surprisingly difficult 13.41 mile hike (thanks for the precision, Halfmile!). The campsites along the beginning were all pretty isolated, with just enough room for one tent in each site. I was woken up throughout the night by the border helicopters and their searchlights, but it was fine.