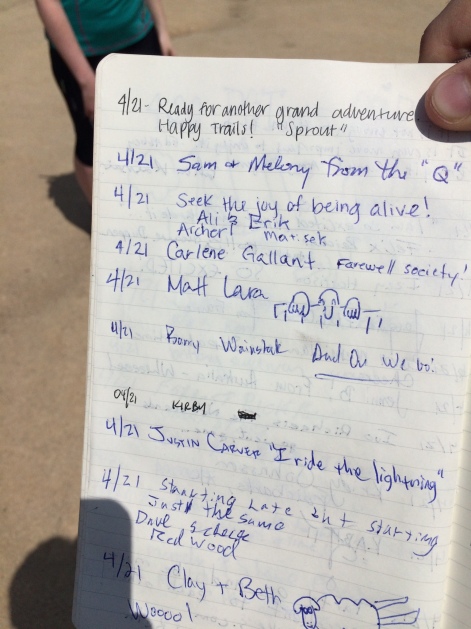 Trail register at the Mexican border. There aren’t as many of these on the PCT as on the Appalachian Trail.

I woke up incredibly excited to begin my second day on the PCT, and my first full day of hopefully many to come. I hiked over the ridge where I camped down to Lake Morena, site of the Annual Day Zero PCT Kick Off. Kick Off attracts a couple thousand people each year, including past and present thru hikers. There are also a lot of enthusiasts who go just because they like talking with and seeing all the “fanatics” as one guy put it. Others go for advice on planning future thru hikes.

I got to Kick Off and was a bit overwhelmed by all the people wandering about. It was also kind of boring. I’ve never done anything remotely resembling spending five months walking thousands of miles through the wilderness, but I am an Eagle Scout who’s accumulated many weeks of backcountry wilderness camping across the United States and New Zealand. I’m not a successful thru hiker yet, but neither am I a total newbie.

Found this hanging up in the bathroom at Lake Morena.

One thing that is new is my tent, and at Kick Off I was still trying to get the kinks worked out with setting it up and making sure it’s taut enough to keep me dry during storms. Last year on the 211 mile (340 km) John Muir Trail, which the PCT joins for a bit in the Sierra Nevada, I had a really horrible night with my friend hypothermia during a freak hailstorm. Around 2.5 inches (5 cm) of hail accumulated where I camped. It proceeded to pool around my tent, melt from my body heat, and flood my tent. My fairly old tent really was not up to dealing with that, and I had no desire to repeat such a horrid experience ever again.

Two guys at my assigned campsite were ridiculing me for struggling with my tent, and ain’t nobody got time for that. My Imodium capsules also spilled all over my pack right afterwards, and I took it as a sign from the trail gods that it was time for me to move on. Although dark was rapidly approaching, I took a couple ibuprofen (dubbed Vitamin I on the trail) and did the six miles to the Boulder Oaks Campground in less than two hours. I was reunited with Megra, a woman I met earlier, and we had an awesome time cooking dinner together in the solitude of the semi abandoned campground. We were joined by Rose, a preschool teacher who quit her job to hike the trail and who had an absolutely massive pack. It weighed 55 pounds (!!!!!) at the border. At least it wasn’t like Cheez Whiz, the 300 pound man who had a 70 pound pack, ran out of water, had search and rescue called after him, then asked on day two where he could do laundry. He got his name when he sat down and two cans of cheez whiz in his pockets exploded.

Don’t need to tell me twice.

The people on the trail really look out for each other, and help others find the way. Navigation isn’t that big of a deal out here, though it’s not like the AT where the trees are marked with white blazes every 50 yards (50 m). I overheard this between Kate and Kaitlyn:

“My dad got upset when he found out I wasn’t taking a compass or maps.”

“That the wind would guide me. He wasn’t thrilled.”

That’s also the same woman who said she adds 3/4 tablespoon of ground crickets to her dinners, because they apparently have the same protein content as a steak. I haven’t seen the pair since day two. I hope they’re doing well.

The weather forecast, which I’ve since realized is a fountain of lies, told us the next day a thunderstorm would be coming in around 1pm. Wanting to beat the storm, I got up at my usual 5:30am and was hiking by 6:30. Usually I’m quicker to get on the trail, but I was texting my father and chatting with Megra from the cozily warm confines of my now very stable tent. By 1:30pm I’d made the 15.5 miles to the Mt. Laguna Lodge, which had my first resupply package.

There are three options for resupply on the PCT. You can prepare beforehand and have someone mail you all your food for the five months, buy it along the way, or do a hybrid. Some places, like Warner Springs where I’m at now, don’t have a grocery store so you have to mail yourself the food (the town is literally just a fire station, community center, post office, school, and some houses all on one street). Since I think it’s insane to try to plan out what you want to eat for five months, I’m doing the hybrid strategy.

At Mt. Laguna I picked up the package I had mailed to myself and asked the owner to recharge my phone. I hung out on the porch for a few hours watching the nonexistent thunderstorm roll in and chatting with other hikers. I met Brittany there, and we were talking about where to camp. We’d just found out the next 11 miles had a restriction on “remote camping”, whatever that meant.

The owner came out and told us to just camp at the national forest campground a quarter mile from the store, because the next 11 miles were super exposed along a ridge. We asked him what the story was behind the sign on the road saying, “Throwing snowballs at cars is STRICTLY PROHIBITED. Violators will be prosecuted.” Apparently some guys from town started throwing ice balls at cars on Christmas and damaged a bunch of them. I love small town drama.

Me and Fran at the Mt. Laguna campground.

Brittany and I headed over to the campground and met Cat Woman. She got her trail name while on the John Muir Trail. After seeing a big shadow from inside her tent, she naturally assumed another deer had wandered into her camping area. Getting out to look at the animal, she locked eyes with a mountain lion. It circled her tent for 13 hours. She stayed inside the tent throughout the episode, banging her pot and spoon together to make noise to scare it off. Didn’t work. At 9am, some day hikers came by and were able to shoo it away. She said it was an extremely traumatizing experience, and that the rangers she reported it to said it had also happened to a different ranger previously. Bizarre behavior. She ended up finishing the entire JMT, though.

The campsite was pretty deserted, but we followed the signs to the PCT hiker campsites. A frustrated older gentleman approached and told us we had to pay per campsite. We asked if we could pay per tent or per person as is typical with hiker campsites rather than have to last minute try to organize it all, but he was unrelenting. After a while of negotiating, we finally got together the money and left it for the campground attendant.

Soon it was hiker midnight, AKA 9pm, and we retreated to our tents exhausted.