Mammoth Lakes ended up being a nice place for a zero. The John Muir Trail (JMT) hikers were everywhere and overwhelming on trail, but for some reason they were largely absent from Mammoth. Although it was pretty entertaining to see them with their massive packs (you don’t need six backup batteries for your flashlight), the younger guys consistently tried to show off to us and insist their two week hike was equivalent to the nearly two months we’d been in the desert and mountains. It was more comical than anything else, and I can definitely see now why the PCT hikers come across as so cliquish and insane to outsiders. The desert largely weeded out all the hikers who were anywhere near normal. 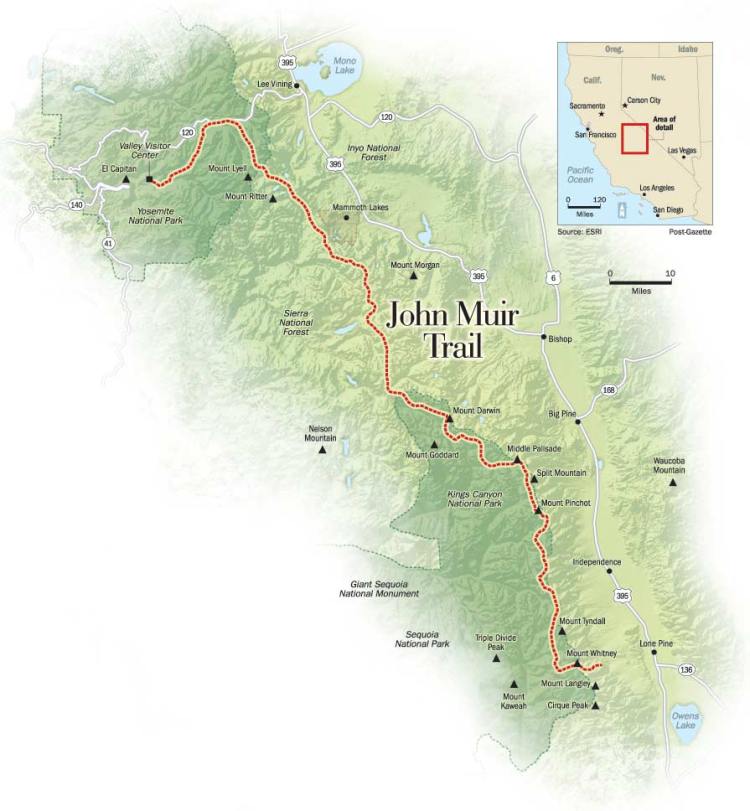 A map of the John Muir Trail. The PCT largely follows this route.

Karaoke, like me, postholed up to her waist in the snow on one of the many passes. Her leg got a nasty scratch from buried rocks during the process, and she was telling people it was from a particularly vicious marmot attack. She and her hiking buddy would relate the story in such a perfectly serious, nonchalant manner it was hard not to take it at face value. Also in the realm of marmot drama, there was a PCTer who killed one with a slingshot, roasted it on a fire in or near Sequoia National Park, and ate it. From what I heard that really weirded out and upset the hikers.

I’m not totally anti-JMT hikers, especially considering I was one last year. 90% of them are friendly and interesting, even if they’re bringing way too much. Going through the JMT section for the second time makes me realize how ill prepared I was last August, and how much better of an outdoorsman I am now. I think the nearly six weeks in the desert also likely fried my mind, which probably helped me adjust to life in the outdoors much more efficiently.

In a further display of my tolerance for non-PCT hikers, I camped with a JMTer while in Mammoth. He was an economics major at UCLA who used to live in Madrid, which was interesting to talk with him about since I’ll be moving there after the trail. When it came up that I took an eight month break in my schooling to work for five months in Yellowstone and travel New Zealand for two months, one of the best decisions I ever made, he was aghast. I got the impression his parents tried to control almost all aspects of his life, and that the thought of taking time off from school (let alone taking time off after undergrad before starting a “real” career, whatever that is) would never fly with him.

The next morning, after stopping at the post office, I waited for the first of three buses that would take me back to the trail. A woman pulled over by the bus stop, staring at me. It was a bit unnerving, but I nursed the hope that she would offer me a ride to the main shuttle and save me an hour or so.

“I know you probably have a lot of questions about the End Times, so I brought you this pamphlet that’ll tell you everything you ever wanted to know about how the end of the world will play out,” she solemnly told me while I tried not to laugh. I accepted the pamphlet and thanked her.

“You must be wearing contacts!” she added when I looked her in the eyes. I was shocked! How could she tell? I’d never met somebody who could figure it out so easily.

“Nobody’s eyes are naturally that color,” she told me with an all-knowing smile.

“Well,” I responded, “my contacts are clear. I come by my green eyes honestly.” It got real awkward real fast, and she left.

Kyle, the JMTer I camped with, was on the bus heading up to the trail. In my best deadpan voice I repeated the speech the End of Times lady gave me, and the other passengers avoided eye contact with me while trying not to laugh. I played this charade a good deal longer than would be considered socially appropriate, but he refused to accept the pamphlet.

While waiting to board the last bus the driver told me, “You must be a PCT hiker!” Somehow everyone can instantly tell I’m a thru hiker. I’m not really sure how, but assume it has something to do with my ridiculous beard, wildly curly hair, and the dirt and wear on all my gear. Then the deluge of questions started, which I don’t mind answering as long as people don’t ask snidely and obviously judge me for “wasting [my] life doing things that won’t help [my] long-term prospects.” I’ve known for quite some time that it’s part of God’s plan for me to spend some time with the stupidest and most obnoxious people on Earth, and the PCT has been no exception. Other hikers have commented on how I meet so many more judgmental people and weirdos compared to others, but that’s how I got my trail name and comes with the territory.

When we meet non-PCT hikers you have to make the decision whether or not to use your trail name. If I introduce myself as One Of Us, then I might get asked how I got that name. “Well, I was at a drug dealer’s house in the middle of nowhere in the desert and, after he gave me food I ate unquestioningly, I told my friends about how I meet the most bizarre people on the trail. And when they asked me why I meet so many strange ones, I said in a crazy voice it was because when crazy people lock eyes with me they go ‘ONE OF US’ and follow me around. My friends never let me live that down and I gave in to that being my trail name.” I’ve thought about telling non-hikers my trail name is The Zodiac Killer, but haven’t gotten around to it.

When a stranger unfamiliar with the trail is picking up some bearded, wild-looking homeless people with trekking poles off the side of the road it’s not always wise to use trail names if they don’t know much about the trail. The introductions go something like, “Hi! Thank you so much for picking us up. I’m Alive, and he’s One Of Us. I wonder where The Animal is, she’s been following us for a while on the trail… Oh, there’s Chuck Norris! Do you mind if we give him a ride, too?” Then you have to go find a different ride to wherever you’re going.

At this point in the PCT adventure it’s pretty strange not to have a trail name. I don’t want to call you James or Ashley. That’s just weird. The evening of my first night back on the trail I ran into Logan, who claims not to have a trail name. He’s famous on the trail for packing lots of candy in his pack, and has been dubbed Candy Shop by some. He had to spend the night at Muir Pass Hut, an emergency shelter, during a snowstorm with four other hikers and pulled out four ziploc bags of some kind of candy. 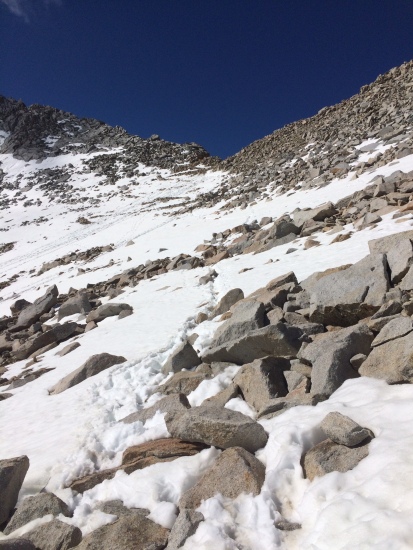 There’s still snow on the passes.

Candy is nice on the trail, but bringing too much can be a terrible idea. When I first met Coach and her wife, one of them was telling me about how she had an entire list of candy for dinner the night before. She then went into excruciating detail about the bright red-orange color of her vomit, and how they were scared it was going to attract bears. Too much info.

I heard more about the couple that got married two and a half weeks after meeting in San Diego, since the informant had been hiking with them. He said although they met in San Diego they didn’t really start talking to each other until after that. According to him, they’d really only been hanging out together for three or so days before getting married.

He’d also spent much more time than I hiking with the Ravens, a family of four thru hiking the PCT. The parents hiked the trail in 96, and are now taking their 11 year old daughter (Little Crow) and 7 year old son with them on a second thru hike. He recounted me the story of them calling The Andersons/Hippie Daycare to ask if they could weather out a storm there, and how Mrs. Anderson ran through the hikers yelling, “Put away the pot, children are coming!” Hippie Daycare was pretty chill when I was there apart from the mountain lion at 2am, though I’ve heard you never really know what you’re going to get. Sometimes it’s calm, but other times you walk in to find two guys covered in chocolate sauce wrestling on the front lawn. C’est la vie.

Hippie Daycare is known as being the most powerful vortex on the PCT. Hikers use the term “vortex” to describe any place that’s hard to leave. I’ve been seeing far fewer thru hikers on the trail than before, and I’ve heard it’s because a lot of people were sucked into the Lone Pine vortex. I can see why. I spent two and a half days there myself, and I didn’t even plan on going in the first place. It happens. Another reason I’m seeing far fewer hikers than before is because a lot of people are starting to get off the trail. I thought at the beginning people would leave for physical issues, but the vast majority of it has been mental and, to a lesser extent, financial. They miss people back home, can’t handle just hiking all day every day, etc. 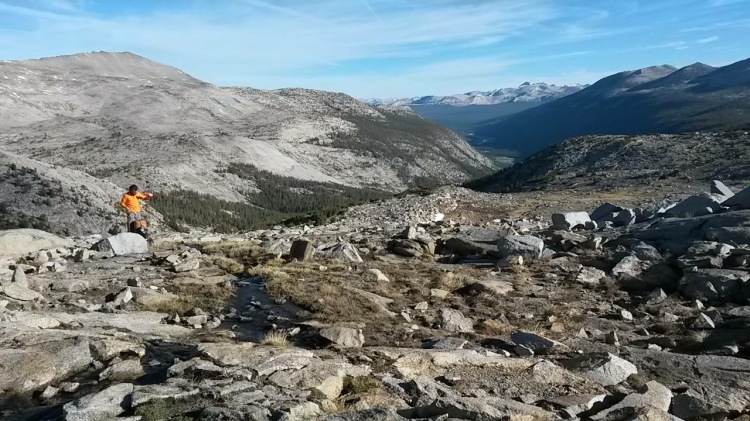 Logan and I entered Yosemite National Park together, and it was quite picturesque with the looming spires of granite surrounding us. The Tuolumne Meadows Store is the end of the JMT section on the PCT, and a lot of hikers kept following the former to its terminus in Yosemite Valley. Almost everyone who did that came back with horror stories of overwhelming masses of humanity and judgment. When you rarely see five people at any one time on the trail, going into a town or Yosemite Valley is unfathomably overwhelming. Sobo said she got a lot of looks in the Valley when she ate three entire honey buns for breakfast while waiting for the bus.

I’d planned on spending the night at Tuolumne Meadows until I saw the few dozen people in the store and heard the stories about bears running through the campground all night breaking into cars. My first thought on seeing the non-hikers was, “Did I ever look that clean at some point in my life?” It seemed unlikely. We couldn’t help but stare.

We’ve gotten to the point at which people are amazed, or plainly disbelieving, when you tell them where you started your hike. It’s kind of fun because I feel like a rock star/absolute lunatic when I say, “I started at the Mexican border April 21st. The data charts say I’m on track to get to Canada September 3rd.” Then they tell me how dangerous it is that I’m doing this solo after they ask me if I’m carrying all my food for five months with me right now. With questions like that, it’s probably dangerous for them to leave their house solo.

I continued on through Mosquito Hell through the Yosemite Swamp. Seriously, it was the worst episode of mosquitos in my life and was kind of miserable. You could see the swarms against the setting sun moving in dark clouds. Luckily, on the ascent and descent to Sonora Pass the terrain was too dry and the wind too strong for them to be of any nuisance. My mosquito head net went back into my pack!