Along with the halfway point comes a tradition from the Appalachian Trail: the half gallon challenge. Hikers eat a half gallon (1.9L) of ice cream in half an hour at the halfway point. I didn’t participate, partially because it’s not really a PCT thing and partially because it sounded disgusting, but some did. Beer Goddess was trying to get me to do it, and I asked her what she and her friends ended up doing right after it back on the AT. “We spent the afternoon vomiting on the curb.”

I asked her how she felt 3/4 of the way through her ice cream and she replied, “Like I’m going to vomit. You should do it.” Despite the ringing endorsement I passed. I did, however, have three milkshakes from the Pine Shack Frosty across the street. They had 30 flavors and I got caramel, lime, and peppermint. Soooo good. 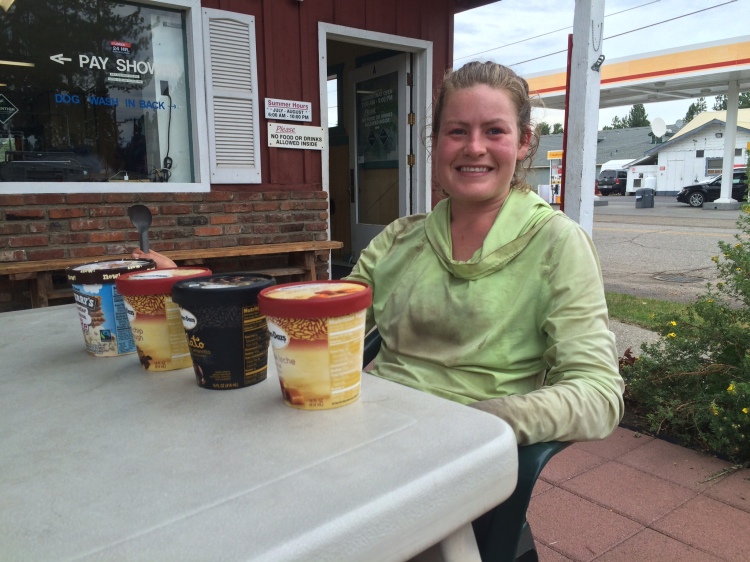 Beer Goddess and the half gallon challenge in Chester.

Courage, Mechanic (a hiker from Tokyo), and I decided to camp out at the Lutheran church, which lets hikers stay in their yard for free. They had the fastest wifi in town, and also gave hikers bottled water. Mechanic and I got breakfast together at the local greasy spoon in the morning and decided to postpone getting back on trail until the heat of the day had passed, around 6pm.

Hikers hanging out in front of the laundromat in Chester.

Silver made a cardboard hitching sign that just said, “Didn’t you read Wild?” The photo became the top post on r/pacificcresttrail and was very popular on the Facebook page. I was pretty proud because I took the photo, even if I didn’t make the sign.

Hitching back out of town was more difficult than getting in, but Mechanic and I managed it (I had him stop waving his hands and trekking poles like a madman before we finally got a ride). I only went about an hour into the forest before getting to a campsite with Sweet Cakes, who had just gotten back on the trail after vacationing with her boyfriend’s family for a week at the beach in South Carolina. There was a dirt road leading to the camping area along with an ATV, and we didn’t feel comfortable camping alone so we got a secluded space to ourselves. “I never feel unsafe around thru hikers, it’s just the non-hikers that make me uncomfortable.” I agreed with her.

Following that thankfully uneventful night we entered Lassen Volcanic National Park, the fourth of seven national parks the PCT traverses. Unfortunately, the trail doesn’t pass through the geothermal areas for which it’s famous. We did, however, get a couple hours of hiking along the park’s spectacular skyline. Some people got off trail to hitch to summit Lassen Peak, which is a short hike. It felt pretty great zooming past all the day hikers with my larger pack.

On the trail we always complain about how heavy and big our packs are, when in reality we all pack pretty light. It’s called “packorexia,” and is typically cured by seeing the John Muir Trail hikers with their aluminum folding chairs. Unlike the AT, the PCT is comparatively inaccessible and consequently gets fewer day hikers and weekenders. It’s a bit of a shock to the system seeing all the national park visitors on “our” trail. They usually have no idea what the PCT is, though from what I’ve heard before Wild got popular even fewer people knew about it.

When people do know about it, the older guys go on about how we’re not really backpacking and how easy we have it with technology, all the advances in lightweight gear over the past decade, and dehydrated food. At the risk of not being humble, I don’t think there’s any way to make a five month hike through the mountains “easy.” My father backpacking even in the 70s in New Zealand knew carrying canned food was stupid. Very few of us carry dehydrated food unless we prepared it before the trail and mailed it out to ourselves. Most of us have instant noodles, mashed potatoes, or beans for dinner, most of which were available in the past. I did meet a guy recently who eats raw potatoes on the trail. We never remember his trail name, but rather just call him “that guy who eats raw potatoes.”

The Lassen section was cool, but then came the dreaded Hat Creek Rim. This is a 30 mile (48km) waterless stretch, the longest on the 2015 PCT, in an exposed section that’s supposed to be the hottest part of the entire trail. People generally resupply and fill up on water at Old Station, which is just a gas station and cafe. I hung out and weathered the afternoon thunderstorm there with Stummy and Stinger, the latter of whom has done all three of the big American long-distance hikes (Appalachian, Pacific Crest, and Continental Divide Trails).

There were some adorable dogs at the gas station. Stummy is definitely a dog woman, and after lavishing attention on one casually asked the owner how much it eats each day. The guy was midway through an answer but then said, “Hey, you can’t take him with you!”

The other two headed during a lull in the storm to the Subway Caves, which are some nearby lava tubes. I stayed and waited out the thunderstorm at the gas station while eating a ridiculous amount of food. Some teenager made a show of plugging his nose when he walked by me, the little shit.

Later, a woman came up and tried to give me $5. I realized I must look pretty homeless, and it didn’t help when some guy came up and gave me the rest of his food from the next door cafe. When the storm came back during my subsequent hike along Hat Creek Rim, I ended up taking a break in an outhouse. Probably didn’t help my smell.

Heading out to Hat Creek Rim during a lull in the storm.

A trail angel maintains a water cache at Forest Road 22, and it’s colloquially known as Cache 22. It really confused non-hikers when we constantly talked about how much water we were going to find at Cache 22. I got stormed and rained out pretty bad on that stretch, and did the 30 miles with just 3 liters of water. It was hard to get myself to drink water when I was soaked and shivering. My boots got drenched and covered in mud.

Over the previous 1000 miles I’d been debating whether or not to continue with my heavy boots or, as the vast majority of thru hikers do, switch to trail runners. When I got sick and tired of being soaked and hiking in wet, heavy boots at the end of the Hat Creek Rim I set up camp next to a river and called it quits for the day. I kept hearing hiker after hiker pass me by and thought to myself, “I really should just tough it out like everyone else and keep going.” When the rain stopped I did just that, packing up all my gear and heading on. Just out of sight past the creek where I camped were 12 tents, with hikers saying I had the right idea to just stop and wait it out. Despite that, I went on for another hour so I could get up and immediately hitch into the tiny town of Burney.

Burney’s one of those low-elevation towns whose altitude is multiple times the size of its population. I’d reached the breaking point with my boots and, after waiting 45 minutes for a hitch into town and reuniting with Beer Goddess, decided to take the bus to Redding for the day to get some trail runners.

Although I was basically kicked out of the post office for charging my phone there after sending home my boots, the trip was a success. I got some shoes that seem to fit me, and I managed to do 54.5 miles (88km) in a day and a half. First, though, I hitched back to the trail with another hiker in some random guy’s windowless van.

I started to have an issue with one particular blister on my toe a few days into my hike with the new shoes. Usually I just drain the blister with a needle, clean it, and then it heals overnight. This one really impeded my ability to walk and didn’t seem to heal. It probably didn’t help that I cowboy camped and was rained on two nights in a row (one other hiker slept through the ten minutes of rain). So, it kept getting wet and just never seemed to dry out. On the plus side, by stopping early from the blister I got to camp with some friends of mine and listen to their stories of crazies on the AT. Machete Mitch was my favorite. He’s a guy who didn’t carry a tent or sleeping bag, and would instead make a fire each night, heat rocks, burn his hands moving them to a pit, fill up the pit with dirt, then sleep on it. Since he did this repeatedly through the night he never really slept, but did nap on the path in the middle of the day. He also tried hunting squirrels with a slingshot, but apparently that didn’t work out well.

I’ve spent two and a half days in the city of Mt. Shasta waiting for it to heal. So far it seems to be pretty good, and I’m hoping all will go well when I get back on trail tomorrow morning.

Shasta is a pretty weird town, and definitely is hippie central. There are crystal healing shops everywhere, and you can hear people on the street talking about stuff like “the balance of male and female energy.” There are also a ton of drifters. I’ve never seen so many homeless people in my life. I heard they all congregate and camp near the river, and that hikers are welcome there. We all decided not to go join them, but they’re friendly enough. A drifter who introduced himself as “the black man” told a couple friends of mine that if they slept on the porch of the pizza shop they wouldn’t get kicked out by the police, and they actually ended up doing that. Apparently it worked out well.

I researched more into the job offer from Spain and ended up accepting it. Orientation is September 24 in Madrid, and the first day of classes at my bilingual elementary school in an affluent neighborhood is October 1. I should be well done with the trail by then if all goes well.

It’s kind of crazy to think I’m nearing the home stretch. Just a little over a week to Oregon, which most people speed through to get to the Washington Cascades. The Trinity Alps, Crater Lake Rim Trail, Three Sisters, and the Tunnel Waterfall at Eagle Creek are all supposed to be highlights of our two and a half weeks in the Beaver State.

I’ve received permission from the Canadian government to enter the country via the trail, which I’m really excited about. Canada is getting closer!