My two zero days in Mt. Shasta were nice, although I quickly got bored and wished my blister would heal and callus quicker so I could get back on trail. There are worse places to get stuck, and overall I enjoyed my stay at the Shasta KOA campground. The only negative experience I had there was when I was sitting on a couch elevating my uncovered foot. A woman with hyperactive toddlers came over and, in a very passive aggressive manner, asked me to move so her kids could watch TV. I covered my blister back up and hobbled over to a bench on the other side of the room, and after no more than three minutes her kids were bored with the television and demanding she entertain them in some other way. It was almost as annoying as when the Christian missionaries in Burney cut in front of the line at the McDonald’s and then tried to convert me, but this situation made me so thankful I can’t accidentally have children. There’s a silver lining to every storm cloud…though I wouldn’t be upset if they all got struck by lightning.

The main hiker hangout in Shasta City was the Black Bear Diner, which pretty much all us hiker trash went to for breakfast. As a result filthy backpacks and trekking poles were strewn about the lobby, giving it a very “hippie hiker open shelter” vibe that seems to manifest whenever we amass. The only thing differentiating that place from the other hiker hangouts was the absence of an overpowering aroma of marijuana and unwashed bodies. Usually, when you get to a town you just have to follow the smell of pot and filth to find the hikers.

Speaking of homelessness, as I mentioned in the last update there was a plethora of drifters in Shasta City. The Shastafarians, as we called them, were friendly enough and even offered to let hikers join them in their riverside shantytown. I don’t know of anyone who took them up on that offer, not that they owned the land rights to let us camp there, but I appreciated the offer.

After resting for a few days, my feet were finally in a good enough position for me to head out back onto the trail. Hitching along the interstate back to the trail is pretty difficult from Shasta City, largely because people usually can’t tell us apart from the Shastafarians and those who are homeless not by choice. However, I found out the regional transit authority operated buses that pick you up from town and drop you off right back on the trail. It seemed like the hikers who stood outside for over an hour with cardboard signs probably should’ve done a quick Google search before hitching, which I try to avoid whenever possible.

I’ve had pretty good experiences while hitching with the occasional exception of people who judge me for not immediately going to graduate school. I usually tell those people that I wanted to go to medical school but my parents made me travel to Ethiopia and hike the PCT instead. The question of “Why are you hiking the trail?” is probably the most difficult to answer. “Because it’s fun” usually doesn’t satisfy people, and a lot of the time it’s more arduous and painful than fun. One of my friends tells people, “The devil told me to do it through Son of Sam, my neighbor’s dog.”

Stinger and Stummy got a ride a month or so ago from a guy who said he was a ventriloquist. The driver took out a doll and used it to say, “I’m going to kill you!” Then he laughed it off and acted like nothing happened. Stinger said his hand was on his knife for the rest of the ride, and Stummy was trying to figure out how to make sure the doors were unlocked so they could jump out and roll if need be. But it all worked out.

I joked with Dana about how interesting it would be to hitchhike drunk. “Dude, don’t do it. I did it getting out of Burney by myself and got picked up by a meth head. She had a bottle of pills in one hand and her other was on the steering wheel, and she was telling me all about how she didn’t get along with her family so she was moving to Idaho and needed friends to go with her. I told her I was just going seven miles, but she wanted me to go with her to Idaho. She said there was a cat somewhere in the car, and there was cat food scattered about the cab. I saw her thumb a playlist called ‘depressed music’ and blare up that subwoofer. That poor cat is not going to survive to Idaho.”

The next part of the trail was a 240 mile half circle around Mt. Shasta, continuing the PCT’s tendency to do a lot of east/west travel. If we went in a straight line then the trail would only be about 1200 miles instead of its 2660 miles. I got rid of my camp shoes because my new trail runners were more comfortable, and I didn’t really need them for river crossings now that I’m out of the High Sierra. Plus, my shoes dry much faster than boots, so they were superfluous weight. Considering I carry only half a toothbrush, I’m pretty focused on minimizing how much weight I have on my back. It may sound ridiculous, but every gram matters when you’re carrying it up mountains. 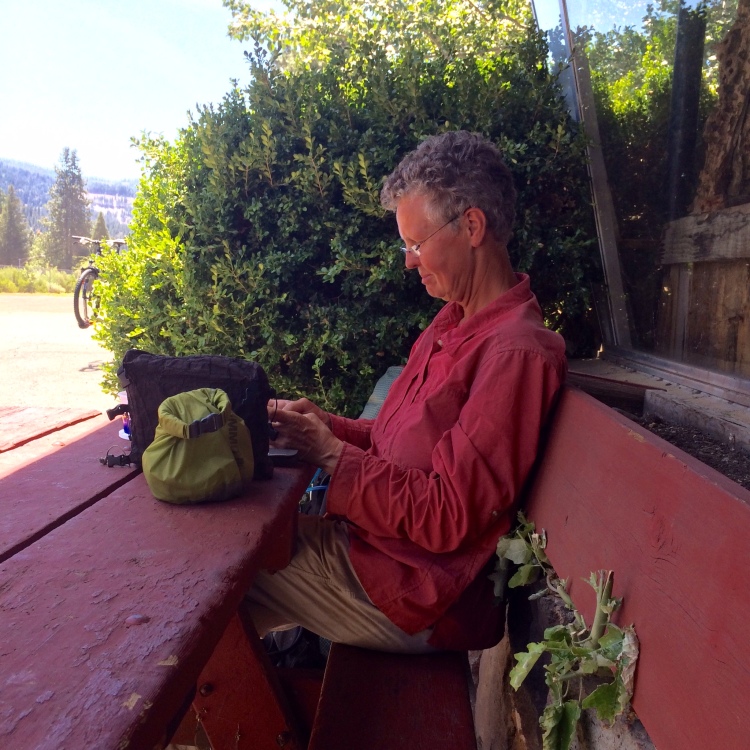 I took a detour on the trail to pass through Ammirati’s Market in Castle Crag State Park. There I picked up new socks and a water filter I’d had shipped out to me via Amazon. I also ran into Steady, the retired woman I met in South Lake Tahoe after we had to hitch around the Washington Fire. Steady isn’t the fastest hiker on the trail but, true to her name, she’s consistent. “I see all these young guys doing 35 miles a day, go into town, and get so drunk they stay for days at a time. Then they can only do 10 miles out because they’re so hungover. I do 25 miles a day every day, and that’s why I’m ahead of all of them,” she told me as we gorged on food outside the market.

The trail up to that point was hot, muggy, and through unappealingly uniform forests. After Shasta we had phenomenal views and walked along exposed ridges, a very welcome change.

Along this section I ran into my 68 year old hiking buddy Pine Stick! I hadn’t seen him since the Sierra Nevada. He, the retired Australian Wallaby, and I did much of the second half of the desert together. It’s kind of weird sometimes how you can go weeks or even months without seeing someone who’s just a couple days ahead or behind you.

I’ve gotten to the point where I go days without seeing another thru hiker on trail, and the next couple days I didn’t run into any others until Eagle Eye on the descent into Etna. I’d planned on hitching into Etna that night, but he talked me out of it. Etna is kind of in the middle of nowhere, even by PCT standards. You can wait there an hour or more before a car comes by, but legend has it the percentage of cars that stop for hiker trash is exceptionally high. So, with no camping close to the road and sleeping by the highway not exactly appealing or safe, we decided to camp together a couple hours’ walk from the road by a stream. It was nice getting to camp early, but I was unaccustomed to having that much free time. We’d talked about building a fire (which we afterwards found out is totally illegal because of the drought) but instead decided to go to bed before 8pm. Definitely a good choice.

The next morning we booked it to the road, where we waited an hour with just seeing a single car go by. A shirtless older hiker came by and we gave each other the “this dude is so weird looking that we are never getting a ride” look. It ended up not mattering because Eric arrived! Eric volunteered for the PCT Association back in the early section of the desert at the North Fork Ranger Station supplying hikers with water. He hiked the trail seven or eight years ago, and was now shuttling hikers back and forth between the trail and Etna.

The grand tour of Etna was concluded in about three minutes. As Eric put it, “Etna’s a dying town.” After getting my “muggle name,” as he called it, he gave me my eyeglasses my father had shipped out from Ohio. I was done dealing with putting in contact lenses with filthy albeit sanitized hands, and the delay of up to an hour it’d been causing me lately. He then dropped me off at the town’s best, and only, restaurant for breakfast.

The Yogi Trail Guide listed Etna as the quintessential hiker town. It was nice and quiet, but there just really wasn’t anything there. I hung out at the library for a bit before it opened, having seen two people I thought were hikers. I asked one of them what her name was and she hissed at me like a cat. Not a thru hiker, just a crazy woman.

I was going to try to hitch back up to town, but Eric said he’d give me a ride back in the morning with some others. It was about to storm and there was practically no traffic, so I got a bunk at the hostel and took advantage of the shower and laundry.  Eagle Eye was there, and said he hadn’t showered since Lake Tahoe…almost a month prior.

Pine Stick showed up, having gotten food poisoning along with Root Canal and Liability from the potato salad of a trail angel. There were horror stories abound of intense vomiting in the forest. I’ve mentioned Liability before, but he’s no longer a liability now that he’s turned 18. I haven’t seen him since he hiked the Sierra Nevada with his sister, but he’s a cool kid.