Early on the 4th of July I left my hostel, making the 13 minute train journey from Copenhagen Central Station to the airport. The main reason I went to Denmark was because flights to Iceland were way cheaper, and I very much enjoyed my first taste of the Nordic countries. 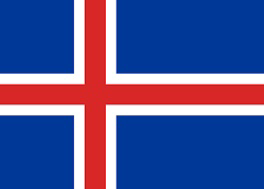 I caught my direct 2.5 hour Scandinavian Air flight to Reykjavik. From entering the Danish airport to clearing Icelandic customs I never once had to show my passport. Iceland seems pretty lax on that kind of stuff. I heard that besides the airports, the only building in the country with security is the American embassy. Statistically, Iceland is one of the safest and least violent places on the planet.

Me and my Japanese PCT buddy Courage.

Reykjavik is a 45 minute bus ride from Keflavik International Airport, which was built by the Americans when we occupied Iceland in the Second World War. My PCT hiking buddy, who I met near Mexico and was in my core group all the way to Canada, was heading to Paris as I was entering Iceland. We got to hang out for a little bit at the bus terminal, where he recommended a lot of things to do and see in the south. If all goes well, I’ll visit him late next summer in Japan.

The two of us looking a little more ragged at the northern terminus of the PCT.

I went on the Reykjavik walking tour, run by three guys who go to the University of Iceland. It was very informative, and one of the Canadian girls on the tour was telling me about her obsession with and photos of all the fluffy Icelandic cats. The guide confirmed that the dogs and cats in Iceland tend to have lots of fur to keep them warm.

A fluffy Icelandic cat I befriended.

I’d noticed that the locals aren’t nearly as tall or blonde as in Copenhagen and Malmö. The guide said it’s because the country was founded largely by Norwegian men who brought brides kidnapped from places like Ireland. So around 40% of the Icelandic genetic makeup is Celtic.

The night before I arrived 28,000 people gathered to watch Iceland play France in the quarter finals of the Euro Cup (France won). That’s almost 8.5% of the country’s entire population of only 320,000! It was an extremely unlikely series of games that led to such an underdog making it to the Euro 2016 quarter finals. In the Copenhagen hostel they delayed the lights out time because of the Euro Cup. There are posters of the Icelandic football team ALL OVER Reykjavik.

One thing that’s been a little weird so far is the total lack of darkness. It’s light all day, with a late afternoon sun at night. 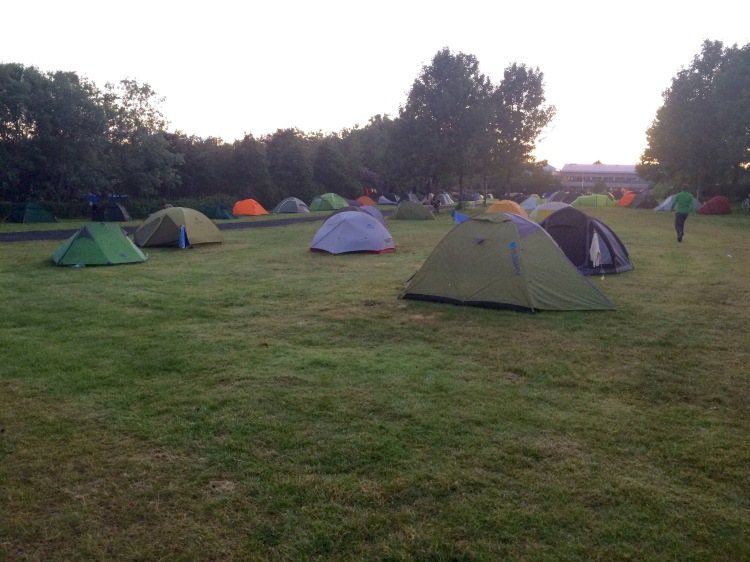 I took the above photo in the Reykjavik city campground at 2:30am when I got up to go to the bathroom.

It’s true that the Nordic countries are very expensive, but there are ways around the worst of it. I’m staying in the campground, which is $17.20 a night rather than $36 a night in the hostels, and cooking my meals. Campgrounds outside of Reykjavik are cheaper (usually around $11.40) and camping outside of towns is free.

Roughly the route I’ll be following in Iceland.

Bus travel is really costly, but I got a bus pass that covers the above route and saved me a lot. I’ll be cutting from Reykjavik to Akureyri in the north via the remote Kjolur Route and then looping back to the capital via the Ring Road over the course of around four weeks. It looks like there’s a ton to see and do on this route, along with a lot of overnight hikes of up to six days.

The grocery stores in Reykjavik seem pretty reasonable, and there are a lot of inexpensive American products that are hard to find and overpriced in Spain. Like peanut butter! The mediterraneans think it’s disgusting, so it’s only in foreign groceries in Spain, but here it’s $2 a pound. I’m definitely taking advantage of that. I did get a massive meal at the above shack, where there’s always a crowd speaking Icelandic out front. Best fish and chips I’ve ever had. 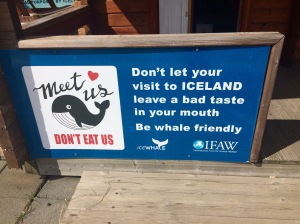 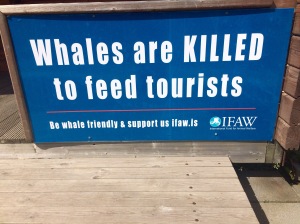 Whaling is legal and controversial.

I wouldn’t call Reykjavik my favorite place with all its sprawl, but it’s been fun enjoying the world’s most northerly capital’s bookshops, library, and subarctic botanical gardens. I’ve finally got everything ready for my round-the-island trip, and I head to Thingvellir National Park tomorrow. It’s where the settlers established the Althingi, a semi-democratic body, where the North American and Eurasian tectonic plates meet. I heard about it thousands of times in my geology classes and finally get to see it. Then I’ll head to Geysir, the geothermal area where geysers got their name, and later do a 90 mile hike in the Kjolur Highlands. 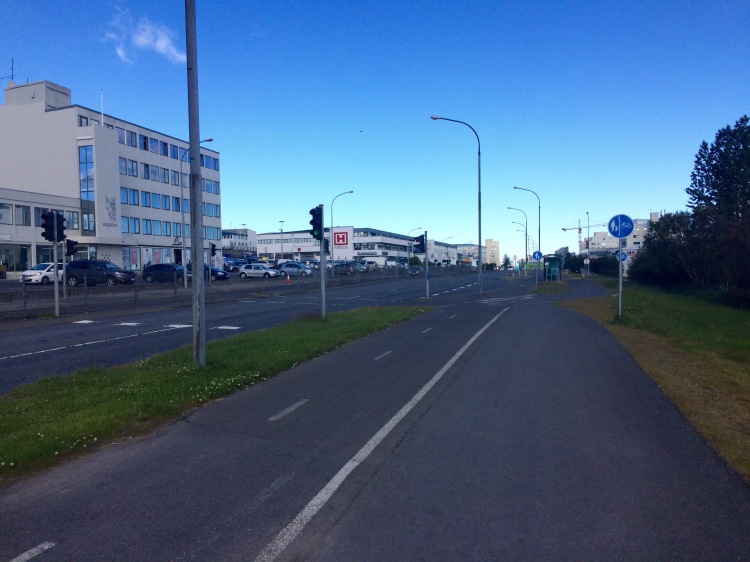 The sprawl of Reykjavik.

One thought on “Reykjavik”