Iceland with the Kjolur route in red.

Nobody lives in Iceland’s interior highlands. For over 1000 years some parts were largely avoided and rumored to be the hideout of thieves, and thus weren’t properly explored until the middle of the 20th century. It doesn’t see as many visitors since it’s off Route 1, the Ring Road, and I decided to do a five day hike through the area. It’s pretty inhospitable and surrounded by glaciers, with the only access being a gravel road open about seven weeks a year (the hiking season in Iceland is even shorter). NASA sent the Apollo astronauts near here to do some training missions since it was considered moonlike.

I packed up all my stuff at the Geysir campsite and headed over to the gas station, where a German woman my age told me she’d been waiting since the bus failed to show up the day prior. 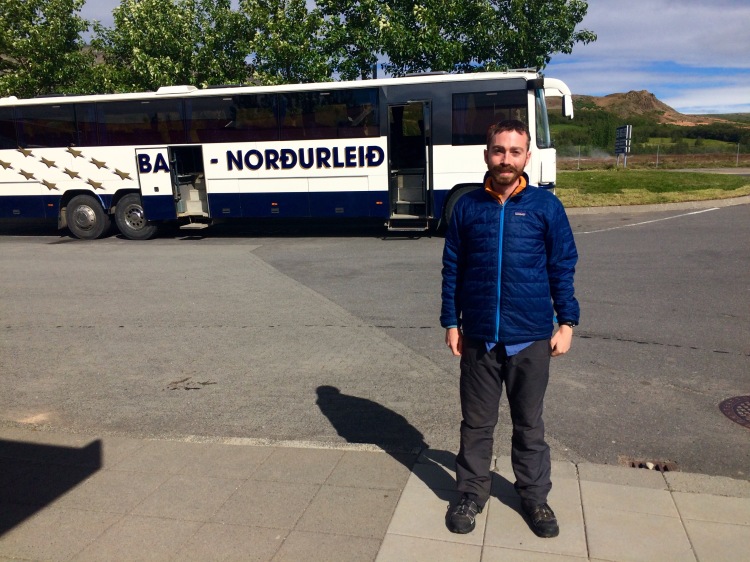 Me and the Kjolur bus.

At precisely 10 o’clock, right on schedule for our bus, one of the special vehicles which ply the interior highlands showed up and began dropping off passengers. The German woman didn’t think that was the bus. Her English wasn’t the best, so I went up and confirmed with the driver that it was our route. Pretty much all the Icelanders speak flawless English, but can get impatient with people who aren’t on their level. As the token anglophone among what seems to be the entire population of Germany on holiday in Iceland, I usually am the one to communicate and work this kind of stuff out.

The bus made a half hour stop at Gullfoss, a waterfall, and I connected to a tour bus’s wifi to quickly check the weather forecast. Everything looked good! 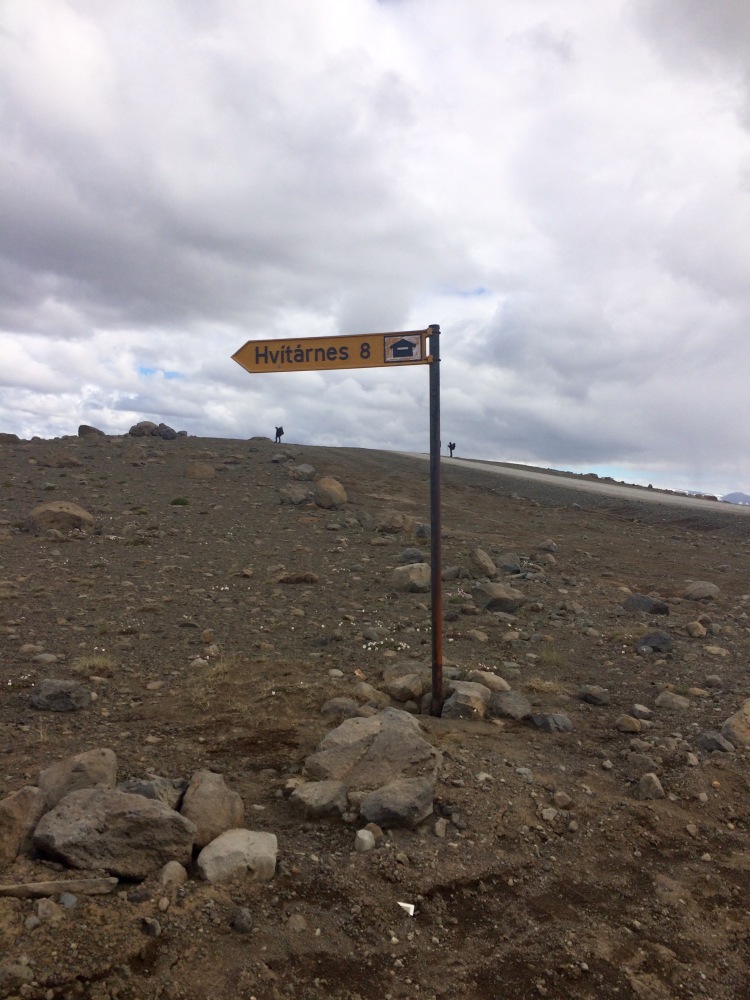 Start of the hike.

I was dropped off at noon at Hvitarnes crossroads, a junction in the middle of nowhere. At least six of the seven others were German. 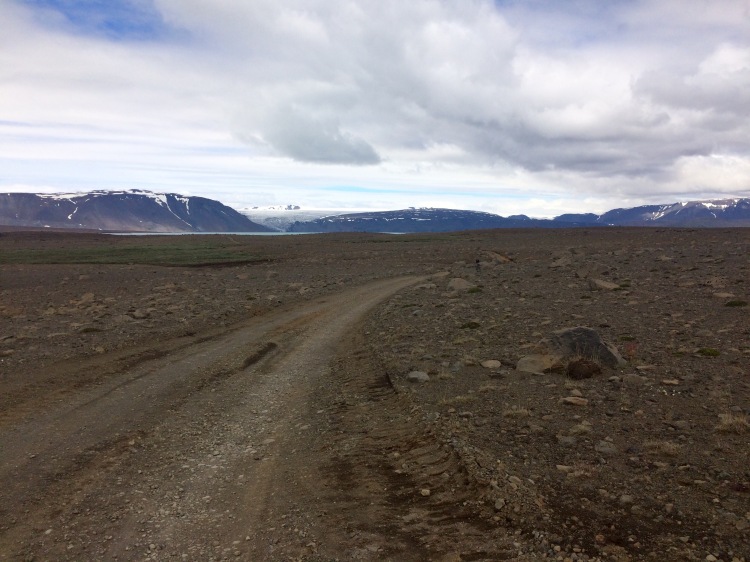 The 8 km to the Hvitarnes hut were flat, and I did the walk in about 100 minutes. I stopped at the hut to enjoy the view of the glacier and eat with a German couple, who let me try their dried fish. It wasn’t bad. 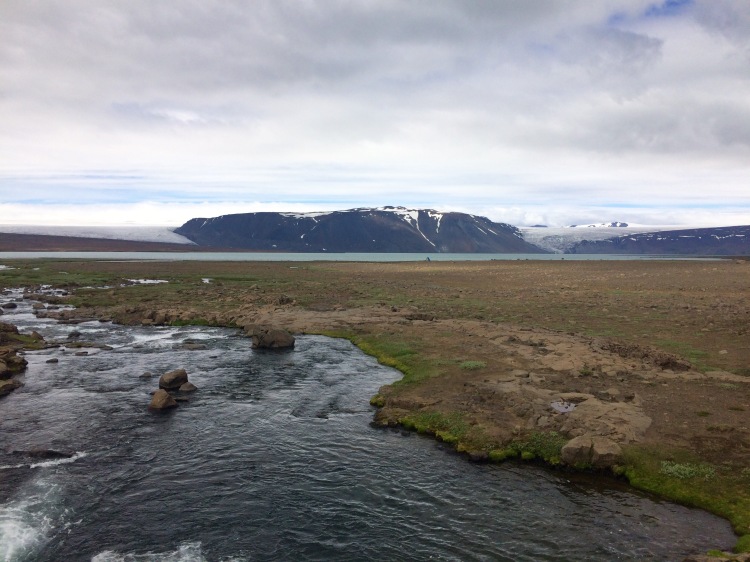 The Hvitarnes hut is reputedly haunted. They say there’s a female ghost who harasses male hikers in the night if they sleep in a bed. The Icelandic hut association hired a priest to come and perform an exorcism-type ceremony not too long ago, but she’s supposedly still there so I guess they wasted their money on a quack.

The next few hours took me along a river through more barren flatlands. While everyone else split from the trail to stay at the hut, I kept on going a couple kilometers and set up camp just as the evening rain started.

Even though it’s light out constantly, it still gets fairly cold at night (and the high has been around 6C/43F each day with constant strong winds). I bundled up in my four layers and continued following the river to the next hut, where I took a break in my sleeping bag in the rare sunshine for an hour and a half.

I didn’t go in the hut because I wasn’t sure if a warden would pop out of nowhere and charge me the $40 or so hut fee, but the German hiking club didn’t seem to care. In the future I’ll have to see if I can do the same.

The path (really a sheep trail) meandered between some mountains to arrive at Hveravellir, a roadside rest and geothermal area. They charged a very reasonable 500 kronor (~$4) to shower and wade in the hot springs with the rowdy French school group.

It was so relaxing that I considered staying the night, but instead I filled up on water and began the 25 km dry stretch across the barren moonscape.

Navigation isn’t that hard when you’re traveling across a flat unvegetated valley with two massive glaciers always in view, and I had no trouble orienteering my way across the lava fields with my compass. All those Boy Scout orienteering courses came in handy. Again, I set up camp right as the rain started.

I woke up to stronger and wetter winds than usual, and immediately set off across the foggy landscape. My orienteering took me within 5 meters of my target, a monument dedicated to five people who died of exposure at that spot in the 18th century. From time to time the bones of all their livestock pop back up.

After a breakfast break at the mouth of a cave away from the wet wind, I shot west and linked up with the Kjolur Route. The gravel Kjolur Route links Reykjavik to Akureyri in the north, cutting across the interior.

I followed the Route the rest of the day, dodging the very occasional car and taking shelter from the wind behind a massive boulder near the intersection to Kerlingarfjoll. I hiked an hour before setting up my tent in a sheltered area near a waterfall.

I hardly slept at all because the wind was so strong it felt like half a dozen people were shaking the tent all night. The last 7 km to Kerlingarfjoll were on a gravel road, and upon reaching my destination I had to make a decision: hike a 47 km route around the Kerlingarfjoll mountains or just do day hikes. 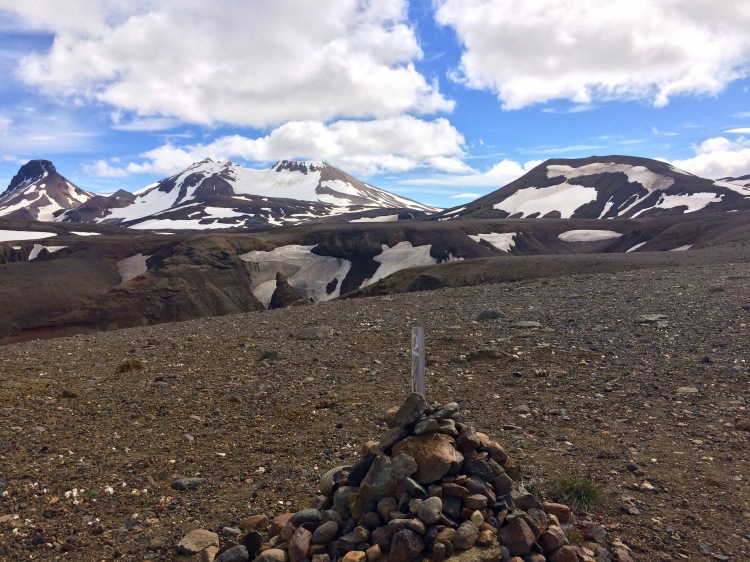 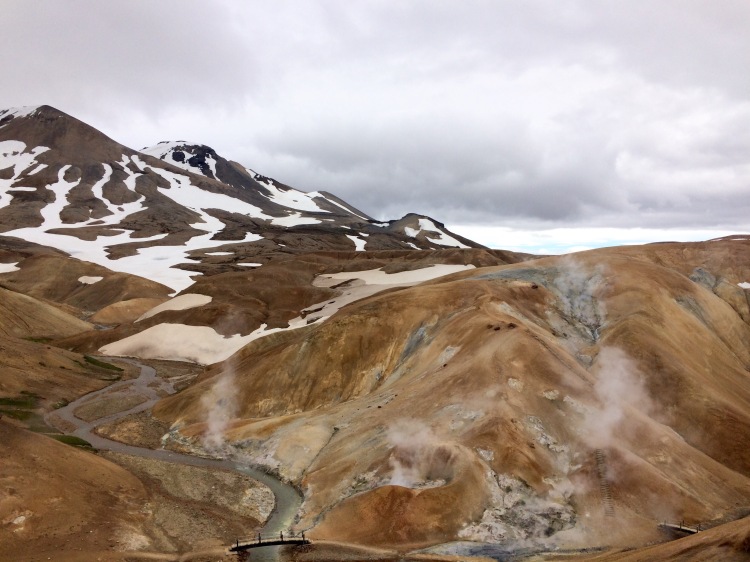 Much of the circular overnight route was unmarked and required fording rivers followed by steep scrambles up stony ravines at a decent altitude (for Iceland). I decided against that route because doing it by myself while sleep deprived, cold, and wet without a trail in an area with few hikers seemed like not the best idea. Instead, I opted to explore the area through day hikes! Which was a great decision.

One thought on “Kjolur Trek”