Sunshine again this morning! But the ranger said it would be like yesterday in terms of afternoon rain. 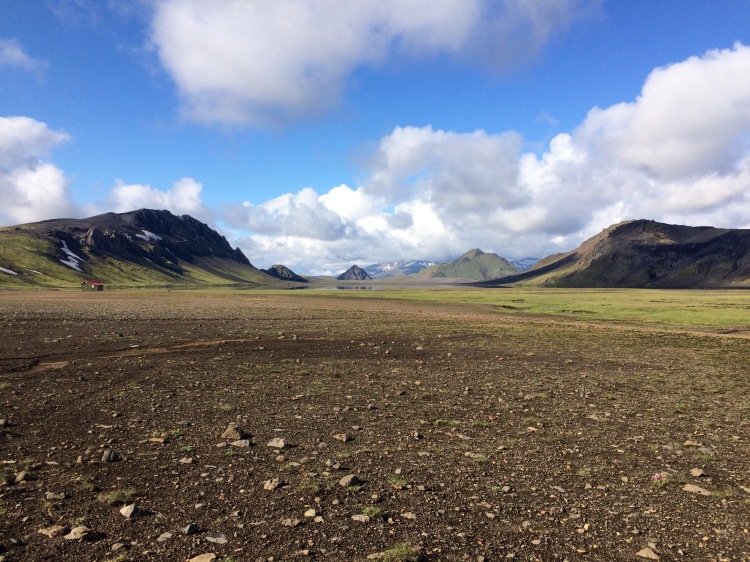 Looking back at the hut.

It was an easy climb to the penultimate hut, which being directly on the pass surrounded by snow with lots of wind looked like it was in the running for “worst camping choice ever” award. The ground was rocky and people had built windbreaks out of volcanic material.

Looking down into the valley after the climb.

Getting closer to the pass.

I hung out in the shelter of an open faced cooking hut with a French couple who were heading south. 99.99% of people I meet on the trails here are German or French. I did meet an American for the first time in almost a month, and we talked about the AT (he was wearing an Appalachian Trail hat). 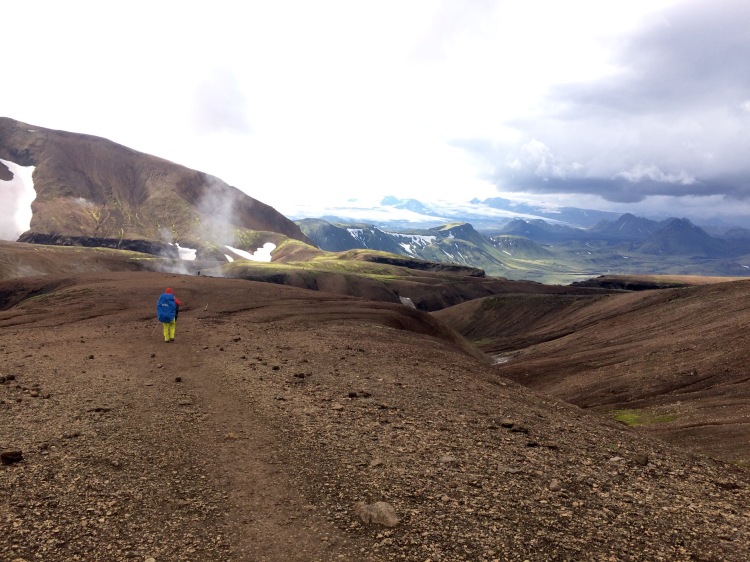 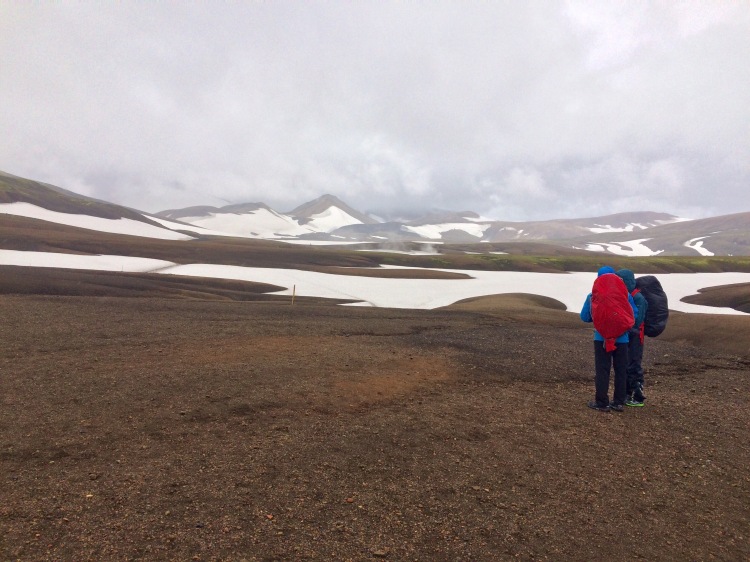 There was a steep ascent, which I did my usual thing with. I try to scale the slopes in one go as much as possible, which was a little difficult with the lack of good grading. People seemed to think I was running up the mountain as they huffed to get up, and I felt like I was back on the PCT passing day hikers.

Walking through the geothermal area. 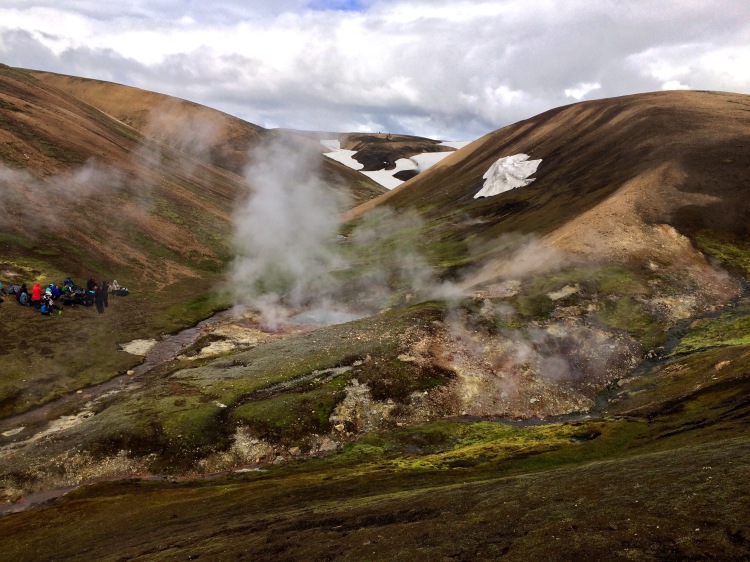 The school group was blasting pretty explicit music in English from speakers.

Today’s pass had a lot of really interesting geothermal areas, so I stopped a lot to explore. The rain clouds made me bundle up and keep going, and didn’t let up all the way down to Landmannalaugar. 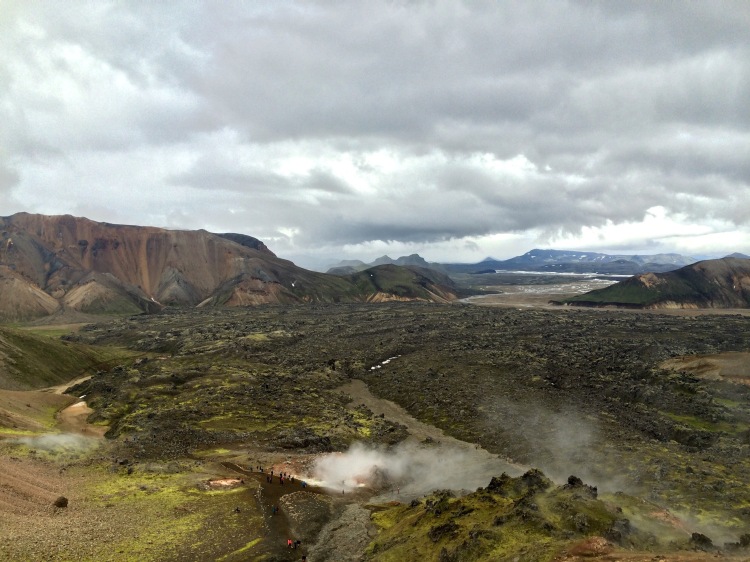 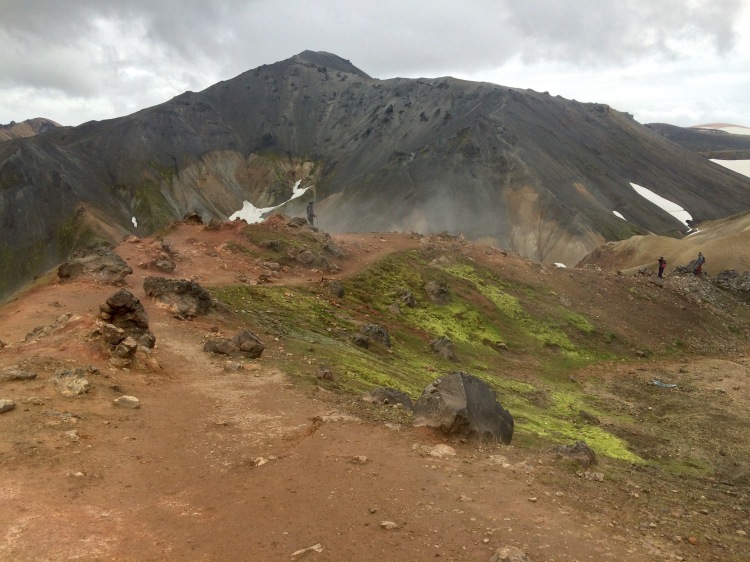 Landmannalaugar is the traditional starting point of the hike. I was going to keep on going for a few days west, but the weather forecast and apparent lack of people on that trail made me decide to skip it. I’d done the main thing I came here for, now I could go enjoy some other parts of the country nearer to Reykjavik.
It turned out to be a good choice to stay in the campground, because immediately after I set up camp it began to pour for almost two hours. There was a little lake under my tent, since the ground where I set up camp wasn’t the greatest spot in the world. I stayed dry and warm in my tent and didn’t leave until morning. 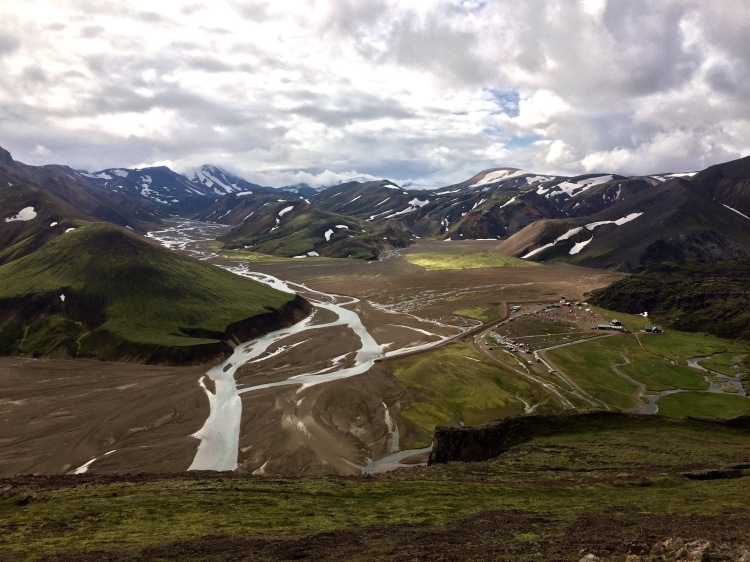 View from the day hike.

Before taking the bus back to the Ring Road, I did a really cool (and frighteningly steep at times) day hike with great views of the valley. Definitely a great three day hike, and I can see why it’s listed as one of the best in the world!