Maybe I shouldn’t write this as my hometown gets hammered by an ice storm, but at the moment I don’t really care: Uruguay and central Argentina were getting so damn hot and humid that upon arriving in Córdoba I immediately bought a bus ticket down south. Walking around during the middle of the day was unbearable and necessitated spending hours in air conditioned book cafes (admittedly what I was going to do anyways; I’ve finished six books in the past month). 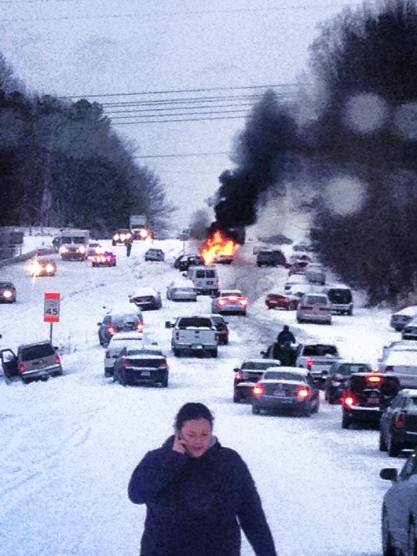 This is usually what happens when my hometown gets more than a millimeter of snow.

My main memory of Córdoba was being a stupid gringo that lost the key to his padlock. Thankfully (or not, from a security standpoint) it only took the receptionist 7 seconds plus a hammer to break it open. I accidentally woke up my Scottish roommate during the process, who turned out to just be an American with a cold and not actually Scottish. He was also sleeping in some other guy’s bed due to a mixup in bunk assignments by the staff, which made for a very entertaining scene when he came back really drunk at 2am. As the only person in the room who spoke both English and Spanish, I translated the scene for the very startled Argentinian engineering student the next morning. 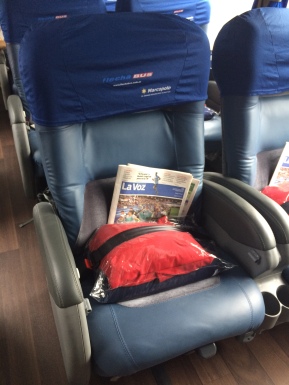 The quite comfortable cama ejecutiva seat on my 23 hour bus ride. The seat reclines 140 degrees or so.

The 23 hour bus ride to tiny Junín de los Andes was surprisingly nice, and I slept better than I did in the hostel. They did play some bizarre music videos, including one of an Argentinian guy dressed as Hitler in what appeared to be a Japanese video game. Argentina’s roads are pretty bad, so it was a little like being on a bumper car ride from the state fair, but other than that I can’t really complain about anything other than the disgustingly sweet food they handed out throughout the trip.

The main attraction of Junín is its proximity to Volcán Lanín National Park, where I was hoping to do some hikes around picturesque lakes under a volcano. The first woman at the tourist office seemed a little dense, but gave me maps and a bus timetable. When I went back to ask for a more detailed hiking map another worker looked aghast at what the first woman had written.

“There’s a weather alert in the park and it’s way too dangerous to go right now! Who the hell wrote all this on your map?!” She exclaimed as the perpetrator suddenly found something to do in the back of the office.

At the bus station, I inquired without success on available seats across the Andes to Chile. Desperate not to have to spend the next three days in this tiny town with the crazy homeless woman who kept glaring and growling at me all around the central plaza, I was able to procure tickets five hours south to El Bolsón via the picturesque Ruta de los Siete Lagos (Route of the Seven Lakes). And the next morning, after a relatively sleepless night while everyone in the local campground had a rave and blasted music until 4am, I watched the scenery change from desert to lush pine forests surrounded by snowcapped mountains. 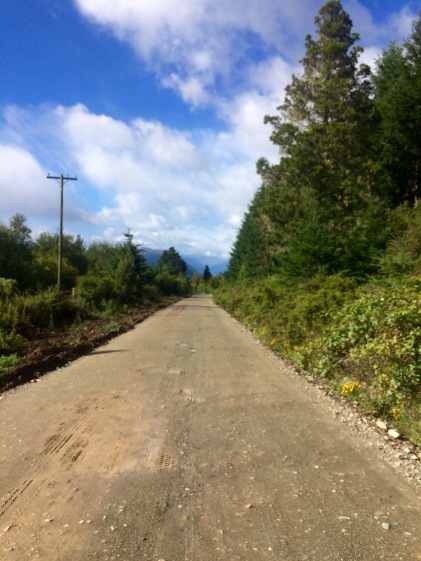 Walking to the start of the hike.

El Bolsón is a pretty hippie-ish place and, after registering my trip with the local mountaineering office and procuring a map in the undying rain, I was largely set for spending some days in the mountain. The municipal campground was again noisy, with what seemed to be air raid sirens (I later learned it had to do with a fire) going off around midnight.

There’s a bus every hour or so to the start of the hike, but the weather had cleared when I awoke and so I opted to instead walk the 8km on unpaved farm roads. A dog from the village followed me most of the way, which caused the farm dogs to go berserk. 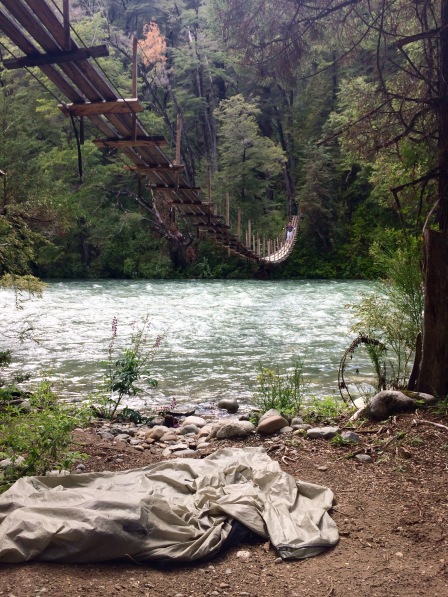 Drying out my tent next to the rickety old bridge of death.

After the rolling hills and farms, the trail began to climb. Mile for mile it was probably one of the most difficult hikes I’ve ever done, ascending at a ridiculous rate for 10km. I did it in about 3 hours not including long breaks (I didn’t want to get to the end too early), which upon arriving at the Cerro Hielo Azul Hut I was told was impossible and should take over twice that time. I replied that I hiked 4400km from Mexico to Canada and spent two months hiking solo in the Arctic, which they didn’t seem to believe. One ranger asked me about the northern lights, and didn’t seem to understand that the farther you get from the equator the more light there is in summer (and thus you can’t really see them in summer, when I had about a  month of perpetual daylight). After this I pretty much didn’t listen to what they said. 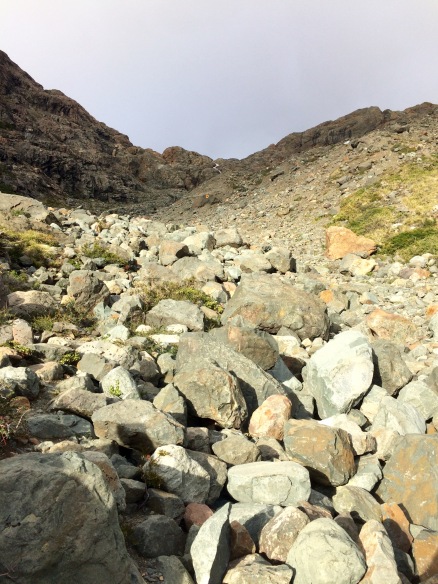 Climbing the boulders up the mountain towards the glacier.

Camping is prohibited near El Bolsón except by mountain huts, which charge about $5 a night for you to put up your tent. The Hielo Azul Hut had flush toilets and a special shelter for campers with a stove for heat, which was quite nice in the higher altitude temperatures. I spent the evening chatting with Argentinians in the shelter, where they gave me peach marmelade and the tea-like drink mate. As a gringo that speaks Spanish, I get a lot of comments about how respectful it is to come to a country already speaking the local language. People here have been very friendly to me, and as practically the only foreigner I stand out. 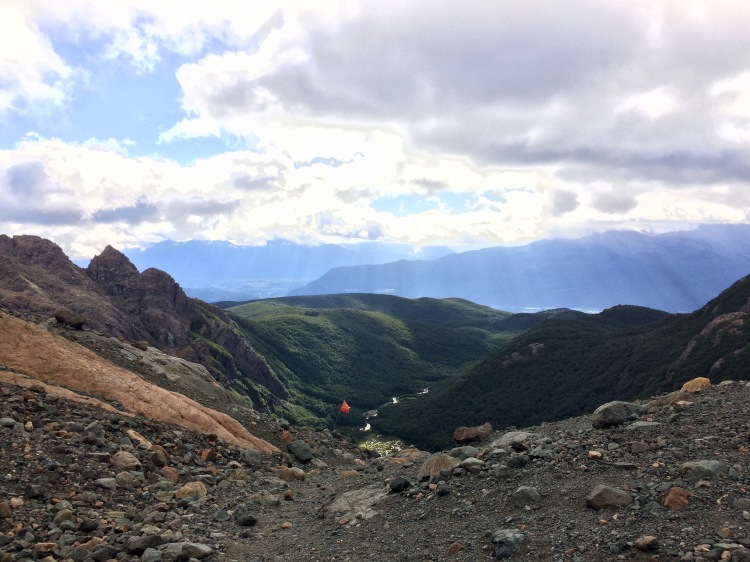 View from the hill above the glacier, overlooking the valley where the Cerro Hielo Azul Hut is.

I awoke early the next morning to ascend the glacier, a popular day hike from the hut. The ranger didn’t want to let me go solo, but relented after I talked about wandering off into the Icelandic tundra by myself for days at a time. He said it would be a minimum of 3 hours round trip, not including time spent at the glacier, but I was able to return within 2 hours including some rests. 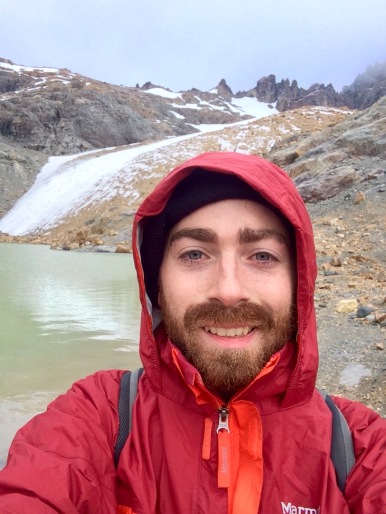 Selfie at the small glacier because I was the only one there. I didn’t see anybody going up, but ran into about 30 people while going back down.

During parts of the ascent I had some don’t look down and don’t fall, what the hell am I doing out here?! moments as it was fairly steep. Some parts I had to ascend using my hands amid loose scree. Looking back, I can definitely see how they don’t want people to go alone.

The steep climb on uneven, rocky terrain played hell on the muscles around my left knee. Still wanting to continue with my original plan, I downed two ibuprofen (aka Vitamin I on the Appalachian Trail) and was fine. 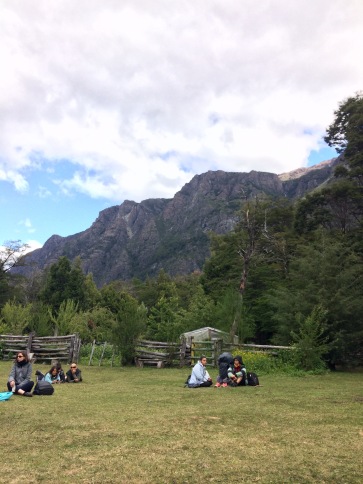 Hanging out in front of the Retamal Hut.

After a terrifying ascent and subsequent descent into the next valley, I decided to take a day off at the hut campgrounds. There are worse places to spend a sunny day than reading and resting one’s knees on a Patagonian riverbank. My Spanish sure got a workout, as all the chatty locals wanted to know what an American was doing in a popular Argentinian vacation spot. 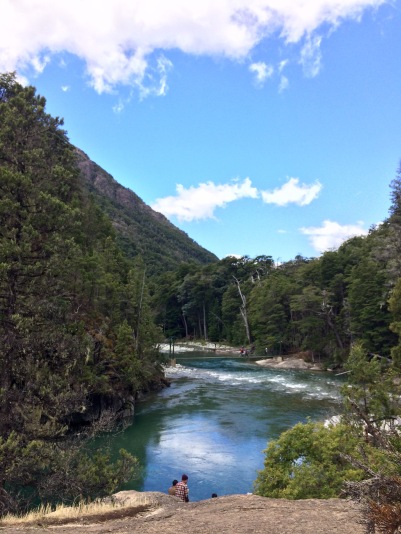 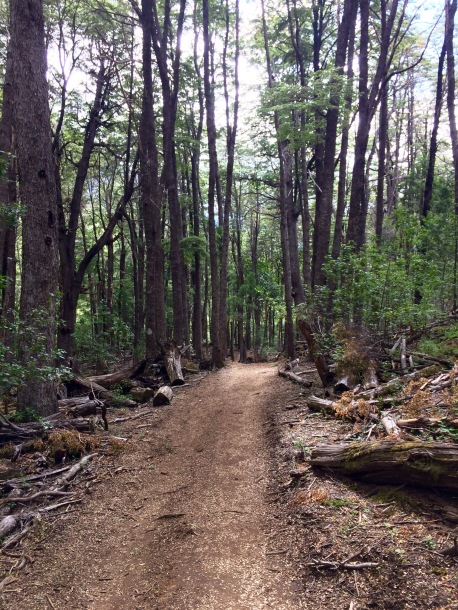 Path through the forest.

The end of the hike was very easy, and since I left the hut around 6:30am I didn’t see anybody until almost two hours later. A porteño (someone from Buenos Aires) social worker, his northeastern boyfriend, and I walked to the Wharton convenience store bus stop and asked around until we found out how to take the $2 bus back to the hippie village. They were interesting to talk to, and said that although Argentina legalized gay marriage a few years ago it still wasn’t that welcoming of a place outside of Buenos Aires. They had to go back north for work, and I was on my way to Chile, so we parted ways. 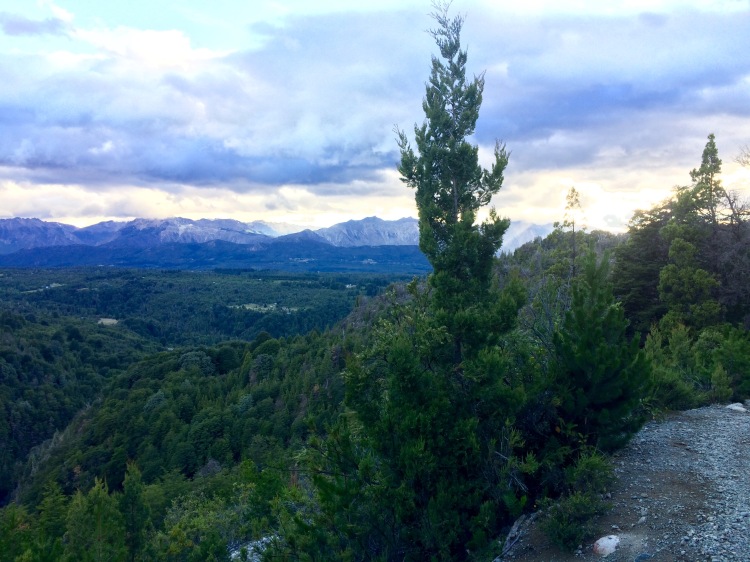 Heading down to catch the bus back to El Bolsón.