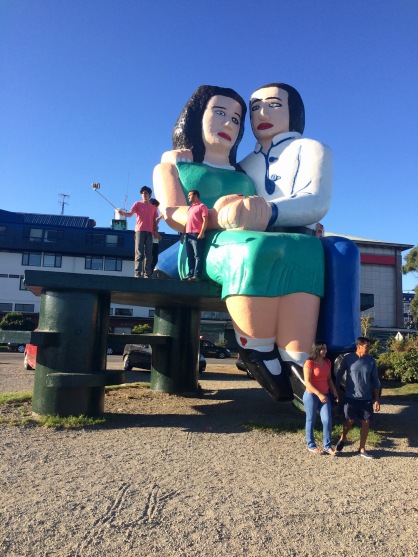 I found this in Puerto Montt, a Chilean working class town I visited just to catch the bus to Argentina. I have no idea what it is, but it scared me a little.

Argentina’s Nahuel Huapi National Park came up next on my list, with my plans for hiking further north in Chile having been dashed by the fires. It was getting too hot there, anyways. Time to go to cooler altitudes and/or latitudes.

The park is known for mountain passes with amazing vistas, glaciers, and the striking Mount Tronador on the Chilean border. The Nahuel Huapi Traverse is probably the most popular route, hopping from valley to valley and hut to hut, but I opted for a less frequented (and supposedly much more rugged) trail: Colonia Suiza to Pampa Linda, then walking over the Paso de las Nubes to Chile and taking a two hour ferry across a lake to the road.

Mount Tronador as seen from a mountain pass on the trail.

After a Bariloche steak dinner ($11 in total, which seemed super expensive, but I now realize the same thing would be much more in the US), I stopped by the Club Andino to get some more info.

Trailhead at Colonia Suiza. It took me a little less than 48 hours to get to Pampa Linda.

“You want a map?? Okay…but it’ll cost $6.” Um, yes I do want a map and that’s totally a reasonable price. Call me old fashioned, but I tend to like to know where I am and where I’m going. I had the route’s GPS coordinates in my phone, but you can’t rely on electronics.

While waiting for the bus to the trailhead, which never came, I gave up and decided to just sleep in a campground 4km from town. It was getting late, and I could try again the next day. I didn’t think I’d be able to sleep with all the noise of a campground, but the next thing I knew I had woken up from a 10 hour slumber.

It turns out the info on the Bariloche website for getting to Colonia Suiza is incorrect. What a surprise from a government website! You have to take bus number 20, which leaves every 20 minutes, to the roundabout at kilometer 18. Tell the driver you’re heading to Colonia Suiza and he’ll charge you for the whole trip, which should cost under $2 and is cheaper than paying separately. He’ll then announce when you should get off, after which you transfer to the number 10. The latter leaves every hour on the half hour from the roundabout.

Colonia Suiza is just a collection of campgrounds and little shacks selling meals at the end of a dirt road. The bus dropped me off less than a 10 minute walk to the trailhead, where I lounged for a while and had breakfast.
Ambling up through the gentle grade of the forest I ran into a young Argentinian couple I’d chatted a while with on my first hike a few weeks ago near El Bolsón, a few hours south of here. They’d spent the night at the hut just ahead of me, which seems to be a popular overnight trip.

The red Refugio Italia as viewed from the trail.

There was a sign saying to register at the hut, but when I went there nobody seemed interested so I just continued. After the hut the number of people dropped dramatically, and the route involved a lot of scrambling up and down rock faces with ropes. Not that easy with a full pack! The trail went up steeply to passes and then plunged back down below the tree line to valleys with forested trails overgrown with trees, and towards the end of the day I found it dead ended into the lake. I walked in the shallow water on the lake’s edge to rejoin the trail, after which I dried my soaked shoes and socks in the dying sun and cooked on my tiny butane canister stove. 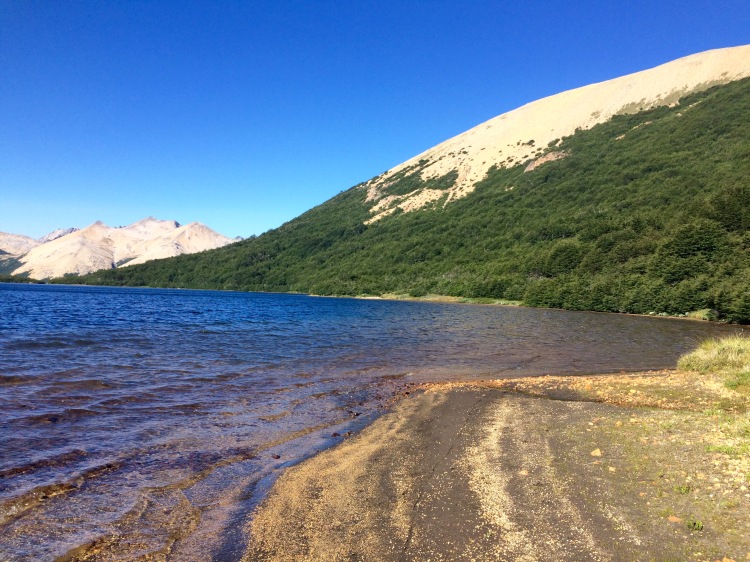 The trail just ends at the lake, so I walked in the shallow water on the edge.

Back in Iceland I would pack out hotdogs for my first night of camping. Hotdogs in Iceland are cheap and ubiquitous, and the tradition seems to have followed me to Patagonia. It’s a nice treat for the first night, and I just boil them for five minutes. After eating crackers all day it’s a delicacy.

The pass loomed above me. It’s to the west, so once I get up there I would have more sunlight descending, I thought to myself. I pack up all my things from dinner and hike on.

The trail is difficult to follow, but with the map and GPS file on my phone I’m able to manage it. It’s steep, but once I get above the marshy tree line I can see the pass and make my own way.

At the top I’m tired, and not entirely sure the route down. The wind isn’t that strong nor is it that cold, so I opt to camp right on the pass. The ground isn’t firm enough for my tent stakes to stay down, so I weigh them with rocks and fall asleep.

At 3am I jolt awake, disoriented and cocooned in fabric. There are creatures jumping over me, and they trapped me in a sack! my panicked mind screams. When I come to my senses I realize my tent has collapsed in a windstorm, and no kidnapping bears are dancing over me. I can’t find all the tent stakes, which scattered when my tent fell down, and decide to just wrap myself back up in the tent and go back to sleep. I can find the stakes in the morning, when it’s light and I have my contacts in. It starts to rain, but I’m too tired to care.

I awake at 8am, later than I’d like. It’s cold, but my water thankfully  hasn’t frozen. After putting my contacts in I find the last of my tent stakes within 15 seconds. Putting on all my layers, with socks over my hands to act as gloves, I hurriedly pack up all my stuff and hustle down the pass.

The route isn’t well marked, and I realize I have to reach into my pack to get my phone. But it’ll take a minute to power on, and I’m COLD and it’s WINDY. FUCK THIS TRAIL, AND FUCK ARGENTINA! I scream. I realize that won’t help, so I get out my phone and easily find the route. 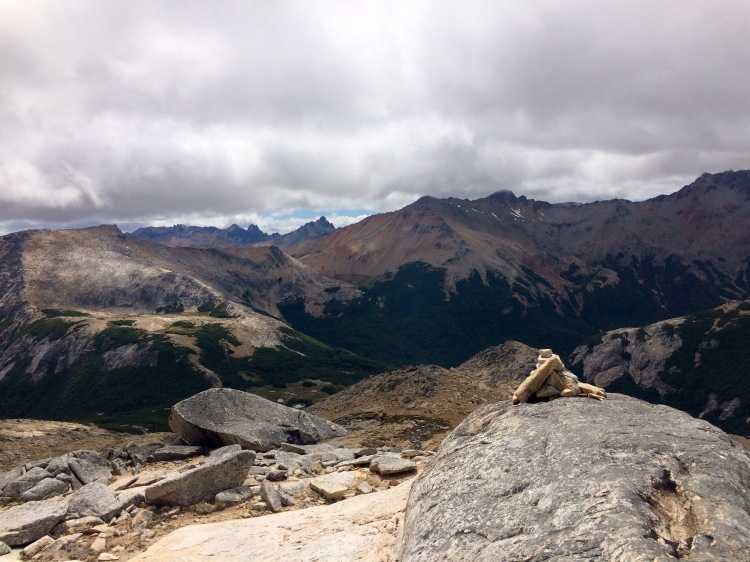 Looking down into the valley.

It leads across yet another pass, not into the valley that I had thought. After a couple hours of hiking I pull out my sleeping bag by a stream and crawl inside while I yard sale all my gear on the rocks to dry. Filtering water, I see two people below me in their campsite. I don’t know if they can see me, but I watch them for a while. Just to make sure they’re okay. Soon they’re up heading towards the next pass. 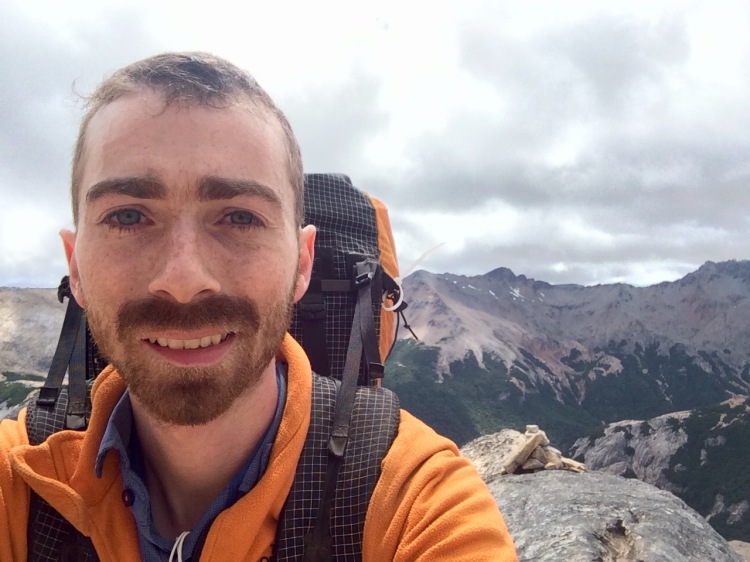 Selfie over the abyss.

I catch them fairly quickly. They’re from American Samoa, down in Patagonia for two months. We talk for a while about their hikes, and I get more info about the best way to head south. I’m meeting my cousin in Argentina on February 6th and 7th, and after that I’m taking five weeks to go down to Tierra del Fuego. But there’s so much to see and hike along the way.

The trail goes up there…somewhere.

They get cold and I head on, climbing over and descending the next pass. It’s seemingly near vertical, and going down takes a long time while I try not to contemplate the vertiginous abyss below me. I get lost at the bottom, but after a while find my way back to the route.

At a lake before the next climb I finish my book, Barbara Demick’s Nothing to Envy. It’s about the lives of defectors from North Korea who now live in South Korea, and the difficult adjustments they face. I spend most of my breaks reading, and in town usually load up lots of new books onto my kindle.

Looking back from where I came.

These passes have some pretty nice views.

The lake is so blue!

Ascending this next time is easy, because it’s up a slab of granite that hasn’t eroded as much as the other slopes. I’m able to run up this one, then enjoy the vistas at the top. *My last ascent!* I excitedly realize as I look at the elevation profile for the next part of the hike. It’s all downhill from here.

Back below the tree line I meander through forests, and the trail seems to be better maintained. There are some people by the lake, but my misanthropy takes control and I decide to keep going. I quickly cook a ramen dinner and am back on the route, camping just out of sight of the trail. I could’ve continued to Pampa Linda, but I’d have to camp in a campground. There will be lots of people and noise, so the forest is a much better place. 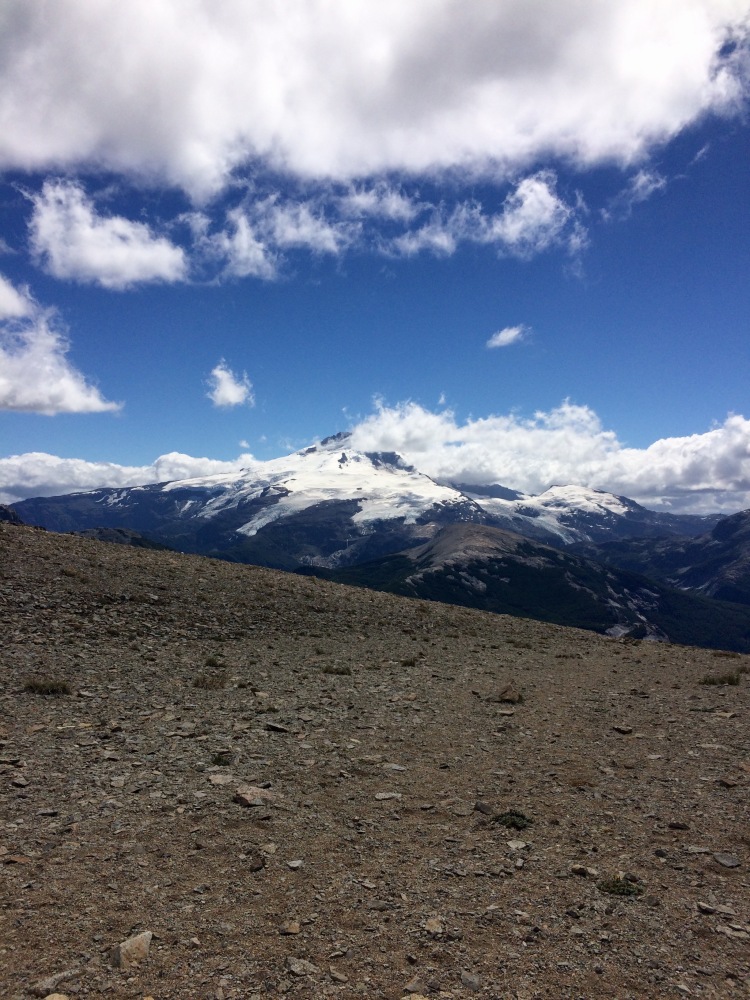 Getting closer and closer to Mount Tronador.

Leaving the higher passes to head back down to the green valley.

In the morning I’m woken up by the screaming of cows, which is a little strange. I don’t want to get up because it’s cold, but I have to go to the bathroom. The latter ends up winning and I put on all my layers, rush out, then jump back into my -12C sleeping bag.

Eventually, at 8am, I muster up the courage to hit the trail. My latest start on the PCT from camping on trail was 8am, which seemed ungodly late. I just couldn’t get myself out of my tent that day, and instead spent a couple hours reading some ridiculously awful gay Amish romance novel that was circulating the hiker community.

Out here, 8am is ungodly early for most people. Then again, I’m pretty atypical in that I hike more than 2 hours a day. I much prefer getting up early and walking until sunset. If I’m not tired out from walking all day, then I don’t sleep as well. Old PCT habits die hard.

After a very steep descent the trail levels off, and then crosses a river. Knowing my shoes and socks will dry fast in the sun, I just walk across it like normal. In Iceland I did the same thing during a storm, which made German hikers yell at me to take off my pants first (still not really sure what that was about).

This river was much more peaceful (read: I haven’t seen a single human yet today), and I meander on over to the ranger office in Pampa Linda. There’s really nothing there besides the office and a campground, and after checking in with the ranger I lay all my stuff out to dry in the sun.

3 thoughts on “Argentina to Chile on Foot – Part 1”