Ausangate is a mountain about 60 miles (100km) east of the old Inca capital of Cusco, Peru. Extending up to almost 21,000 feet (6,384m) with lots of snow and glaciers, it’s a pretty prominent part of the landscape.

A circuit around the mountain is 45 miles (72km) and used to be a pilgrimage route for the Inca, who viewed Ausangate as sacred. The trail is fairly well marked. I never once had to take out my map, though I did make extensive use of the GPS function on my phone along with the Maps.Me app. That app has the route in the free downloadable Peru map set, and fit the actual trail perfectly.

Ausangate as viewed from the trail.

Hiking the route solo seems pretty atypical, though I did it by myself without pack animals and had no problems. Most people hire transport to cut off 15 miles (25km) from the beginning and end of the hike, and also have mules carry all of their belongings. They generally do this shorter route in 4 or 5 days, though carrying all of my belongings I managed quite well in 2.5 days. The main difficulty is elevation; the trail rarely goes below 15,000 feet (4570m) with multiple passes up to 17,000 feet (5180m).

The area is inhabited by alpaca farmers. There are many hundreds of alpacas along the route, and the pastoral herders are quite friendly. Their first language is Quechua, but they speak passable Spanish.

The loop starts and ends at Tinqui, a small village with a few restaurants and basic hotels three hours east of Cusco. It used to be a seven to eight hour bus ride, but the recent completion of the Interoceanic Highway linking Peru and São Paulo has made the trip possible in less than half the previous time. Buses cost $3 and leave approximately every 45 minutes from the Paradero Livitaca, a very basic (and tiny) bus terminal near the old stadium. It’s visible on Google Maps, and taxis from the old town cost a little less than $2 for the ten minute ride. The sign in front may say Ocongate, which is a larger town 15 minutes before Tinqui, but they almost all continue on to and terminate at Tinqui.

From Tinqui a dirt road leads up towards the mountain. The glaciers and permanent snowpack of the 21k foot mountain make it fairly easy to discern, and since there’s only one road navigation isn’t difficult. There are signs marking the way to Upis, the first village in the counterclockwise direction.

Walking through Tinqui, the village where the loop begins and ends.

I did the route counterclockwise, so I started going towards Upis and came back via Pacchanta.

It’s a fairly gradual climb up away from Tinqui, passing by fields of crops and livestock. There’s a fee of $3 for the hike, which should be the only fee for the trip though herders may ask for something for crossing their land. 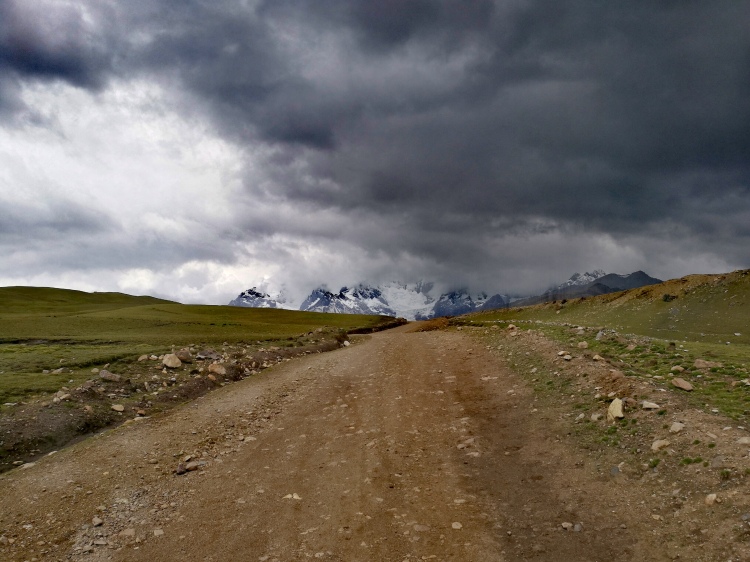 Heading towards the mountain. The clouds are growing fairly ominous, though it often rains in the afternoon here.

The trail leaves the road and jolts to the right along a footpath through a narrow valley populated by alpacas and older herdswomen. The dark clouds gave way to a light rain for about 30 minutes. I just walked on through it.

Once the rain stopped I arrived at the Upis campground, which is just an open field with an outhouse. At 1pm it seemed like most people had already stopped for the day, maybe because the sun disappeared for half an hour. You can camp pretty much anywhere in the area, which along with rain seems for some reason to really disturb most hikers in South America. Many of them refuse to hike in the rain, and will stay in their tent all day to avoid it. 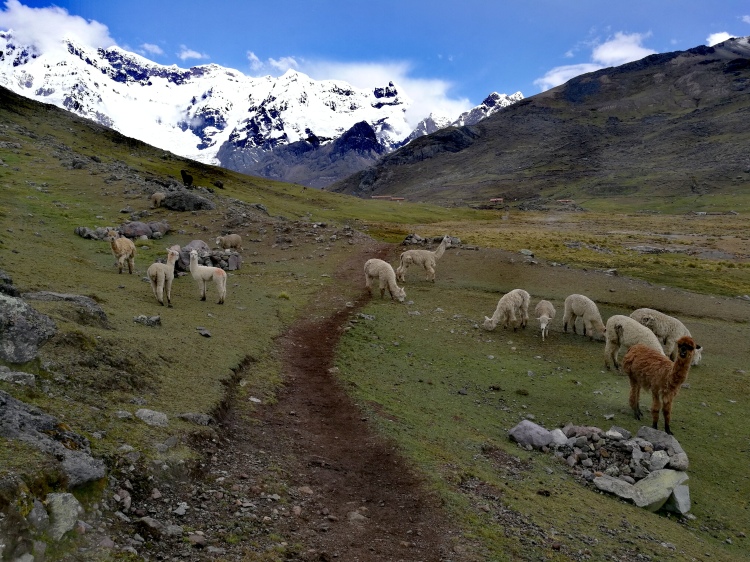 Alpacas on the way towards the Upis campground. I kept on going and decided to tackle the pass since it was only 1pm. 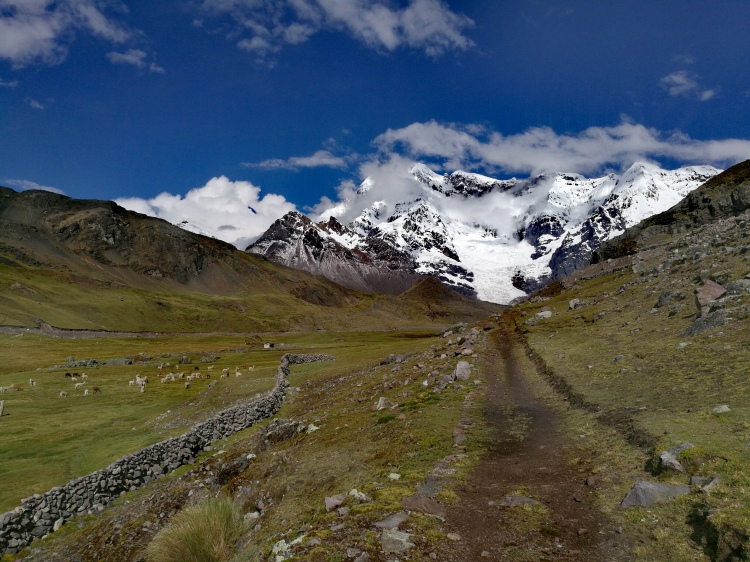 Leaving the campground for the pass, which is around the corner on the right. 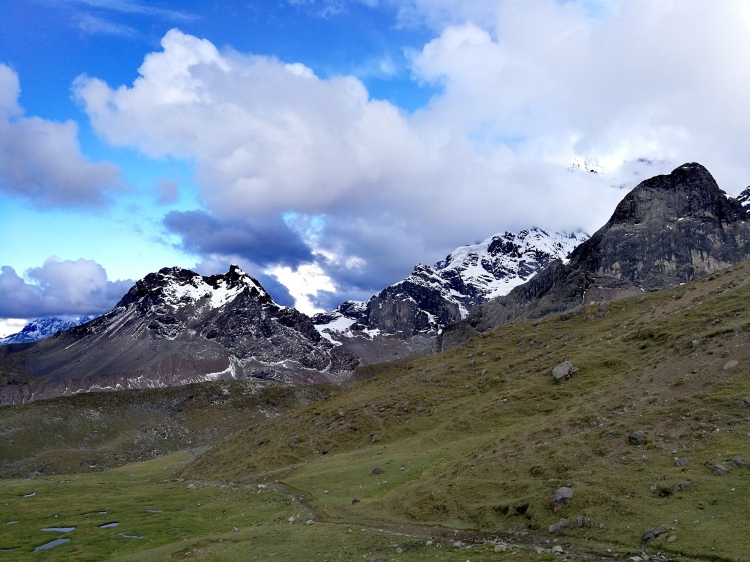 Around the time I got too close to an alpaca herd and the herd dog let me know. Throwing rocks at it kept it at bay.

The rain seemed to hold off until I got farther down, and I was glad not to have to deal with a thunderstorm at the pass. I could hear the thunder but never saw any lightning.

The first pass, Arapa. I didn’t stay long because of the thunder and approaching storm.

At 5:15pm, with the sun below the ridge and the darkness rapidly enveloping everything, I opted to set up camp. It was my first time setting up my new tent, having shipped it to my father who brought it with him when he visited me in Argentina (tents in South America are three times the weight, twice the cost, and really shitty, so I decided to just buy an American one). Setting it up in a thunderstorm was far from ideal, but it was pretty easy to figure out. And it kept me dry, which is what really matters!

I decided to go without a stove for this trip, so I just sat in my tent eating crackers and waiting out the long 12 hour night. I woke up around 11pm to see some small dog-like creature inches from my face outside the mesh of my tent, and was glad I´d brought all my food and belongings inside the nylon.

Like on the PCT, I just slept with my food (although unlike on the PCT I slept inside a tent). Except for grizzly bears and animals in high-use areas used to people, everything is usually terrified of humans and won´t approach food if you´re touching it.

Waking up, I opened my tent flap to find a great view of Ausangate in the clear dawn skies. Visibility was nil when I set up my tent in the deserted alpaca grazing grounds, but now it was shaping up to be a phenomenally clear day.

My 10F/-12C sleeping bag, which served me so well in the Arctic, kept me warm throughout the night. It must´ve gotten below freezing, since when I awoke my tent was covered in ice.

I lost the trail here in the early morning, having to backtrack a bit and cross the lake outlet to get to the other side.

With socks on my hands to protect them from the cold, I hurriedly packed up all my things, shook the ice from my tent, and headed off.

Some alpaca herding dogs stopped me from going into the next valley, but my trekking poles and some rocks stopped them from biting me. My break by a stream in the hills above the valley was abruptly cut off when the alpaca herd appeared around the corner emerged and stopped, just staring at me. It was a little surreal seeing dozens of alpacas appear and just stare at me en masse, but I knew the demon dogs from hell would be there soon. I crammed all my stuff into my pack and zoomed away as fast as I could at 16k feet (4900m) and headed toward the next pass. This hike was basically pass hopping punctuated by valleys filled with alpacas and their evil herd dogs.

I lost the trail heading down toward the next valley, but somehow managed to get down a steep hillside without slipping in alpaca dung. The woman tending the herd demanded $3 for crossing her land, which I argued over before finally paying. It almost certainly wasn´t official, but I had just terrorized her flock by walking through it and the fee was pretty minimal.

A German hiker came from the other end of the valley and passed me while I took a break. He´d just come from the Rainbow Mountain, a popular day trip from Cusco that gets many hundreds of visitors each afternoon. I´d opted to skip it since I was concerned about my first hike at a sustained high elevation, and wasn´t sure exactly where it was. I wanted to make my first hike in Peru as easy as reasonably possible.

“Maybe we’ll see each other in a while!” the guy called as he left. After 20 minutes I finished my break and almost immediately passed him while he huffed his way up towards the pass.

“This is the last pass, and it’s all downhill from here! Only 30km more,” he panted. I just smiled, knowing that there was another pass after this one and that his distance was quite off (though he might have been taking a taxi from the last village to the highway, which cuts off a few hours and is common; but his mileage was still pretty off). I decided against crushing his dreams with reality.

The pass was beautiful albeit cold and windy, so I didn’t stay very long.

My view during the break I took below the pass, in a more sheltered site.

I passed hundreds of alpaca on my way down the valley, and was accosted by five snarling dogs near a hut. They startled me, and though most of them seemed friendly one tried to lunge at me. Throwing rocks at it, I saw a woman come out and run towards me. I think she wanted money or to sell me something, but recognized that in the midst of avoiding the teeth of her dogs was not a good time to beg. This was the last time dogs were an issue for me on the trek.

The valley below the pass.

There’s a group of trekkers, with horses hired to carry all their things, to the left of the photo. They let their horses roam after setting up camp. 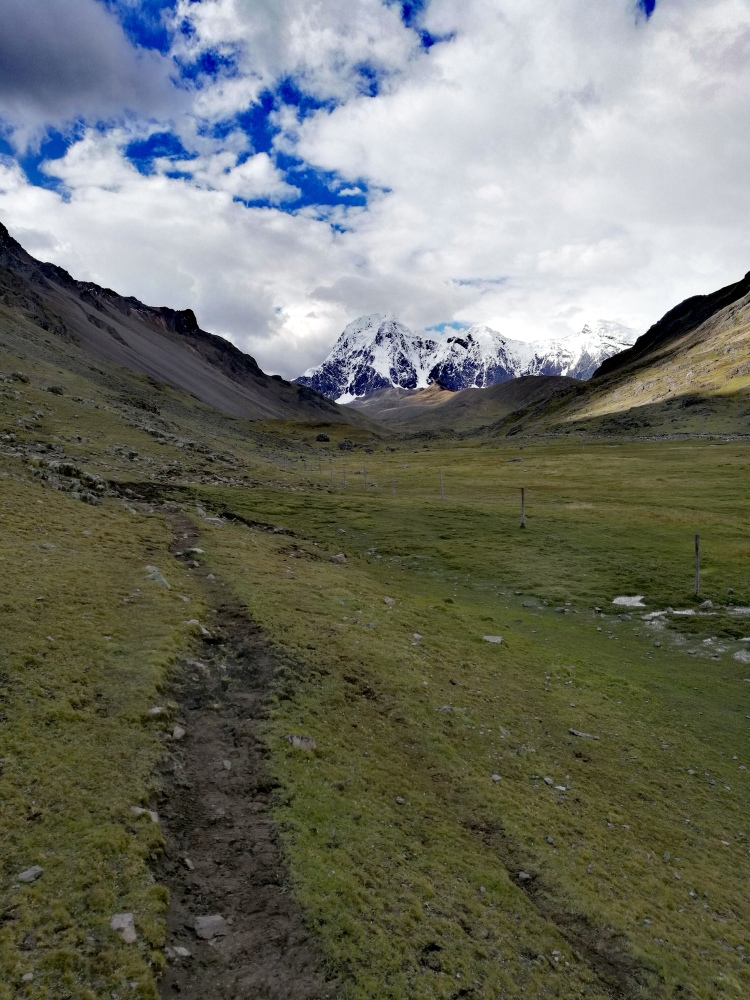 The next and last pass is up ahead around the corner on the left. I camped before it in the hopes of climbing the pass in the morning.

The trail followed a stream through a picturesque, verdant valley. One of the dogs from the hut followed me and seemed to want food, which I didn’t give it. I figured mint cream crackers and dry ramen weren’t good for some aging alpaca dog. There was nobody in the valley other than some guy who I’m fairly sure saw me while I was going to the bathroom. Turns out I wasn’t as alone as I thought.

My campsite the second and last night. Since it was getting dark I decided to wait until morning to tackle the pass, not wanting to be caught at night at high elevation without a sheltered campsite.

Going up to the pass took more time than it would have at lower elevation, but at the top I had cell service and chatted with my brothers about topics that will not be addressed here. It was the highest I’d ever been in my life, 17k feet (5180m), and was amazing.

A panorama of the last high pass.

The descent through the last valley was easy, and I quickly passed some hikers that had hired mules to carry all their belongings. They must’ve been the ones camped with the horses the night prior.

As I got closer to Tinqui I saw more and more people, including a woman who was way too old to be begging for candy. One young girl rushed out to show me her orange and white kitten, which really did not want to be in her grasp, and was satisfied when I told her it was incredibly adorable.

A hailstorm lasted 40 minutes, which I walked through while listening to BBC podcasts. Making good time, I decided to continue all the way back to the highway and catch a bus back to Cusco.