My second day on trail the sun and birdsongs had me awake by 5am. With only 16 miles to my next campsite (in the national park you can only camp in certain campsites, which you must reserve beforehand), I spent a few hours chatting with the other long distance hikers before finally hitting the trail.

Stoney Indian Pass, which the rangers told me needed ice axe and crampons, was kind of a joke. There were small patches of snow that were easily navigable, and no big deal at all.

The quality of trail was pretty hit and miss. In some places it was overgrown by brush, which scratched up my bare legs, but above the treeline it was perfect.

Glacier National Park seems to be incredible vistas with miles of dull forest trail in between.

On the PCT, a much more frequented trail, I would run into other thru hikers every couple of hours near the Mexican border. Nobody but thru hikers is out hiking the SoCal desert under the relentless sun and border patrol copters April through June. In contrast, Glacier seems to mainly be the thoroughfare of couples and groups of friends out for a hike of anywhere from one night to a week.

Walking along the lakeshore.

The second day on trail was phenomenal, and I was just so happy to be back on a long walk. The third day I began to have some doubts. Would I be able to make it to warmer New Mexico before winter hit? Would I be alone for the next five months? Could I get over Piegan Pass without falling hundreds of feet down snowy slopes? 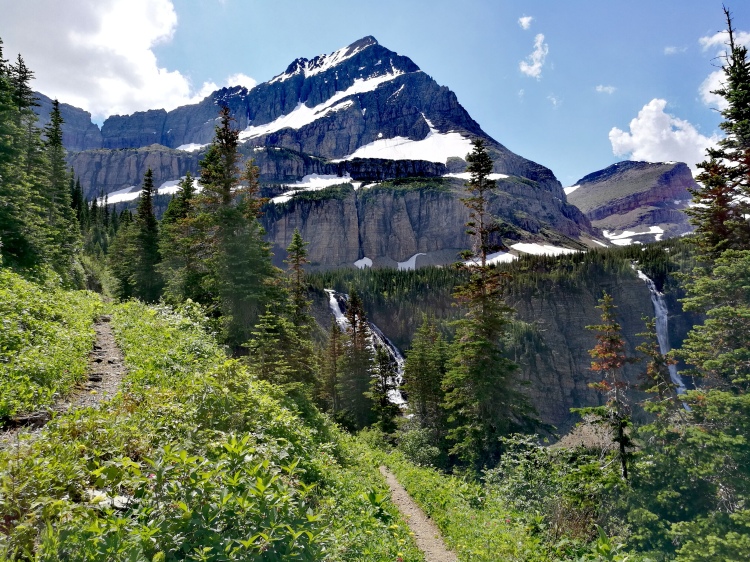 Another spectacular vista in the park.

It’s hard to get 5 months off to just go hiking, and since all the stars had aligned for me to do the CDT this summer I decided I might as well enjoy it whether or not I was solo for the whole time. The fourth day, shortly after realizing I was fine going months without seeing others, I ran into my first thru hiker. Because of full campsites, his Glacier permit had him hiking north through the park and then hitching back to the south to continue his southbound hike of the continental divide.

There are tons of different route options on the CDT, and this was a more scenic path I opted to take.

“There are two women going to Mexico just ahead of you!” he told me, and which I heard multiple times a day thereafter.

Upon reaching East Glacier, my first town stop, I was ready to take a break. My feet and legs were killing me after going up to 25 miles a day, so I opted to stay a day and a half in town to rest up. Brownies, the main hiker hostel, had and was everything: laundromat, cafe, pizzeria, restaurant, hostel, hotel, and grocery store. I love it when I can just hang out on the front porch of a place in a small town, eat, and just people watch!

Perfect time for wildflowers at the higher elevations.

My fears of being lonely on this trail came to naught, for there were 11 thru hikers in town at the same time as me. There are probably close to 20 more within a week ahead of us, and more behind.

Walking by the road to the Many Glacier Campground, where I spent a night. There was a restaurant run by my old Yellowstone employer there, and I was able to resupply, eat dinner, and have breakfast before getting back on trail. Although most of my nights were spent in backcountry campgrounds far from the road, I spent two nights in developed car campgrounds.

I finally got to meet the two women a half day in front of me that I’d heard so much about, Murphy and Movin’ On. They met on the Appalachian Trail and did 900 miles of the PCT before bailing because of snow. Movin’ On is a grandmother, and Murphy used to be a third grade teacher. They’re both pretty cool.

Just trudging along. My feet were killing me at the end of each day.

I got dinner in town with a woman I worked with at Yellowstone who’s now a backcountry ranger in Glacier, after which I got to hang out with hikers I know from the PCT who are out on this trail this summer.

Hardly any snow left because it’s been so hot lately, up to 90F/32C every afternoon! When I got to the East Glacier post office the postmistress took one look at my ice axe and crampons before saying, “Honey, I’ve shipped my fair share of these things over the years. Just hand them to me and I’ll get them to Ohio for you.” I definitely looked crazy walking around town with an axe.