Big Sky RV Park is awesome! I’d read on the CDT southbound Facebook group, where the more up to date trail info is posted (and moderated by some crazy Jesus wacko). $18 for camping and shower, they also have a laundromat.

Downtown Anaconda has been restored and preserved to look as it did around 1900.

Well, I can stay the night and decide in the morning what I’ll do next. Rest or keep going? I thought to myself. The siren call of clean clothes and feet proved too strong to resist, and I spent two nights at the RV park. After paying a couple visits to the pizzeria and eating a massive amount of food, of course. My hiker hunger hasn’t fully set in yet…but I think it’s coming.

Spotted this walking around town.

In a perfect world, I’d hang out in town until 5pm and then hike off into the sunset. Technically the sun doesn’t set here until 10pm, but in New Mexico in November I think that’ll be more apt. Sleeping in the woods is just more relaxing, but it’s 15 miles from here before camping is a viable option.

The barista at the cozy coffee shop on the main street definitely thinks I’m a hobo, and I don’t blame her. The last time I trimmed my beard and cut my hair was a couple months ago in the Peruvian Amazon. She seems relieved when I pay with cash and don’t start yelling about being possessed by evil government spirits (witnessed that on the PCT in Ashland, Oregon). 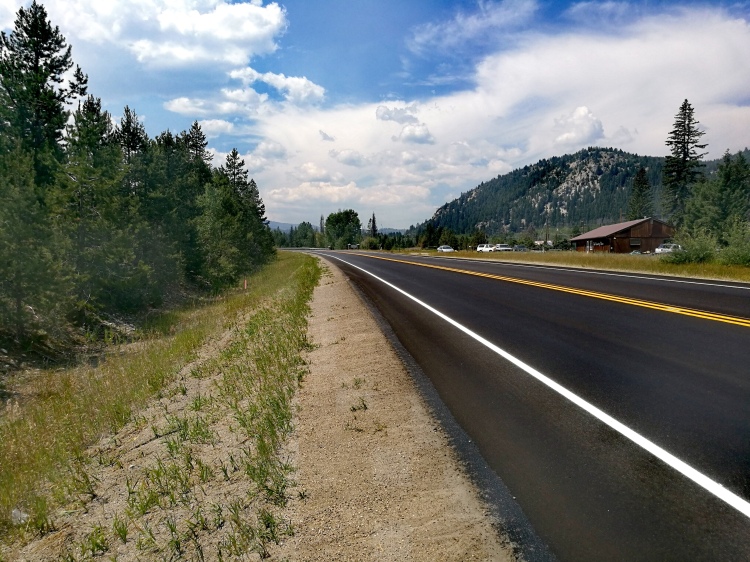 Walking on the highway out of Anaconda.

Anaconda is long and narrow, but all the places I need to visit are within a half hour walk of the RV park. It’s a pleasant place to take a day off, walking around town getting errands taken care of and watching the new Game of Thrones episode at the library. There’s no shortage of local diners where everyone seems to be a local and the waitress asks, “What can I get for you, sweetie?” 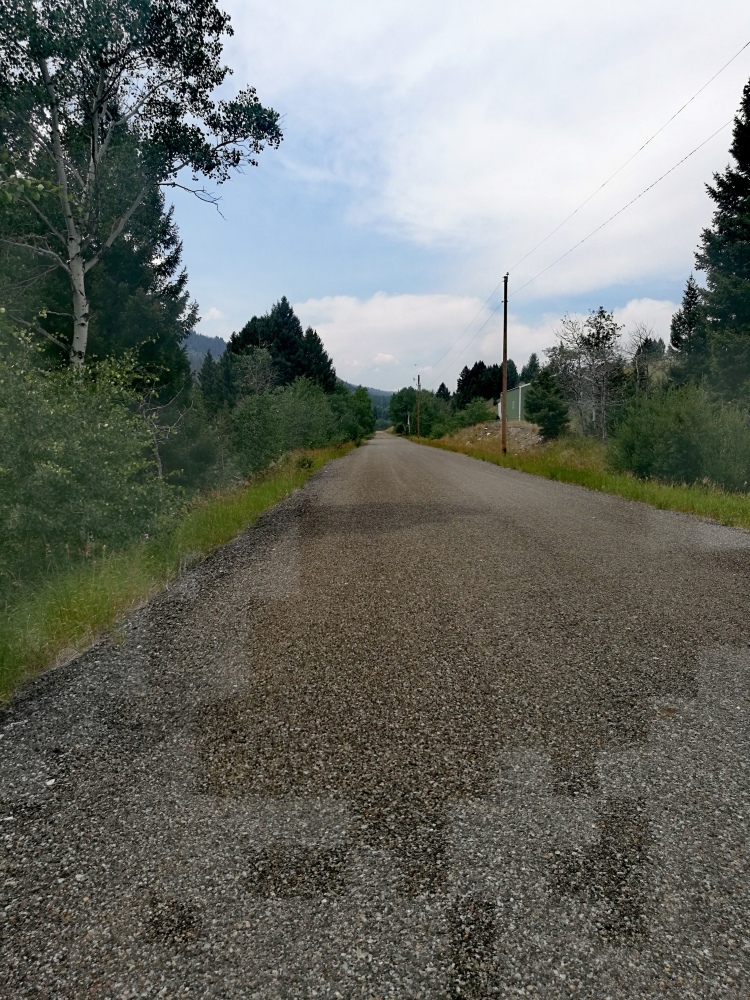 When possible, I took side roads paralleling the highway so as to avoid traffic.

The locals think it’s obvious from my accent that I’m not from here, and a lot of them (plus a lot of people from north of the border) ask if I’m Canadian. Calgary is called “the city” in northern Montana, and I’ve heard that further south that title will go to Salt Lake.

The owner of the RV park is super friendly, showing me how to lock up the office so I can use the laundry machines after he goes home for the night. While waiting for my clothes I befriend a retired second grade teacher from Wisconsin who’s on her annual summer road trip with her husband, and she seems amazed that I’m walking across the country (even more when I mention that it’s my second time doing so).

The divide is somewhere around here. The trail doesn’t always follow it exactly, but it’s usually very close.

In the morning, fully rested and semi-clean, I set off on the 10 mile road walk out of town. It’s a mile to the grocery store, where I stock up on victuals, and another 15 minutes to the gas station at the edge of Anaconda.

Arming myself with some snacks and a cup of Mountain Dew, since I remember my father saying that has the highest sugar and caffeine content of just about anything out there, I lay out my provisions on the sidewalk in front of the gas station.

Taking refuge from the rain, with my feet helping me stay on a semi-steep slope. The day before I stood under the shelter of some branches during a severe albeit brief hailstorm and stayed dry.

100 miles to the Idaho border and my next town stop…will this be enough? The eternal question. It’s so hard to gauge how much food I’ll need on each section.

There aren’t any customers inside, so the cashier comes out to chat and ask about the hike. She wishes me well when a car pulls up and a couple guys file inside, and I head off on the highway. 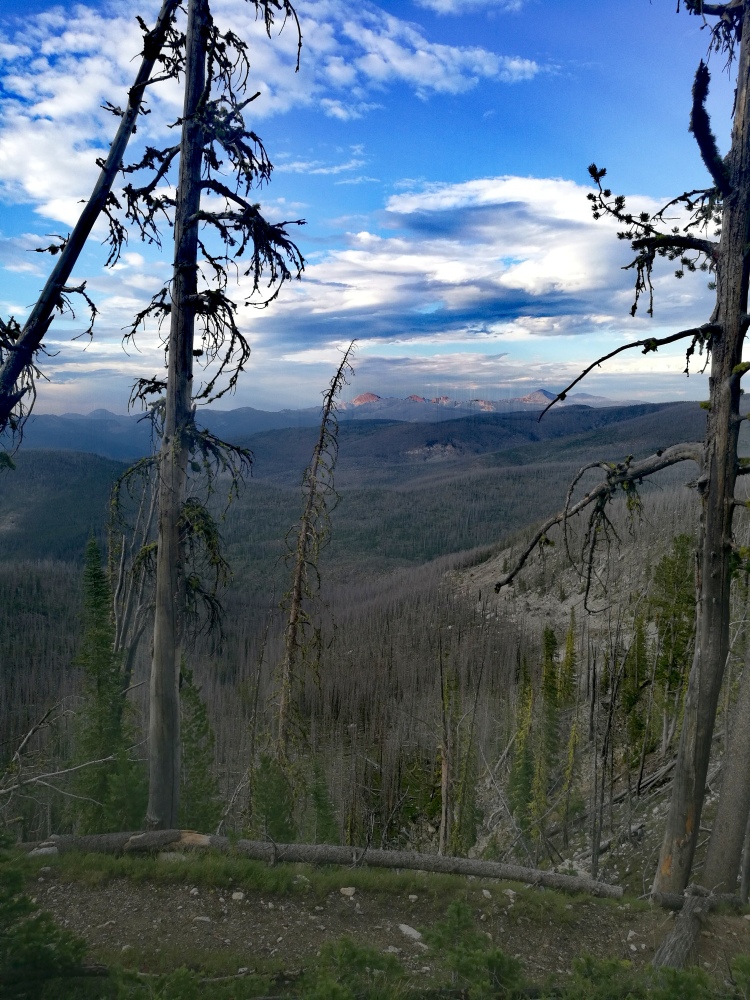 Looking off at some storm clouds.

Like on the road walk into town, multiple locals pull over to make sure I’m doing okay and that I have enough water. Montanans are so friendly!

It starts to storm when I pull off the highway and onto a dirt road, but I’m just so happy to be off the pavement and back in the woods that I couldn’t care less. 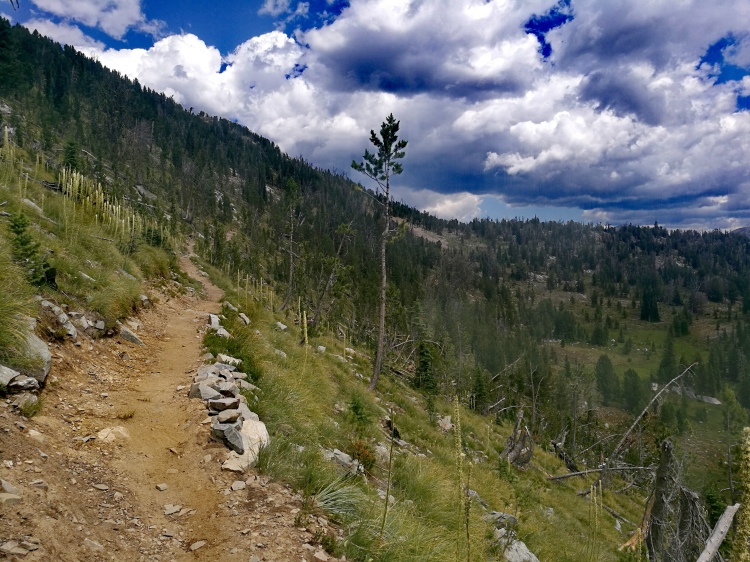 The trail was really well maintained in this section.

I camp by picturesque Storm Lake right after the storm, which seems appropriate. 25 miles in less than 11 hours, not bad. I crawl into my warm, dry sleeping bag just as the rain picks back up, falling asleep to the rhythmic drops falling against my tent.

I wake up at night hearing an animal running around. I think I hear voices yelling at it to shoo, and I bolt upright. Something is in my food, which I hung from a nearby tree! After a few seconds I realize the sounds are coming from the opposite direction of my bear hang, and I go back to sleep. Not my problem. 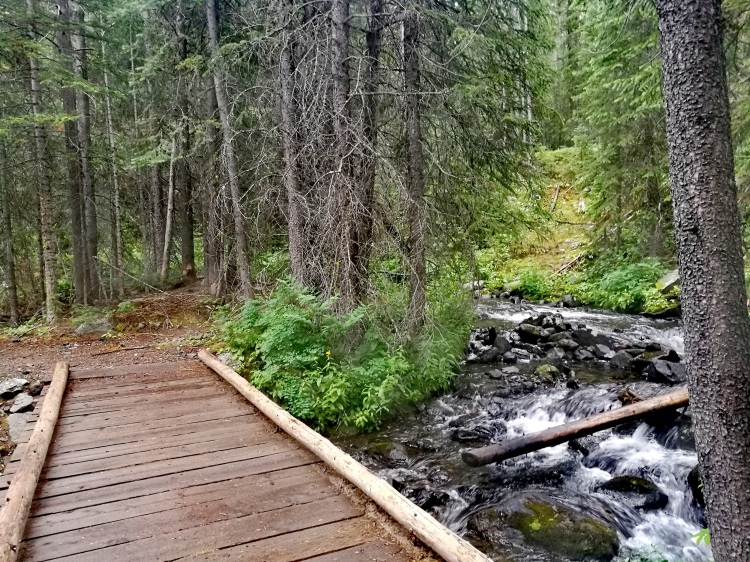 Lots of water in the mountains here.

The wildflowers were in bloom at the higher elevations.

It’s cold and wet in the morning, and I have trouble motivating myself to leave the dry warmth of my down sleeping bag. Eventually I do so, and fill out a registration form for the Anaconda-Pintler Wilderness. Never done that before, but there’s no CDT permit like there is for the AT and PCT, so I decide to play it safe. And there’s a big registration desk in the middle of nowhere, so maybe it’s important. 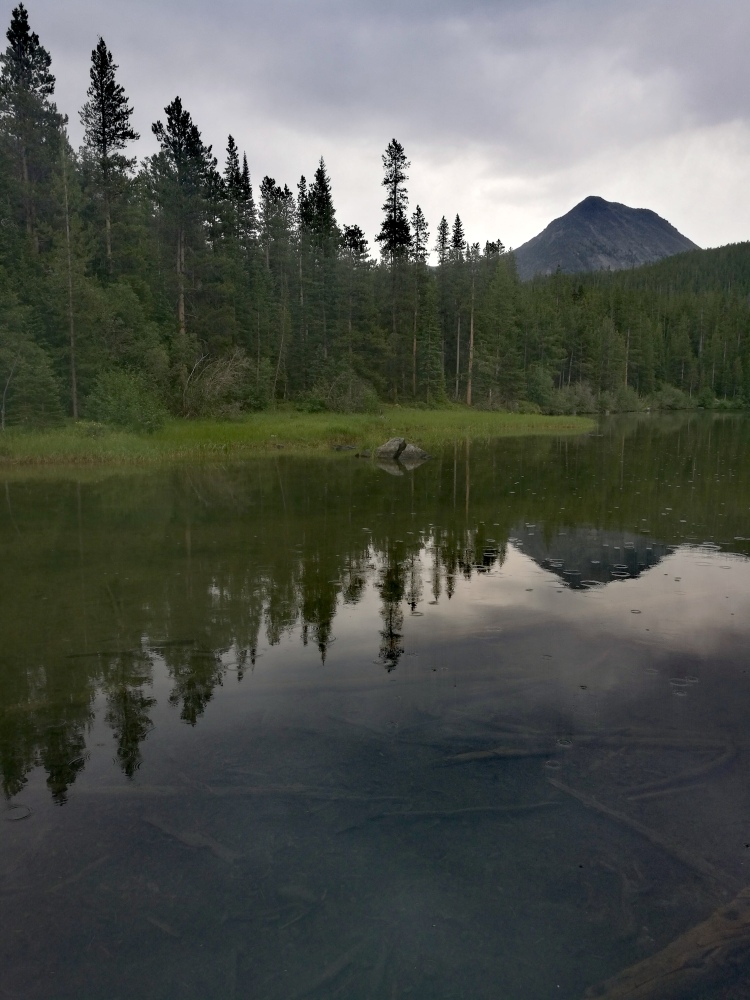 I camped at this lake. You can see the ripples of the raindrops in the water. 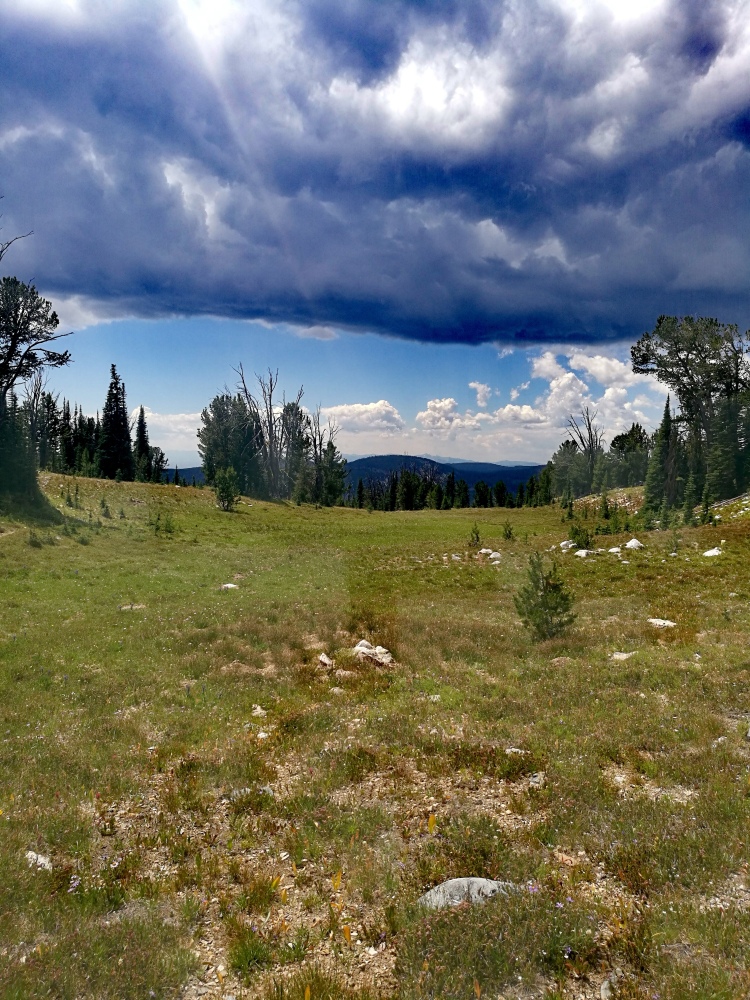 At least it wasn’t too hot and sunny!

Entry location? Canada, I scrawl. Exit? Mexico. Where will you camp each night? ¯\_(ツ)_/¯ How long will you spend here? As long as it takes.

Who knows if anybody will actually read that. I hope so.

The Anaconda-Pintler Wilderness is amazing, hopping between alpine passes above the treeline with lush, lake strewn valleys in between. The trail is well maintained, and I cruise on the soft dirt beneath my feet. Every night I camp by a picturesque lake with snowcapped mountains looming above me.

I see few other hikers here, and even go 41 hours without seeing another human. It’s surprisingly not strange to wake up and go to bed without seeing another person, maybe because there are so few people on this trail and I’m used to the solitude. I love feeling like I have the woods to myself, but it’s also nice running back into Vanne. A 60 year old section hiker from the area, I met her previously in Helena National Forest and I enjoy talking to her for an hour. 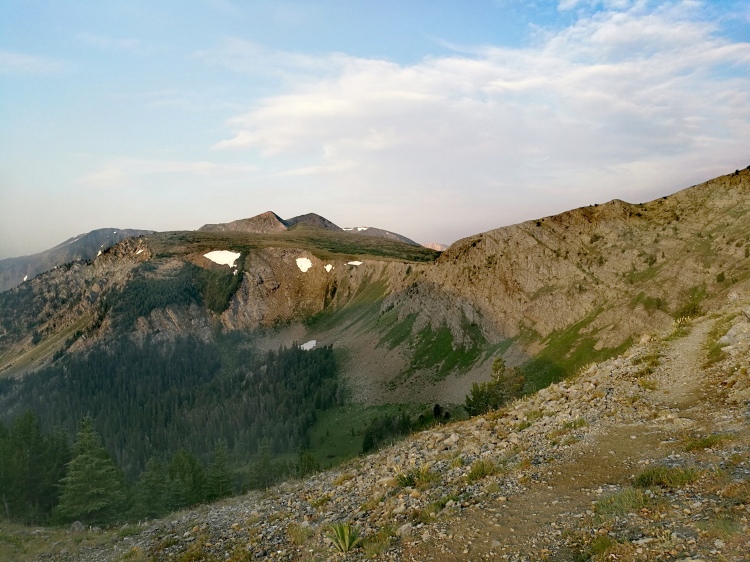 Morning on the CDT.

On my last full day on the trail before getting to the highway and the Idaho border, I stop as a small black bear runs 30 feet in front of me. We stare at each other in mutual shock for a split second before he bolts off. A few minutes prior I’d been wishing I had a coffee, but that episode does the trick of waking me up! I haven’t even left Montana yet and I’ve already seen five black bears and a grizzly since Glacier.

One thought on “Anaconda-Pintler Wilderness”