Story of the CDT: I’d planned to be at the highway to hitch into Darby, MT in the evening, but it didn’t work out that way. I was tired, it was getting late, and I decided to just camp four miles (about an hour and 20 minutes) from the road and hitch into town in the morning. 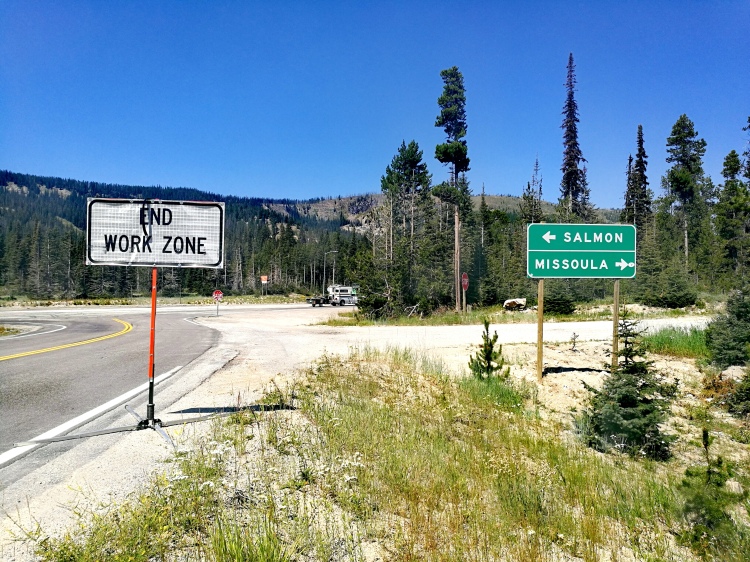 Near where you can hitch into Darby.

How long am I gonna have to wait? I impatiently wondered, thumb out, while smiling at potential rides from the side of a not-terribly-busy highway.

Seven minutes, and then I had a ride. Hitching is such a crapshoot when it comes to waiting time.

“I can only take ya 13 miles to the turnoff to the hot springs,” he said, which didn’t bother me. I’d heard it could routinely take three hitches to get into town.

“My wife does a lot of maintenance of the trail! She and I are looking forward to soaking in the thermal pools.” He noticed I’d been looking around the empty truck for her, confused.

“She’s in the car behind us,” he noted. Does she exist? Is he insane? I decided I didn’t care as long as I got to where I was going in one piece.

After he dropped me off I walked 10 minutes down the road for a better hitching spot. 45 minutes later I gave up, walking down the road with my thumb out to a further spot that looked like a better place to solicit a ride. Winter is coming, I could be eating a burger right now, I’m never going to get a ride, my dehydrated mind kept insisting.

One step before getting to the better hitch spot a car pulled over.

“I’ve got a concealed carry. Want a ride to Darby?” asked the Alaskan wedding planner, aka my savior. 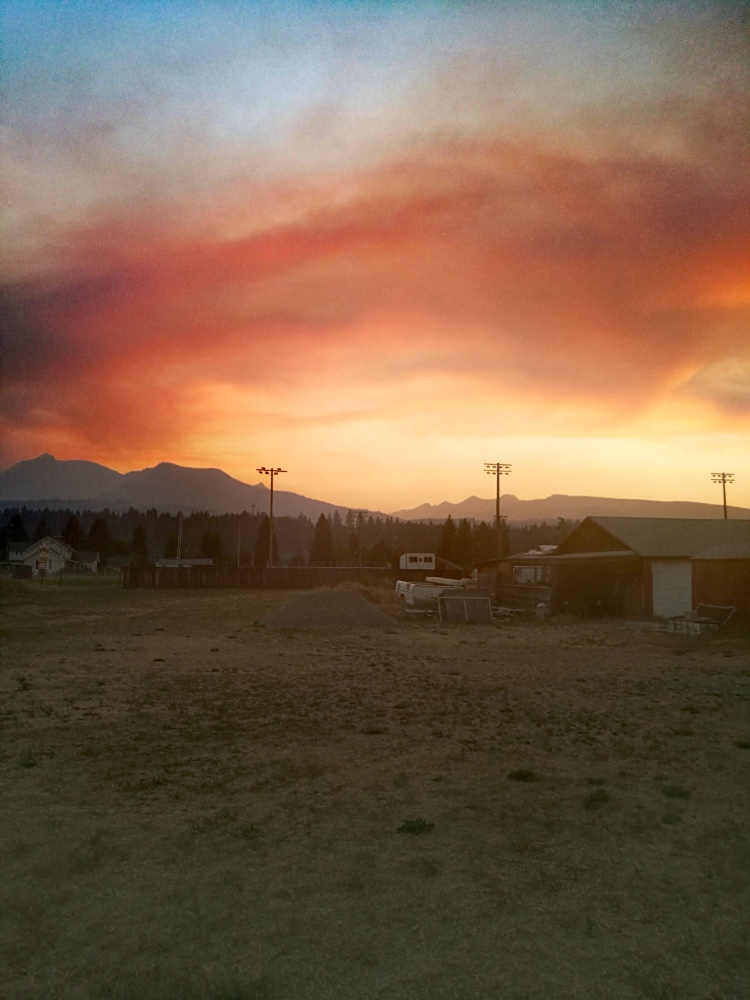 The sunset as viewed from the campground in Darby with smoke from fires.

She was fun to talk to for the 40 minute ride to Darby, which isn’t that close to trail. If I could do this over again, I would’ve just sent a package to the Sula gas station. Much shorter hitch.

Darby is a nice one street town.

“We had a 14 person group stay four nights. I hate to say this, but it’s nice to just have one hiker tonight,” the campground owner told me. Shower, laundry, camping, and wifi was $14 altogether. Not bad.

I bought food at the Family Dollar, getting such novelties as tropical sour patch kids (disgusting) and other foodstuffs (is it really food?) that other stores (probably wisely) don’t want. 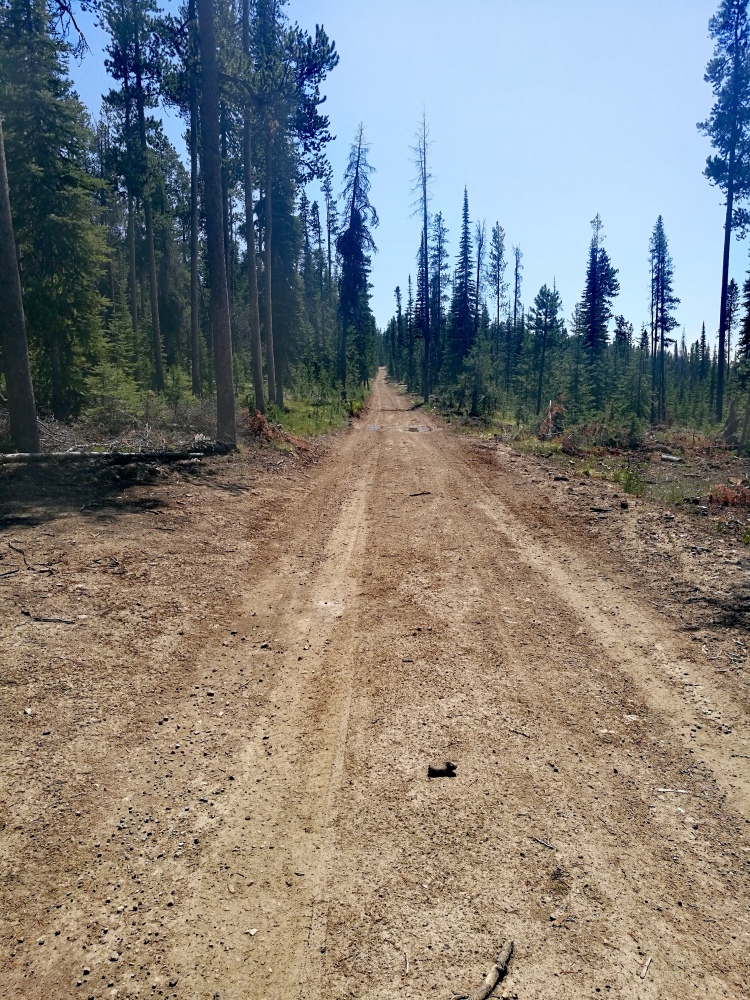 The first part of the trail was on a forest service road.

Hitching back up to the trail took over an hour of waiting and two rides, but eventually I’d made it back home.

The fire was pretty small, but close to the trail.

Soon planes and helicopters were flying right over my head, dumping retardant on the fire. The smoke began to block any visibility of the surrounding hills, and as night approached I could see individual trees light up as they became engulfed in flames. So I camped in an uncomfortable spot by a log, laying out my sleeping bag.

Not the most comfortable night, waking up to some rodent crawling on me a few times. This is nuts, I’m out of here. Better to do a 90 mile road walk than asphyxiate, I reasoned. After 20 minutes, though, I turned around. I could get to a forest service road, near the fire, and talk to the fire crew. And walk off the trail if need be, shortening the road walk by a day.

A northbounder who’d camped the previous night with the fire crew said everything was fine, so I booked it and got through. Within an hour I could barely even tell there was a fire. Some other hikers, just out for a bit, said the forest service was telling people to evacuate. ¯\_(ツ)_/¯ 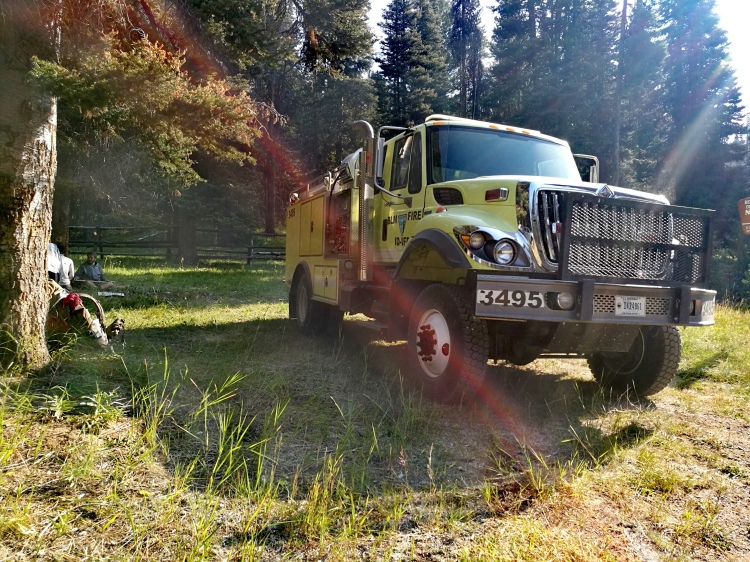 It was hard to get info on the fire because neither state nor national Forest was wanting to claim responsibility, since it was on the border.

Idaho, or at least the border it shares with Montana along the continental divide, is spectacular. Lots of water in some places, though when the divide goes high it can be quite dry. I’d been having an upset stomach, though nothing too bad, and it began to get better every day. That’s why I always carry imodium with me on all my backpacking and foreign trips! Food poisoning in Bolivia at 11k feet is not fun. At all. 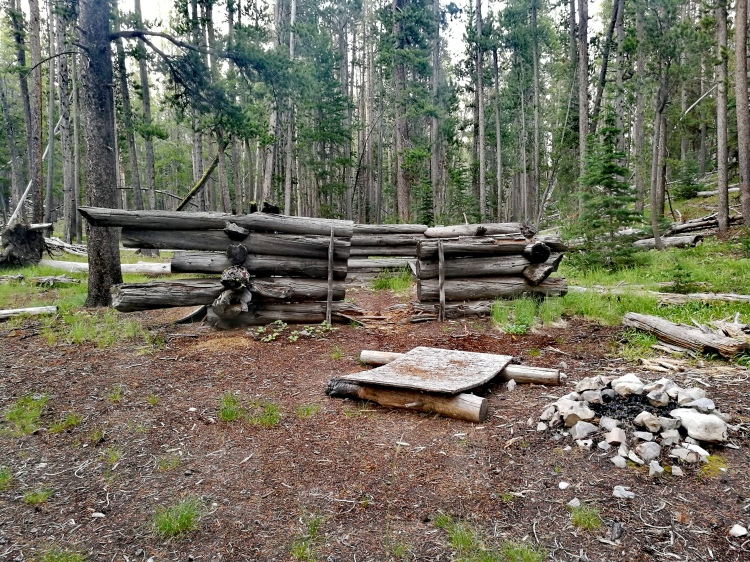 Camping next to the ruins of a cabin was weird, but it was a great campsite. 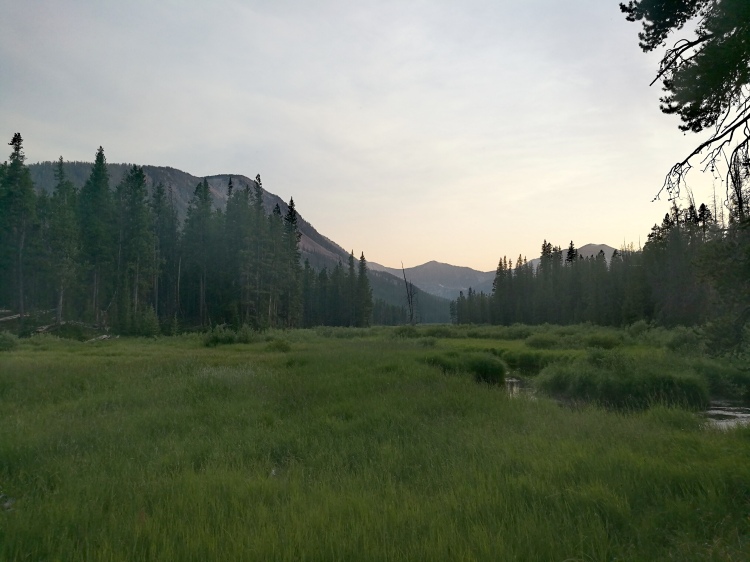 The view from the campsite.

There’s a helicopter above the trail, but it doesn’t seem to notice me. If it does then it doesn’t care, and I make it through without incident. I don’t see a single other person post-fire, which isn’t that strange because there’s hardly anybody on the CDT.

Right after I saw the helicopter. Note the blue skies and lack of smoke. 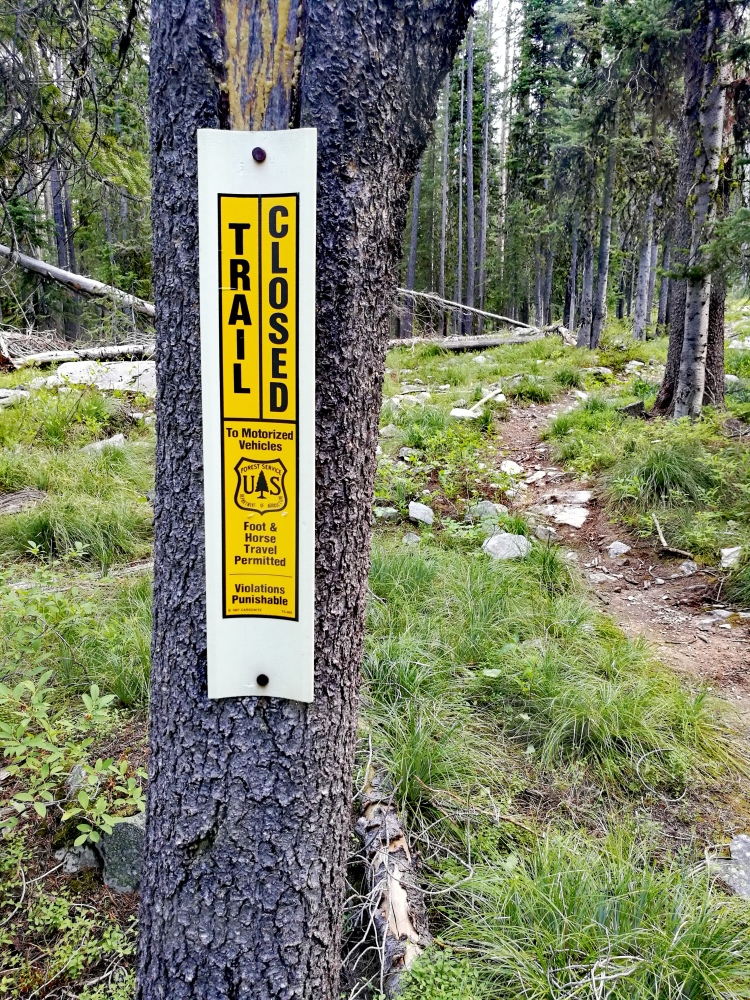 Seeing this gave me a heart attack until I read the fine print.

Descending into the next valley.

The morning after the fire I notice some smoke when I eat breakfast by a stream, but I’m more focused on some GI issues (which end up resolving quickly). An hour later, when the trail crosses a deserted forest service road, I notice a neon orange sign. CDT CLOSED. My heart goes a thousand beats a minute until I realize I’ve just completed the closed section. They closed it while I was on it. And the next section seems open. That means I’m good, right? I plow on, meeting a few people out for the weekend. 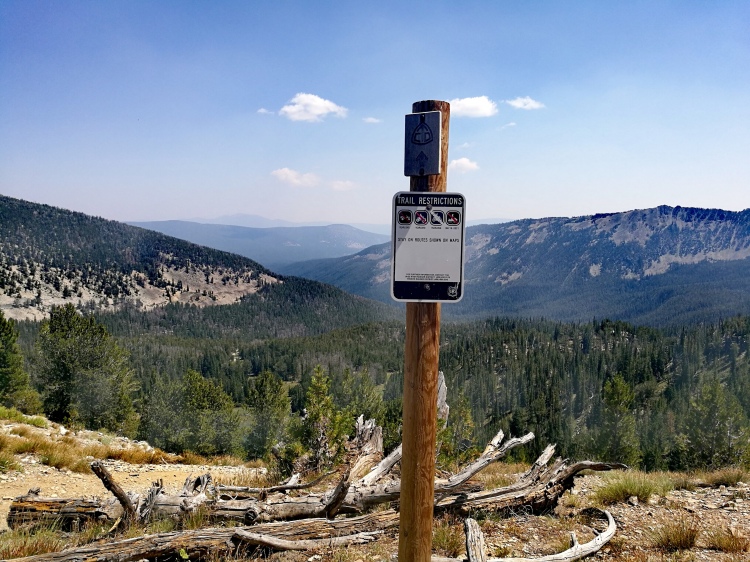 Looking out from the continental divide. 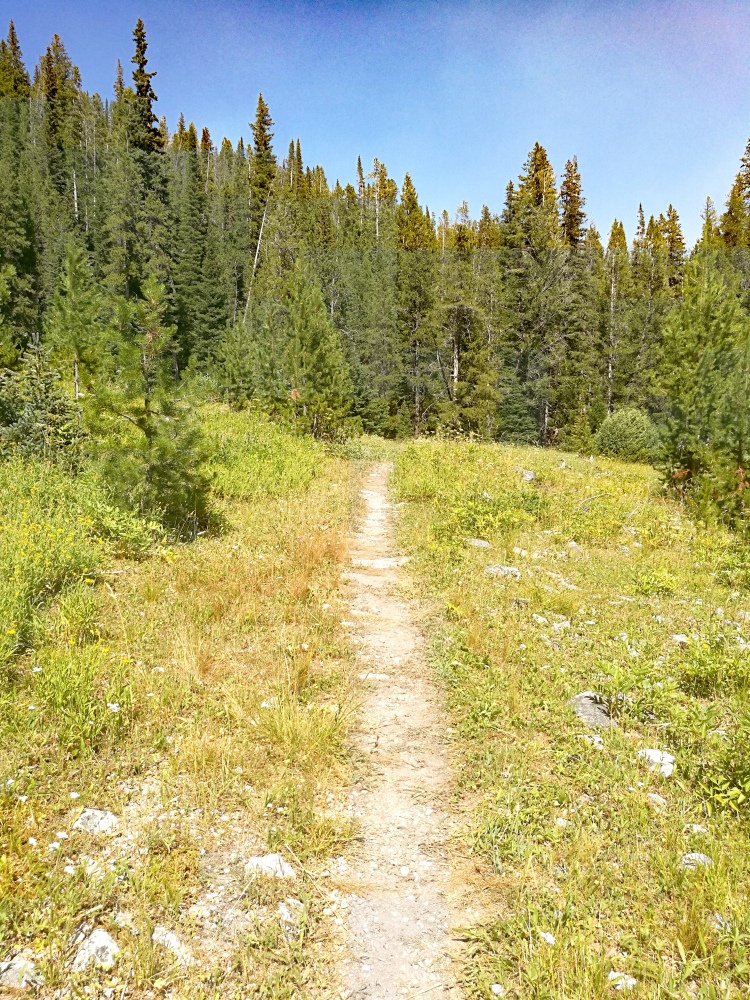 Back in the forest.

There’s a tough 19.5 mile water carry, difficult mainly because it’s the end of the day, I’m tired, my back is sore, the trail is just loose rock that I stumble on every other step, and water is heavy. I can just envision my brother Kevin telling me the same thing he always does whenever I complain about anything: stop being such a whiny little bitch. My brothers are full of such sage advice. 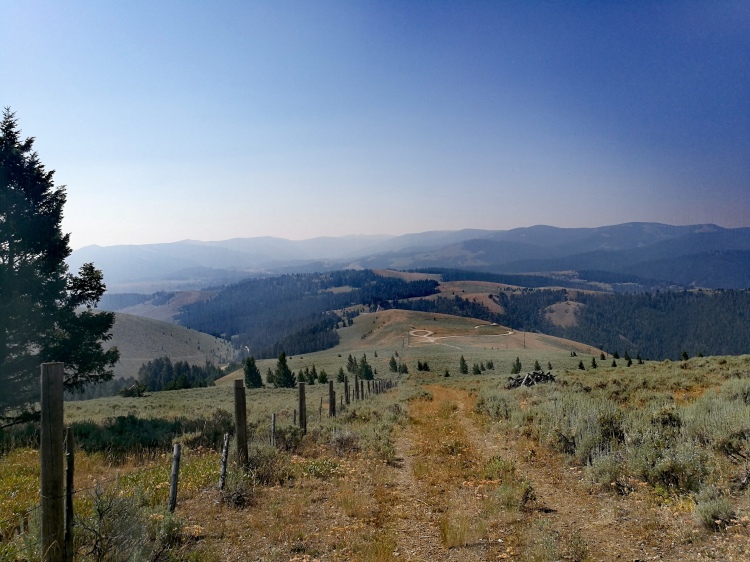 Descending to Lemhi Pass, which Lewis and Clark visited.

Bannock Pass, where Sam from the Leadore Inn met me and gave me a ride to town.

One thought on “Idaho! Plus wildfires”