“It’s so cold!” Murphy calls with a laugh from her tent. I’m usually the first one to wake up and start hiking, but they’ll catch up with me pretty quickly.

Last night we’d crossed the Buffalo River to get to an amazing and spacious campsite. I’d left my socks to dry from the easy crossing on top of my tent.

Will it storm? Who knows. I sure don’t.

“My socks are frozen solid!” I call out, also laughing from how cold it is. Somebody with a thermometer later told me it was 24F/-4C that morning. Going through my pack I realize I’d left one of my liner socks on the other side of the river.

“Totally not worth it,” Murphy agrees when I say I really don’t want to cross the river there and back again to get it. Yay for my father’s Amazon Prime subscription! I’ll just have new socks mailed further down the trail. 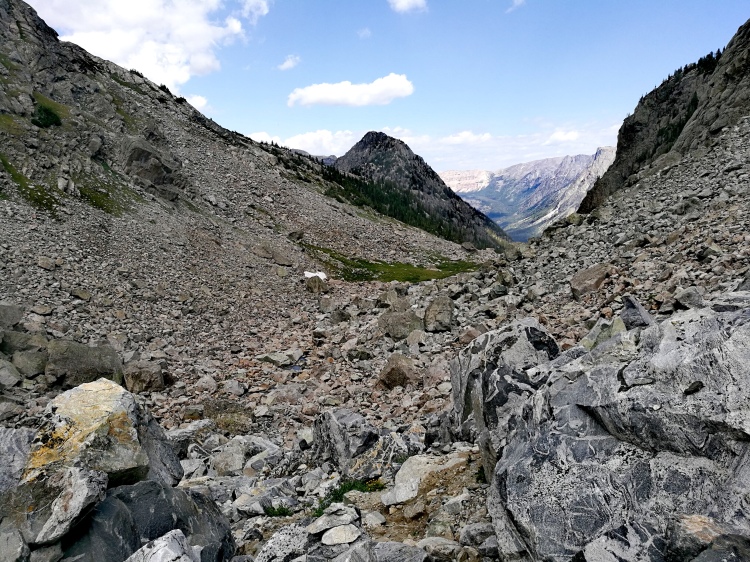 Sometimes you just have to scramble on the trail.

We set off in the Teton Wilderness in the early dawn light, taking off layers as I climb and warm up from the movement. Getting up is always so hard when it’s cold and my 10F/-12C sleeping bag is so toasty, but within a few minutes of walking I’m usually fine. It’s just difficult to get to that point!

There’s only 15 miles/25 km from our campsite to the highway, where we’ll hitch into Dubois, but there’s no rush. There’s no way we’re doing the 37 mile hitch to Dubois before or during the eclipse.

I got some eclipse glasses in Grant Village, Yellowstone National Park. Didn’t want to start off Wyoming by going blind.

There’s a bit of dirt road walking towards the highway before cutting across a field with a barely discernable trail, which abruptly drops me off at US 26. There’s a lot of traffic in both directions and although the cars are going pretty fast, I get picked up by the second car.

Shortly before totality. The stars came out, the birds stopped chirping, and for two minutes it was totally dark. To the north and south we could see light on the horizon. I later heard it dropped 17F/8C degrees during the eclipse.

A Parisian and his boyfriend on a cross-America road trip drop me off in Dubois, and I immediately head to the Episcopalian church to reserve a spot…just to find out that at 3pm I’m the first one of the day. They let hikers and bikers sleep on the floor, which is nice considering the Super 8 Motel is $1000 a night, two night minimum, due to the eclipse.

Dubois has about 1800 people in the summer, and it’s not as packed as I thought it would be post-eclipse. Some woman at the Cowboy Cafe thinks I’m an employee, which sends some northbounders into a fit.

They had tea and popcorn at the Dubois church! I was so in heaven.

“Your shorts cut off mid-thigh, your beard is insane, and there are streaks of dirt all over your face. Of course you’re a waiter here,” a hiker says once the woman has disappeared.

The church is awesome, and Dubois has everything a hiker would need. Some coffee shops are an excellent bonus, and the laundromat has pay showers inside. I ask a cyclist from the church if he wants to split a washing machine since we both have so few clothes, and he looks at me as if I’d asked if he wanted to shower together. The cyclists are weird, and come across like princesses compared to the hikers. Motown, who remembers me from the PCT in Kennedy Meadows (I honestly have no recollection of her), asks if I want to split a dryer with her and her boyfriend.

Hitching inside the city limits of Dubois is illegal, but the point is rendered moot when some weird guy in his 80s asks if I want a ride back up to Togwotee Pass. He keeps offering to take me to random other places along the trail to cut off a day or so, and I have to tell him four times to just drop me off where he said he would. Like I would accept a ride from a stranger onto a dirt road in the middle of nowhere.

I give him $10 for gas (it’s a long drive) and wait until he’s gone before I set off so he doesn’t know which direction I’m going. Never tell strangers the exact route you’re taking, and never tell them where you’re spending the night.

The Winds are pretty spectacular.

There’s a 17 mile detour to Elkhart Trailhead, where you can hitch 15 miles into Pinedale. Everyone loves Pinedale, I’m fairly fast, and there’s no way in hell I’m doing a 180 mile stretch after all the northbounders shared their stories of running out of food.

I saw nobody for hours along this route.

Getting a ride into Pinedale is easy. There’s very little traffic at 9am, but the second car stops and a trio of South Dakotans make room for me. The Episcopalian church in Pinedale lets hikers sleep on the floor and use the kitchen, and there are three other hikers already there when I arrive. 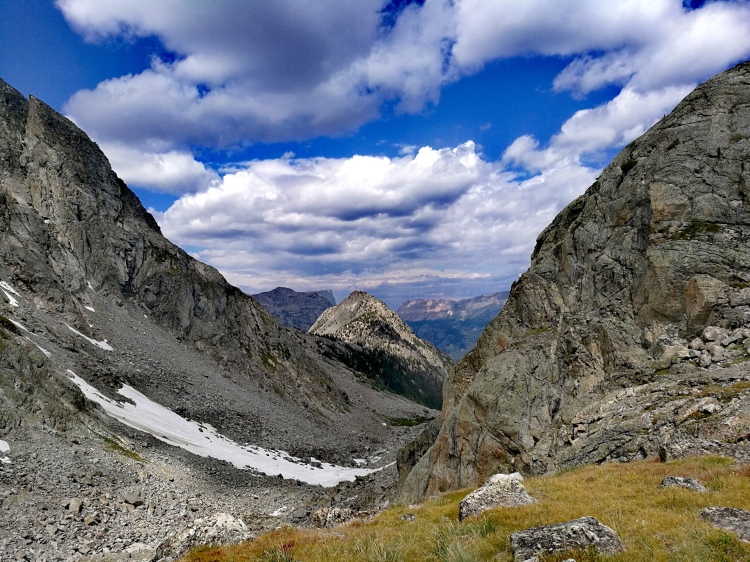 Another shot of the Winds in the Bridger Wilderness.

One is a northbounder, which is strange because there’s no way he can reach Canada before winter. As a southbounder I have to reach New Mexico before the snow starts, but I have many fewer miles and a good deal more time than somebody trying to reach the Great White North. So it’s no surprise when he’s cagey about what he’s actually hiked, and I get the impression he’s just taking advantage of the hospitality of the church. The other two southbounders I haven’t seen before, but they started 12 days before me and took a different route. They also seem to be taking multiple days off in town, which is quite atypical with the tight weather window on a CDT hike. There’s just something off about the others, and it’s further compounded when they stay up late watching TV. I’ve never seen thru hikers be able to stay up past 9pm, also known as hiker midnight. I go upstairs, find a quiet corner, and try to sleep. 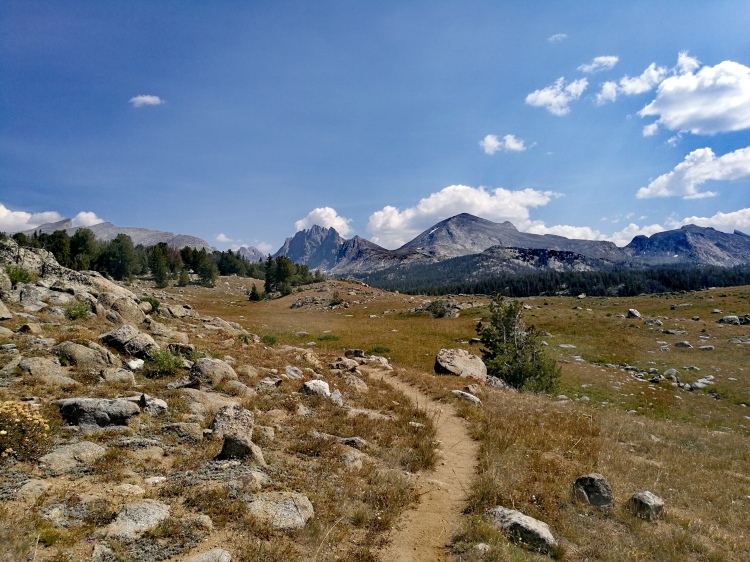 Around the end of the more spectacular parts of the range.

I can’t hear the television, but I still can’t sleep. Having trouble sleeping in towns was a common problem I remember in myself and others on the PCT. It’s just hard to sleep without the cold breeze, and my one night each in Dubois and Pinedale are the first times in over 6 weeks I’ve slept inside. It’s definitely an adjustment.

Near the northern boundary of the Bridger Wilderness at the Green River Lakes Trailhead.

I make a “CDT HIKER TO ELKHART” sign and stand by the side of the road with my thumb out. Within two minutes I’m in the car of a local, not much older than me, who’s on her way to do some hiking. It’s a Sunday morning in August, and it seems like everyone else in the northern Rockies is of a similar mindset.

“Little late for a southbounder, aren’t you?” is a familiar refrain that I hear fairly frequently from old white dudes who apparently have nothing better to do than strongly suggest I’m going to die in the snow in Colorado. This is part of why I avoid humans on trail.

“The others all came through a month ago,” I hear from one hiker. “September is a terrible month to hike in Colorado. The snow was nearly vertical when I was there in July, I normally do 25-30 miles a day and could barely manage 11! Plus, you know what happened to Otter when he went through late season.”

Here’s my response to this bullshit: 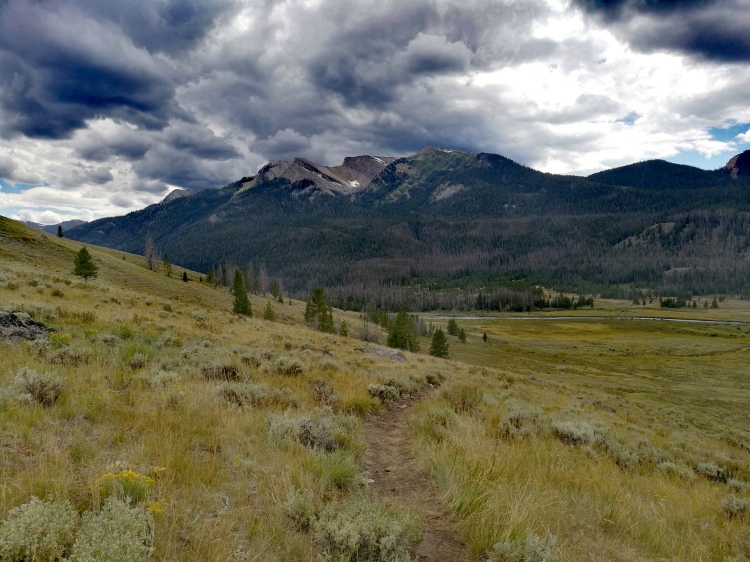 It normally rained lightly in the afternoon.

One guy near a trailhead (I try to just hike fast through these, I hate everyone) asks me where I’m from. “You Ohioans are always coming out here and don’t know what you’re getting yourselves into-” I ignore him and just pet his dog as he goes into the “aren’t you a little late for a southbounder?” tirade. I like his dog but not him, and cut him off to brusquely tell him bye halfway through. Who the hell says that? No wonder your wife left you last year (I’m also not sure how that was relevant to the conversation or how it came up). And how many Ohioans can be coming out here in the middle of nowhere in the least populated state in the country?

My maps said the detour to Pinedale wasn’t very scenic, but I have to disagree.

Although the Winds were visually stunning, I was glad to get out and enter the rolling, dry desert prairie of the Great Basin. Maybe I’m becoming too much of a misanthrope, but on the PCT I got to the point where I just avoided anyone who wasn’t a thru hiker. And I think that’s happening again on the CDT. 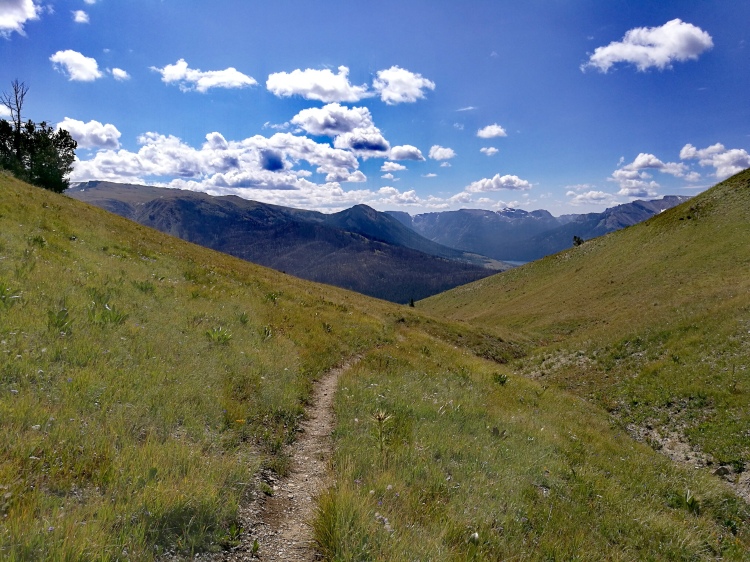 The start of the Bridger Wilderness is at the lakes.

One thought on “Eclipse in the Winds”