“I don’t know how you guys handle being out in that,” the owner of the Salida hostel tells me as I register my stay. After studying the weather forecast I’ve opted to wait out some thundersnow (didn’t know that existed, thanks Colorado) and get back on trail in a few days. This state is no joke in October, and I’d like to make it through without frostbite or hypothermia.

There was a bit of snow on the trail heading into Salida.

There are four other SOBOs at the hostel, including two fresh faces. Slomo and Backtrack started from Canada two and a half weeks before me, which is why I haven’t met them until now. All of us are in our twenties, bearded, and sharing horror stories about dealing with the recent snowfall.

Some really high dude walks into the kitchen, puts a pizza in the oven, and tells the others about a basic three-walled mud hut further south on the trail.

Gotta have my morning coffee.

“Let’s ride out the storm there!” Pounds excitedly cries.

That guy who told you about this is obviously stoned and just put a pizza in the oven, which he left and we had to remove to prevent a fire. And you’re putting your safety in faith in him? I declined to join this, hanging out in warm, dry coffee shops instead.

South of Salida in the Sawatch Range, with a thunderstorm brewing in the distance. It came fast, but I was able to take shelter in a random mud hut with some mountain bikers. It passed within 15 minutes.

A local trail angel gives me a ride back up to the trail at 7am on my last day in town, and I’m so ready to get out of the hostel. Some others had blasted 80s music until midnight and I’m barely functioning in a sleep deprived state.

“What makes you qualified to do this hike? It’s so high up here, way different from Ohio,” he says on the way up.

Mentally rolling my eyes, I mention that I have 6000 miles of backcountry experience in the past two and a half years. And that a few months ago I was hiking at over 17k feet in the Andes, on trails where hikers had been murdered by the Shining Path. And that-

“Okay, you’ve definitely been out there some,” he interjects, acting a little self conscious when I go on about how Colorado isn’t really that high.

You opened this can of worms! I’m an asshole, so I talk about how easy the terrain is in Colorado compared to the High Sierra of California on the PCT.

On the Great Divide bike path, which winds from Canada all the way down to Mexico. It’s really popular with Europeans and Australians, and intersects the CDT from time to time. It’s often used as a means of bypassing the San Juans and their snow.

“I mean, Colorado ain’t got nothing on California,” I add, knowing he probably loves being compared to them. But I don’t care, at this point I’m so tired of people trying to belittle me and my backcountry experiences. Locals can’t seem to comprehend that just because I was born in flat, low Ohio doesn’t mean this is my first time leaving it.

“Drop me off here, if you don’t mind,” I politely request, pointing out a random spot of earth on the highway.

“I can take you further up, cut off some, uh…,” he cuts off at the look on my face. I’m walking from Canada to Mexico, and not missing a step in between. I’m starting this section from the exact spot I got off.

Getting back on trail after an extended time in town is always a liberating, semi-spiritual experience. I don’t care about anything else out there. The only things that matter are food, water, navigation, and staying warm. The weather looks survivable for this next stretch, and I’m going to get out of Colorado without skipping if at all possible.

I’m not sure what water sources are reliable, so I tank up with a little over a gallon and fill up when I see streams. It’s heavy, but better of dying of thirst in a remote stretch of southern Colorado. 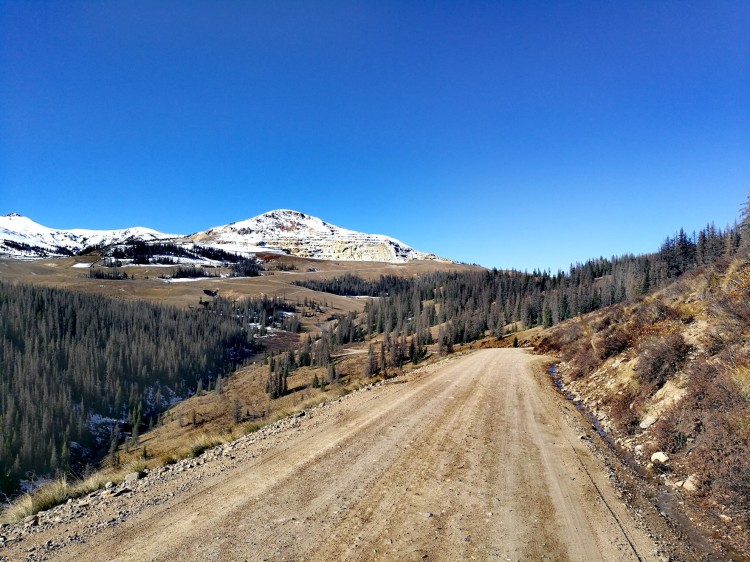 The snow line keeps getting lower and lower.

There’s some traffic on the roads, although I often go hours without seeing a car. My first night I camp on private land, not sure when I get back to the national forest, but the owners drive by and seem not to care.

“Stomper and I are at the hostel in Del Norte!” Murphy texts me as I’m walking across a vast, open field. I met both of them near the Canadian border, and hiked hundreds of miles with Murphy. I’m excited to see them!

The village lights are visible in the distance. The moon is bright and almost full in the darkening sky, perfect for some night hiking. Until a bolt of lightning streaks across the sky.

“I might arrive a bit later than expected, gonna seek shelter in the trees a quarter mile back,” I text back before darting away.

I get up early and follow the dirt road to the highway, where it unceremoniously dumps me into traffic. When cars come by I dart off to the side, this road walk lacking a shoulder for decent walking. But in an hour and a half I’m crossing the Rio Grande (yes, THAT one I later find out) and am chatting with Murphy and Stomper. I haven’t seen Stomper since northern Montana, and parted ways with Murphy shortly after the eclipse in late August.

“I had such a great time in Nova Scotia. America is so beautiful,” the hostel owner says.

“Nova Scotia is actually a province of Canada,” I blurt without thinking. Cash is in my hand and I want to pay, but after this he studiously ignores me and just goes on about American Nova Scotia. I just want to go get some food!

“Nova Scotia is actually a province of Canada,” I blurt without thinking. Cash is in my hand and I want to pay, but after this he studiously ignores me and just goes on about American Nova Scotia. I just want to go get some food! I ditched my stove in northern Montana, and after this 120 mile stretch from Salida I just want a hot meal ASAP.

I heeded the warnings not to drink the water for the next 20 miles.

Murphy seems to see I’m about to do something ill advised and gets the owner to register us, and the two of us plus Stomper go down the street to get some Mexican food. The Mexican restaurants have been getting better and better as we get closer to the southern border, and I’ve heard in New Mexico (soon!!!) they’re phenomenal. New Mexico is so close… Just got to get out of the Colorado plateau and low into the warm-ish, dry desert.

An older hiker, a physician named Surprise (apparently he didn’t tell his wife he was going to hike the CDT until she found his maps hidden under the couch), arrives that night and promptly tells me he hiked the PCT in 2012, “the last good year.”

“It’s a shame you hiked it after Wild ruined everything,” he added. This really bristled me because, having read Cheryl Strayed’s admittedly decent book, it actually has very little to do with the PCT and much more with grieving for her mother. And the data, logic, and trends all point to Wild really not making the PCT popular, an adjective I don’t find apt since I usually saw only three other humans a day on my 4.5 month thru hike in 2015.

“Wow, you’re the only person I’ve ever heard argue with him,” Murphy later told me. The hostel was very small, just one room plus a bathroom, and the owner introduced himself to me multiple times but overall was quite nice. Even if they did have six boxes of laxative tea.

Autumn really is quite beautiful in Colorado.

It’s another few days to Chama, just over the border in New Mexico, and even on the current “low” route (10-12.5k feet) bypassing the San Juans it’s fairly cold at night.

We’re on the highway for a while out of Del Norte, but I just listen to podcasts and try not to get blown over in the heavy winds as trucks pass me.

“You okay on water?” a local stops and asks every so often.

I’d wanted to camp with the others that first night out of Del Norte on the deserted dirt road to New Mexico, but it’s getting dark. The trail is climbing and I’m cold. I find a spot 70 yards off the road, out of sight, and set up my tent just as darkness falls.

The next morning, after a surprisingly warm night in five layers, a ten degree down bag, and sleeping bag liner, I’m on the trail by seven. And four minutes later I pass three tents, which belong to the others from Del Norte.

Passing by their tents in the morning.

“GOOD MORNING!” I shout, walking between the tents. There’s no reply, not even a rustle. Oh shit, maybe they’re all dead and I’m gonna be the primary witness.

It’s cold, so I keep moving and head off to 12.5k feet on my way south. The last few miles of Colorado are here! I’m so ready to be done with this state.