When I wake up the next morning, I unzip my tent to find Surprise staring daggers at me. When I lose his attention, he switches his stare to look lovingly at Murphy. The other three cowboy camped last night, but with the creepy old doctor staring murder at me coupled with all the tarantulas in the desert I thought it best to just sleep in my tent. With my box cutter next to me.

Deciding to GTFO, I quickly pack up my things and leave. It’s cold, and I’m wearing all my layers hoping to just book it to town. Last night I mentioned to Murphy and Stomper that I was running low on food, having planned on doing more miles each day than our current pace. They gifted me a bag of jalapeno cheddar pretzels and an oatmeal bar, but my food bag was still too light. Time to get to Grants. 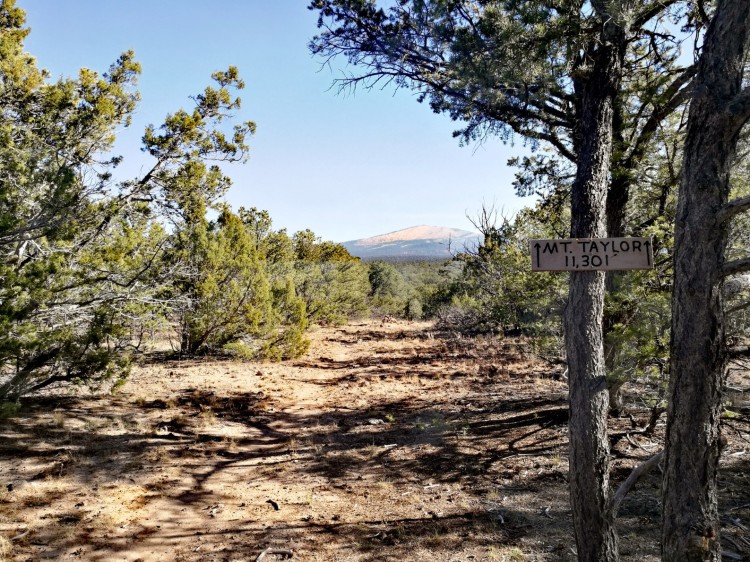 Looking back on the trail towards Mt. Taylor. I’m not really sure how you could get lost heading there, considering it’s a pretty obvious mountain (maybe not in the lighting when I took this photo), but Surprise somehow managed not to make it.

The CDT crosses Interstate 40 at Grants, just west of Albuquerque. There’s a steep drop before joining a highway to town, and ibuprofen is the only thing getting my knees down there and making a beeline to get a pizza.

Men are trash, a grandmother I hiked with earlier on the CDT texts me when I tell her about all the crazy drama with Surprise. Not you and Stomper, of course. Just most men.

Murphy texts me when it’s safe to head to our motel without a surprise from Surprise.

He said he’s going to head to Albuquerque and catch a flight home to work things out with his wife, she wrote to me on her phone. Surprise had been following her constantly, so we couldn’t talk without him overhearing her side of it. If he just leaves we can avoid a lot of drama.

There was a road walk by a prison into the interstate town of Grants.

“They had a three bed room!” Stomper says excitedly when I knock on the door to room 12. I drop off my pack in the corner, claim the bed closest to the heater, and get caught up to date.

“We told him the three of us were going to split a room, and that he was to be by himself,” Murphy said. “He said that was fine, and that he wanted a goodbye dinner.” They’d gone next door to a local New Mexico burger chain and had a meal while I ate an entire large pizza, sitting on the sidewalk outside the Pizza Hut and looking thoroughly homeless.

Murphy’s phone buzzes, and she lets out a groan of frustration when she reads the message. “Apparently that wasn’t our goodbye dinner.”

I’m not Surprise’s favorite by any means, and thus thankfully unwelcome at his goodbye dinner. Murphy and Stomper reason that if they never have to see him again it’s worth it, and they pass an awkward hour at a Mexican restaurant while Surprise mainly ignores Stomper to focus on Murphy, his unrequited darling. I enjoy my first shower in days, and feel like I definitely got the better outcome.

Miss you guys already! Surprise texts Murphy the next morning. We just get busy doing our town chores, and since Grants is so spread out it’ll take most of the day to do laundry, buy food, and head to the post office.

Satisfied my pumpkin spice latte addiction at McDonald’s, where some random guy argued with me about what towns the CDT visits and where the trail goes. Most people assume I have no idea what I’m doing.

Throughout this time Surprise keeps texting Murphy about how I’m an immature asshole (to be fair, he said I was a “hassle without the h”), and that I have no respect for my elders. This seems to upset Murphy much more than me, and I wear his assessments of me like a badge of pride. He then rants about how he’s making so many sacrifices by hiking on without us so as not to cause drama. Apparently his plan to go back to North Carolina and repair things with his life didn’t last long.

Stomper, Murphy, and I stand by the side of the highway with our thumbs out, really not wanting to walk the mile and a half to the post office. Within minutes a woman pulls over, telling us to pile on in.

“I run the bus system in Grants. No buses today, but hikers are always welcome when they’re running!” she tells us.

On this trail more than most, we have to mail ourselves packages of food and order various pieces of gear from online. Some of the towns we pass through don’t have any grocery stores, such as the upcoming Pie Town (I’m really interested in finding out what a place like Pie Town is like). The CDT Handbook, published by a woman named Yogi, has all the addresses of where we have to mail our things. These places are used to hikers and, in my experience, it’s almost always gone smoothly.

“Oh, hey there!” Surprise calls to me a few minutes after we enter the post office.

“Uh, hi,” I say, trying to act busy with arranging my maps into various envelopes to mail off to later towns.

“I’ve been really enjoying my solitude,” he cheerily tells me in direct contradiction to the texts he’s constantly sending Murphy, whining to her about how lonely he is.

“That’s nice,” I respond, heading off to find Murphy. She’s waiting in line to mail a package.

“He’s here,” I whisper to her, watching him read our ETAs on our supply packages. Probably so he can know when we’ll be in each town and can duly stalk us some more.

“I know, I’m just pretending not to,” she replies.

My aunt sent me a box of cookies to general delivery at Grants, and I used taking this photo as an excuse to not have to deal with Surprise.

The walk back to the motel passes in a 20 minute awkward silence. I’m walking side by side with Murphy so Surprise can’t prey on her as easily. I turn back and involuntarily scream, not realizing he was so close behind us and almost literally breathing down her neck.

At the motel Stomper goes off to buy a cherry coke while I search through my pack for our room key.

“He’s coming!” Murphy says. Surprise is indeed making his way over to us after having left to, we naively though, go back to his own room and leave us be. I’m tossing all my clothes and bags of food onto the sidewalk in front of our room.

“I’m looking for it!” I finally find the key and open the door. Murphy zooms in and I pick up my items wholesale, throwing them into the room.

“I got you guys some presents!” Surprise says. “I don’t know you well enough to get you anything, though. I hope you don’t mind.”

“Nah, it’s cool,” I say quickly as I slam and lock the door in his face.

“The candy is right here,” he says through the door.

Let me know when you guys order pizza so I can get in on it, Surprise texts Murphy. He’d overheard our dinner plans. Turns out the goodbye dinner, and his promises to hike on without us and give us some space, didn’t really mean anything.

So we have Stomper go over to Surprise’s room and tell him to fuck off. He returns 45 minutes later, saying Surprise is obsessed with his hatred of me and that he finally gets the message.

We opt to take a second day in town to recover from the previous day’s drama, and to give Surprise time to head off. We purposefully never told him when we were leaving Grants. 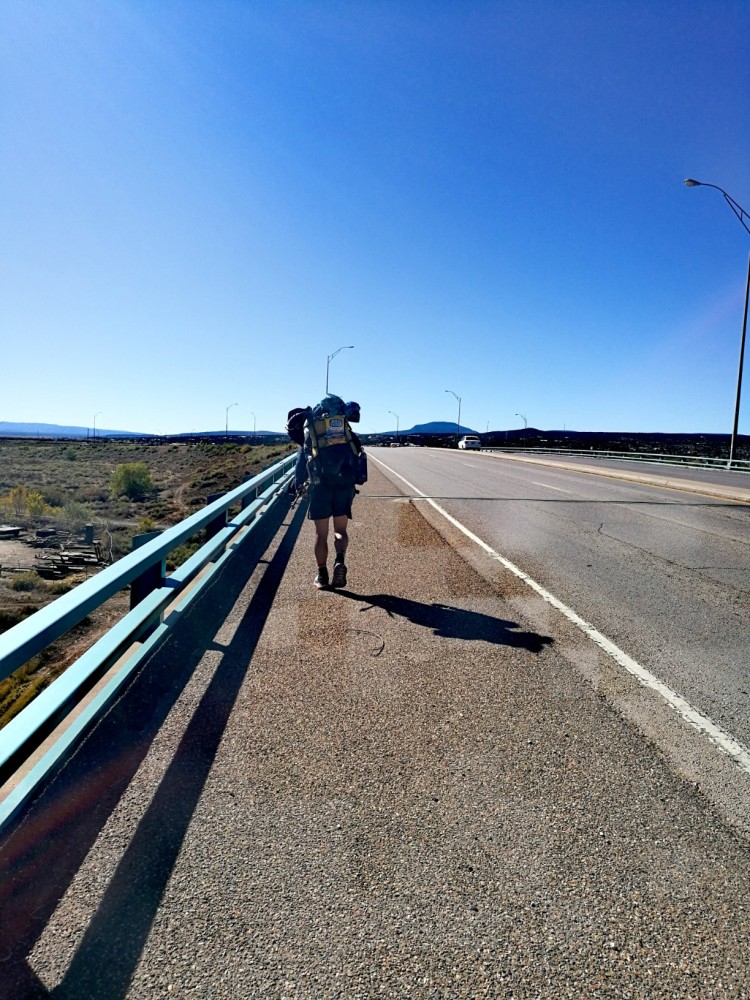 “Surprise woke us up this morning knocking on our door asking when we were going to head out,” another CDT hiker tells us. Surprise can’t seem to function unless he’s following someone, but we’re just glad it’s not us for the time being. 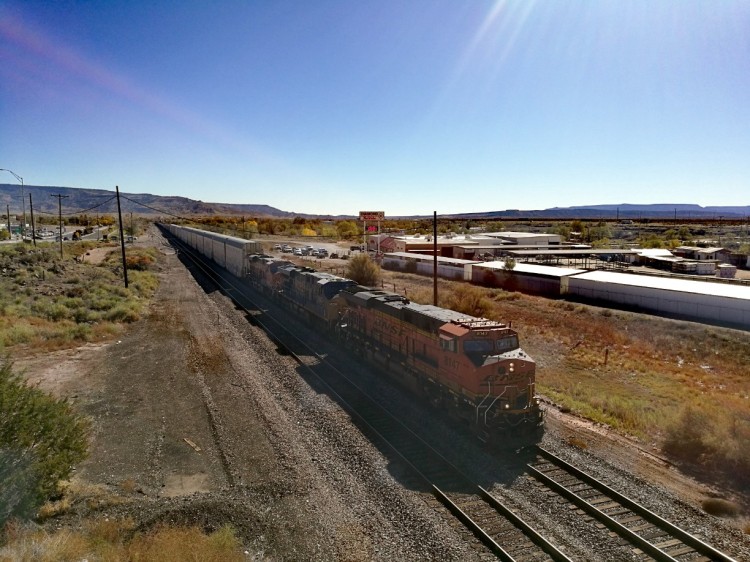 There was a train going under the bridge while we crossed.

Spent a couple days in the Malpais National Monument, crossing lava fields with crevasses. We kept thinking we’d find Surprise waiting for us behind every corner, but we never saw him.

Had a bit of a highway walk after the Malpais. 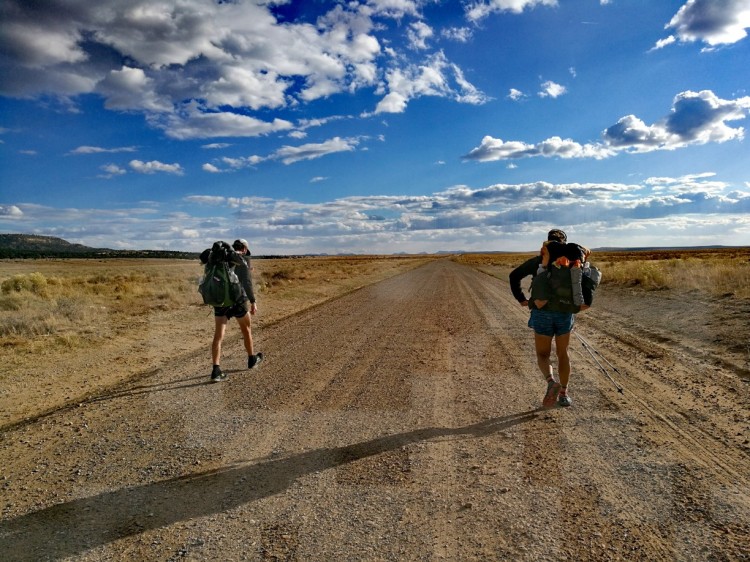 Dingo and Murphy heading off on a dirt road towards Pie Town in the afternoon. We ran into Dingo, Baby, and the latter’s dog Luna on the road walk. The six of us camped a little over a day’s walk out of Pie Town in a farmer’s field to the left of the road. No cars came by to bother us.

Dinner break by the road.

Nighttime photo of Murphy and me laying out our sleeping bags under a tree in the forest. There were tons of NO TRESPASSING signs so we found a section of woods that wasn’t fenced off, walked off into it, and decided to not set up our tents so as to make it harder to see us. There were mountain lions in the area, and I agreed to cowboy camp only if we were all uncomfortably close together. Murphy and Stomper were fine with that. Dingo, Baby, and Luna kept on hiking to make it to Pie Town that night.

The Thomases are a couple in their 90s north of Pie Town who let hikers use the spigot in their front yard, and also welcome us to camp on their property. They provide an important water source on a dry section, and are super friendly. We spent a couple hours in their house chatting with them. I think they’re pretty lonely and enjoy hosting hikers.

Took a selfie with a dead coyote on the way into Pie Town.

L to R: Baby, Dingo, me, Stomper, and Murphy enjoying pie at the Pie-O-Neer Cafe in Pie Town. They only serve pie. Pie Town was an interesting place. No grocery store, so you have to mail yourself a box of food to the post office (which is open until noon). I’d heard the guy who runs the post office was unstable and habitually threatened people, but he was friendly to us.