Maybe my tolerance for the bizarre has some serious calibration issues, but after a month my life in the People’s Republic of China seems pretty routine. And I really like it here. 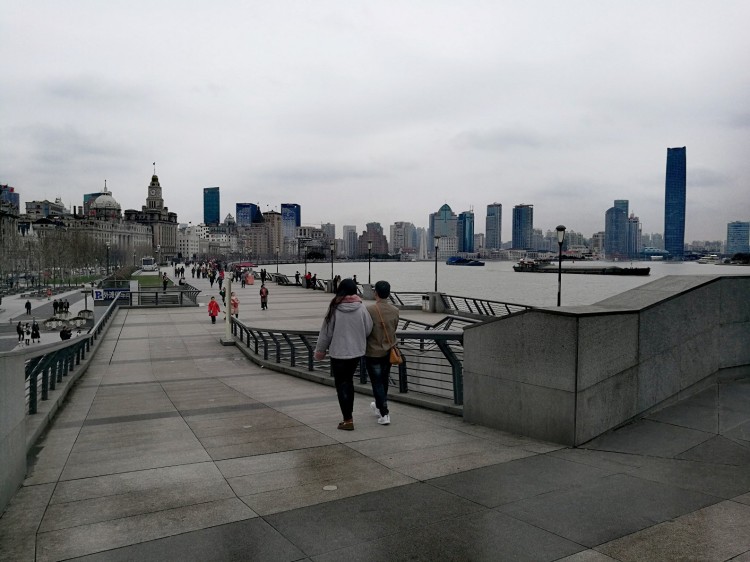 Walking along the Bund in downtown Shanghai.

The 15 hour flight from Chicago to Shanghai wasn’t nearly as bad as I’d dreaded. Having stocked my Kindle with plenty of books to keep me occupied, including the newly published Lonely Planet Guide to China, saved my sanity (though I did start to kind of lose it after the 10 hour mark).

Chinese immigration procedures were straightforward and painless, leaving me with my checked suitcase at the Shanghai Pudong Airport train station about 40 minutes after disembarking from the plane. The maglev from the airport to downtown is the fastest commercial train in the world at 270mph (high speed trains generally go about 185mph) and dropped me off at a Shanghai metro station, which I used to travel to my Airbnb.

Downtown Hangzhou. I live in a quiet suburb about a 40 minute subway ride from where I took this photo.

The subways in Shanghai and Hangzhou, my current home, aren’t as crowded or chaotic at rush hour as the equivalent peak times on the Metro de Madrid. Aggressively jostling each day for space on trains and buses operated by the Consorcio Regional de Transportes de Madrid prepared me well for navigating Chinese public transit systems, which are ultra modern and efficient. 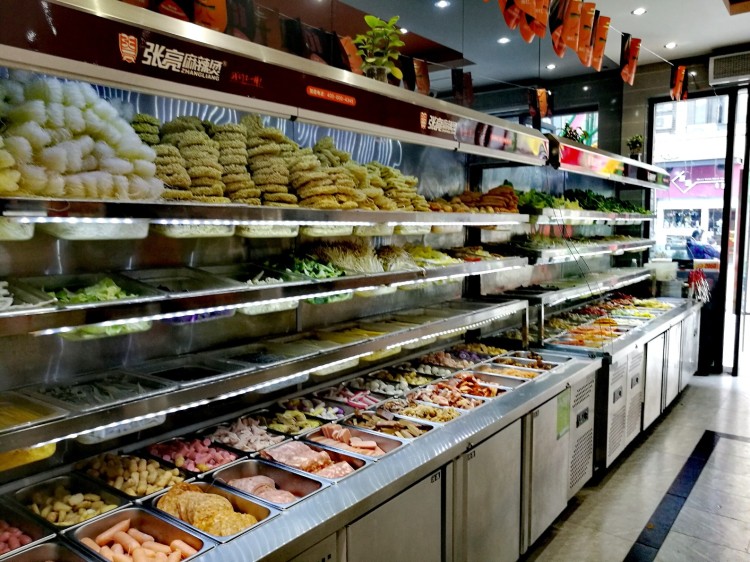 There are a lot of restaurants where you just pick from a wide variety of noodles, meats, and vegetables and the cooks turn it into a soup. Or, at some Sichuanese restaurants, you can add insane amounts of spice so that your tear ducts get cleared out. I have a pretty high tolerance for spicy food, but at Sichuanese restaurants it can be a little rough.

Crispy roast duck, soy rice, cooked bok choy, eggs, tomatoes, and soup. This is from a super popular hole in the wall place across the street from my university, and the not-too-approachable middle aged woman who runs it serves the best food I’ve had in China. Like in most restaurants in China, meals run from $1.50 to $3. Cooking for one’s self isn’t as common in China as in other places.

I gave myself a full day in Shanghai to get adjusted to China and the new time zone, literally on the other side of the world from Ohio, as well as print my train ticket at the station. My job is in Hangzhou, an hour’s bullet train ride from Shanghai Hongqiao, the largest train station in Asia. The building is almost incomprehensibly massive. There’s a train leaving about every 45 seconds with 14,000 passengers boarding or disembarking every hour.

There must be thousands of different passport photos of me in various Chinese government records by this point. Every little part of applying for my residency permit, which will let me enter and leave China without a visa, requires a passport sized photo.

Getting from Shanghai to Hangzhou is pretty easy, a $12 train ticket with departures every five minutes, but in China you can only print your ticket at the station. This took about 30 seconds, I just told the attendant in Mandarin what I wanted and gave her my ticket number with passport. I’d previously bought the ticket online before leaving the US.

At Hangzhou East Station the university had a man with my name on a piece of paper waiting for me. It wasn’t hard to pick me out of the crowd, and the man drove me to my highrise in the suburb of Xiasha. I checked into my apartment, a comparatively spacious studio with shared kitchen and washing machines down the hall, and walked down the street to get a Chinese phone plan.

An interesting ad for donkey meat sandwiches I saw recently. Some of the English translations are pretty bizarre around here.

“Don’t pay attention to those prices, nobody actually pays that,” the attendant at the store told me when she caught me reading the list of prices for phone service. “It’s 18 yuan (~$3) a month for 6GB of data for use inside the province, and then $1.50 for 500MB if you leave to go to Shanghai or some other province.”

“I don’t know my address,” I told her during the registration process.

“No problem, I’ll give you one,” she replied. And within 10 minutes I’d loaded money onto my account and was connected to the China Unicom network. 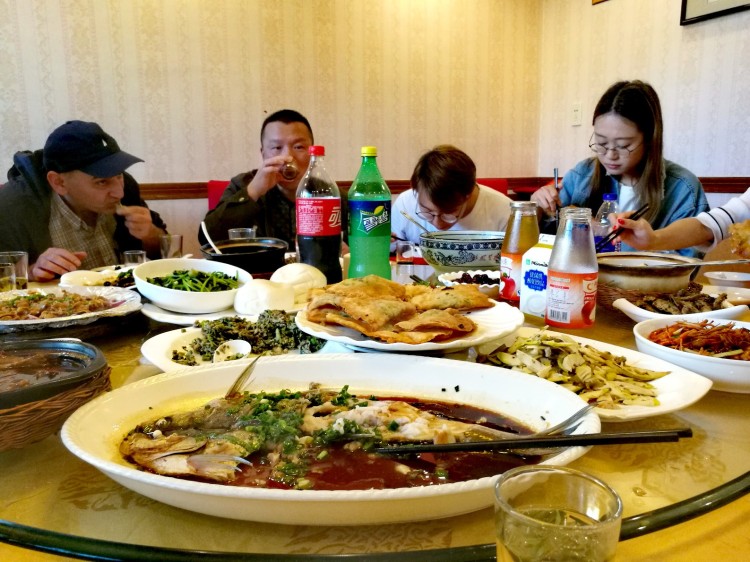 Eating lunch on a school trip.

A professor from the College of International Studies picked me up to show me around and help me set up an account at the Construction Bank of China, a national bank with ATMs all over the country.

I teach five English conversation classes that are 90 minutes each, and so far I’ve been pleasantly surprised at my students’ English ability. They’re around 20 years old, all freshmen or sophomores, and some have near-native levels of fluency. 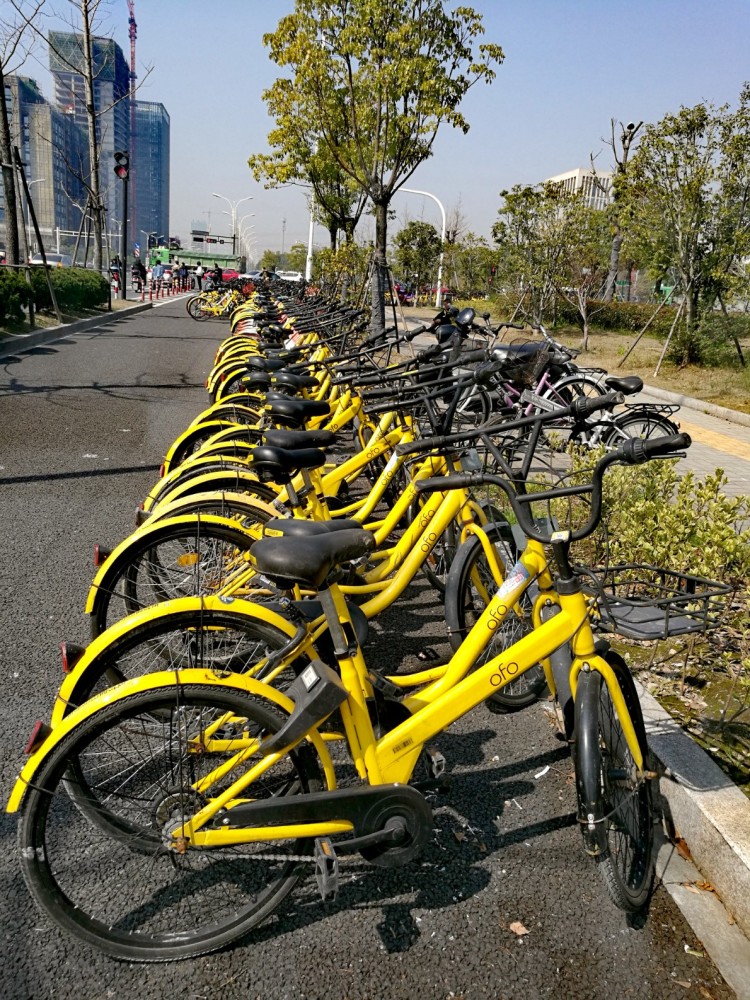 There’s a great bike share program in Hangzhou. You scan a code on the bike using your phone, which unlocks the bike. You can pick up and drop off the bikes almost anywhere, and it’s about 16 cents a ride.

My first week I made all the students give a four minute introduction in English, which I’d interrupt with follow up questions to gauge their English level and better help me plan the class. Most of the intros were predictably banal, though there were some notable exceptions. One went on a long diatribe on a Japanese mystery novel she read over break about a police officer who rapes his son’s girlfriend and then is tasked with protecting her from the mob in some kind of witness protection program. I just stared dumbfounded that she’d go into such graphic detail about this on the first day of class. Admittedly, I did have to tell the students that the oft repeated phrase “Over winter break I enjoyed a decadent lifestyle” is not something one would typically hear in English.

I saw this woman on the Hangzhou subway. I liked that the pentagrams had little colored pom poms on them.

One student stayed after class to tell me I had the facial bone structure of a movie star and that she thought I was beautiful. The list of movie stars I’ve been told I resemble is growing increasingly long and bizarre, though locals have admitted to me they have trouble distinguishing between white people. The most common one I’ve got so far is “that guy from 50 Shades of Gray,” which I’m convinced is because apparently the lead actor has a beard. Chinese people don’t have beards, and I’ve been asked a few times if it’s sharp enough to cut skin. I’d be surprised if that movie survived the censors, though I admittedly know very little about it.

Soy braised beef noodle soup from a Hui restaurant by my apartment. The Hui are a Muslim minority, and this is one of my favorite restaurants in Hangzhou. 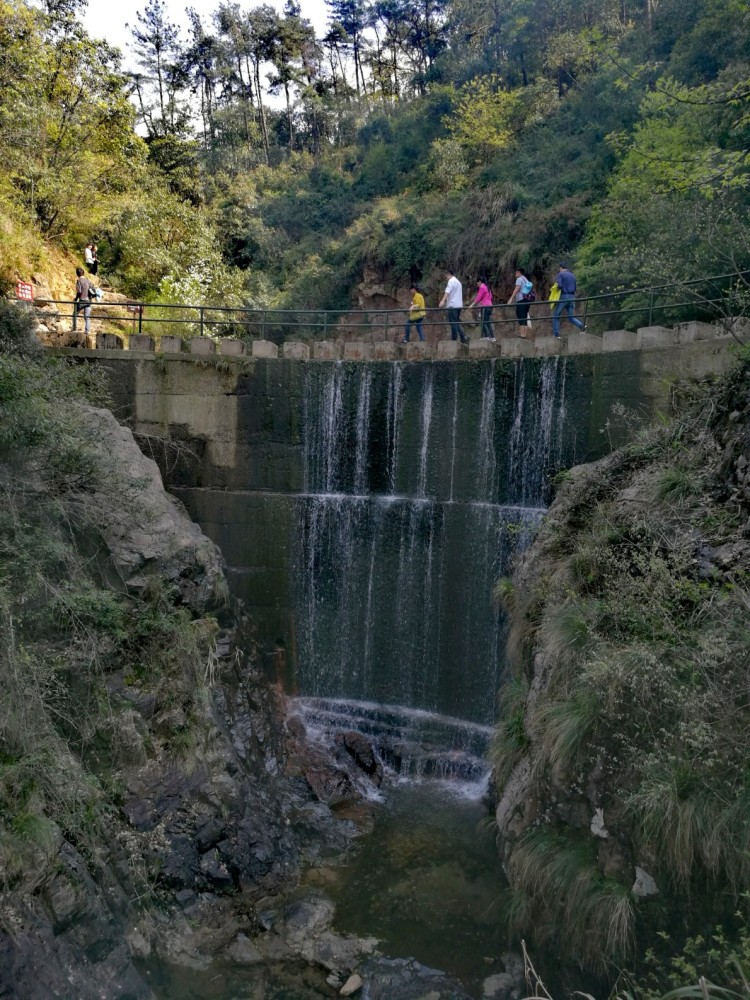 Went on a hiking trip to a national forest in Zhejiang province (my province) with the International Studies Department.

Being behind the Great Firewall of China has its advantages. It’s kind of nice not hearing about the news each day, which is tightly controlled and determined beforehand by the Party. Politics and 20th century history is something that’s never talked about, but there are some pretty creative ways of talking about something without actually mentioning it.

Also went on a boat ride on that aforementioned trip.

One thought on “One Month in the People’s Republic”