I’m still not really sure what Chinese people actually do for the Tomb Sweeping Festival. Presumably at least some go sweep the tombs of the deceased, but so few Chinese actually live in their 家乡/jiaxiang (ancestral home) anymore. 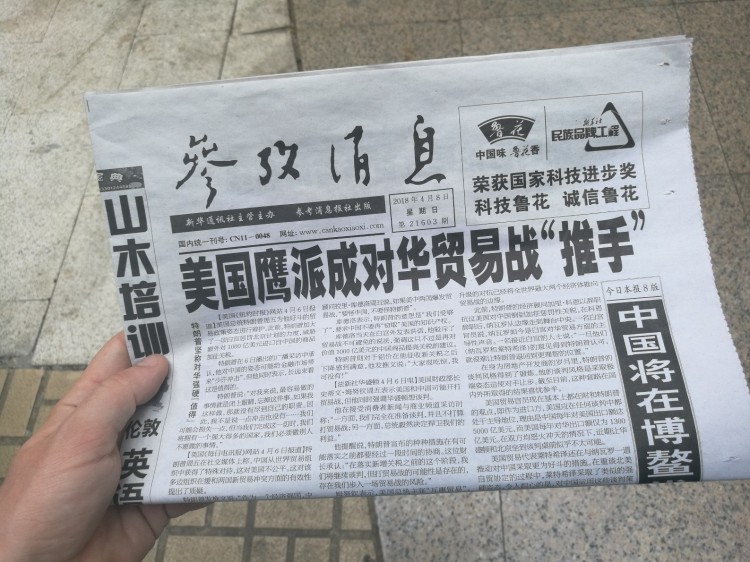 A newspaper headline detailing the tariff war with America.

It was completely my fault that I only belatedly discovered I’d have four and a half days off work for the holiday weekend. I’d misread the emails from the English Department, erroneously thinking I’d have to make up classes on the Sunday immediately after Thursday’s national holiday. It wasn’t until the Foreign Studies Department field trip I attended a few days prior that I heard from colleagues the Sunday makeup day was for Friday’s classes, not Thursday’s…and I don’t have classes on Friday = Connor can travel!

My Airbnb host and me eating legit dim sum in Guangzhou. I’d mentioned that I really wanted to go try it, and he and his girlfriend were trying to decide what to do for lunch so we just went together. It was awesome, probably one of the coolest dining experiences I’ve had.

Finding train tickets last minute for a Chinese long weekend is not an experience I’d recommend to others. Most everything was unavailable, and my original plan to spend a few days on the island city of Xiamen (formerly the British colony of Amoy) in the southeastern Fujian province consistently ended in “ALL TICKETS SOLD OUT” error messages. Tickets to Hubei province to see the Three Gorges Dam were gone. Sichuan province, home of spicy food, wasn’t going to work out either. But finally…I scored a bed on one of the numerous daily departures from Shanghai to Guangzhou, conveniently stopping in my Hangzhou along the way.

For dim sum you mark out what you want to order off a big paper menu, though in some places you just pick things off carts doing rounds through the restaurant. I told the Airbnb host’s girlfriend that I’d be willing to eat anything. “That’s a dangerous thing to say in Guangzhou!” she replied. There’s a saying that the Cantonese will eat anything with four legs that’s not a table, anything that flies that’s not an airplane, and anything that swims that’s not a submarine.

Guangzhou has a reputation for being a gritty, industrial (read:polluted beyond belief) city in the far south between Hong Kong and Vietnam. It’s not typically on a tourist’s itinerary, but I was desperate not to spend the holiday weekend staring at the walls of my apartment.

Trying fried chicken feet, with bones and everything still inside.

The Chinese use their phones for absolutely everything imaginable, plus more. The popular messaging app WeChat also doubles as a sales point for the Middle Kingdom’s vast rail network. The one caveat of Chinese train travel is that tickets must be printed in person at the station, which entails queues of anywhere from 30 seconds to 30 minutes. I was lucky in that I’d remembered to bring a book and only had to wait for about 15 minutes. An older man behind me with his friend would verbally attack in a thick unidentifiable accent any and all who dared try to cut in line. 每一样，每一样，都需要排队买票阿！Everyone is equal, line up for your ticket just like everyone else!

Another dim sum photo. One of the big reasons I came to Guangzhou was to eat tons of delicious food. It was a success.

My passport is at the police station being processed for my residence permit, but I’d been given temporary ID papers and travel authorization which got me my tickets without problem. Chinese train stations in major cities are sterile, incomprehensibly massive feats of engineering that lack the charm and character of Europe’s old rail ports, but they efficiently link the vast country’s Han-inhabited areas.

Clear skies along one of Guangzhou’s numerous waterways.

My bed was already made when I boarded in Hangzhou, a bottom bunk in a four berth compartment. The ten hour ride, covering a roughly equivalent distance as New York to Chicago, wasn’t the fastest train available but was quite comfortable. I woke up as we passed the Hong Kong border in Shenzhen, pulling into Guangzhou South Station exactly on time. 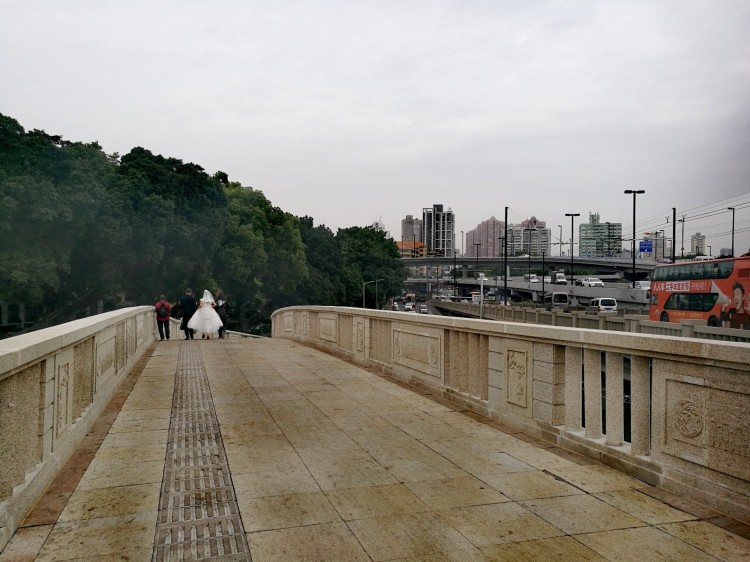 A couple walking across the bridge to Shamian Island to take wedding photos, with the Guangzhou skyline in the background.

Green, leafy Shamian Island was where the Europeans used to live during colonial times. Today it’s home to pleasant walks and the American consulate.

As a city of 12 million, Guangzhou has an efficient metro system with announcements in Mandarin, Cantonese, and English. Cantonese is a dialect separate from Mandarin, but I had no trouble communicating with most people in the latter. Canton comes from the Portuguese transliteration of the Chinese name for Guangdong, a province of 109 million of which Guangzhou is the capital.

I took the metro to the south side of the city, then hopped on the number 30 bus to an old Cantonese imperial garden. This is the bus stop outside the subway station. 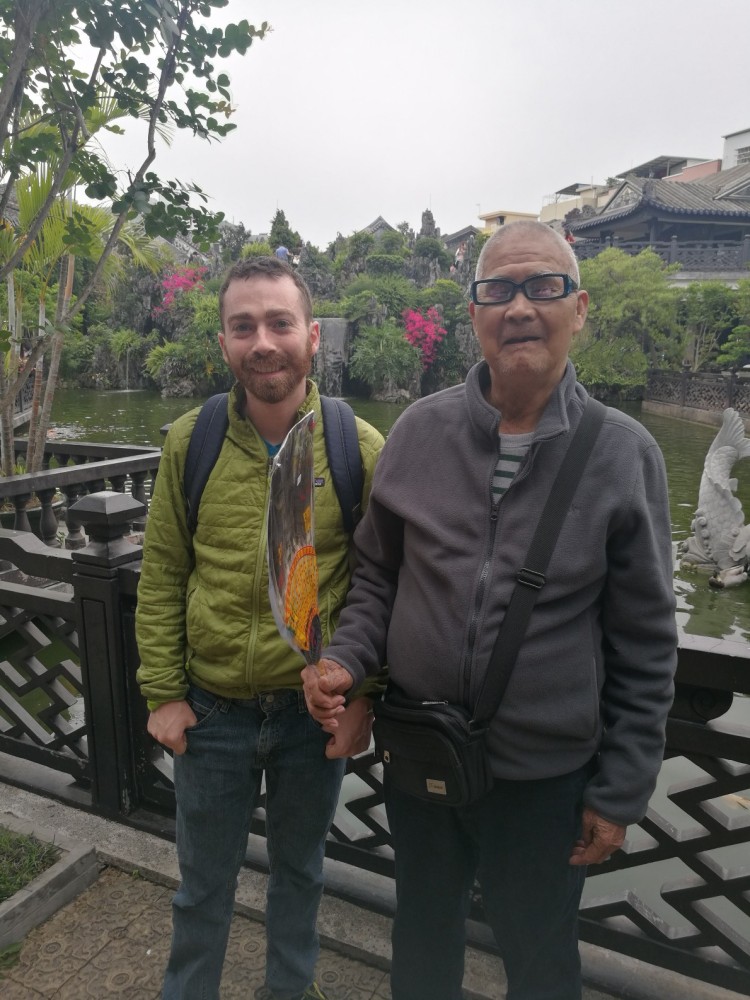 I was the only foreigner at the imperial gardens, which were very pleasant with an extensive bonsai tree collection. Oftentimes Chinese tourists want to take a photo with me, and my requirement is that they send me a copy.

I loaded $20 onto a public transit card, which let me board all trains and buses within the city. Since I can read Chinese and enjoy looking out the window at the city, I usually opt for buses when possible.

Unfortunately, I wasn’t able to try absolutely everything that I wanted to eat in Guangzhou. But I tried a ton of new foods and didn’t get sick once, the latter being a big success in a place like China. 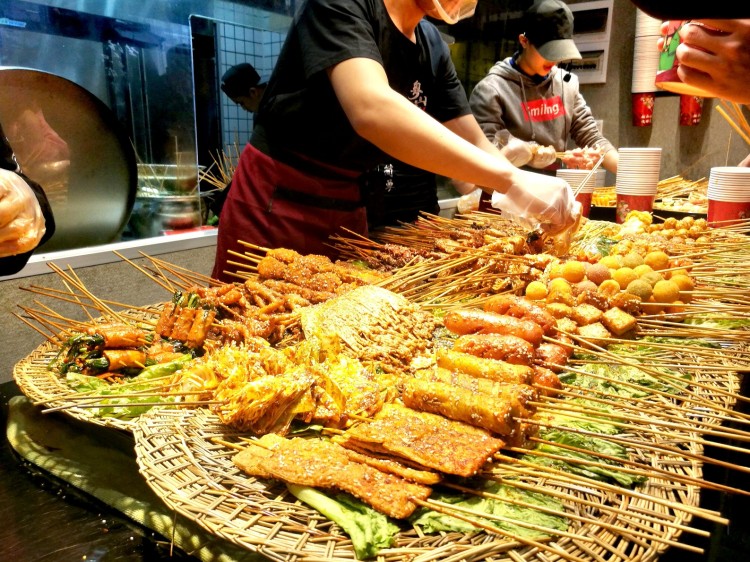 At this stall, which was constantly crowded, you pick out what grilled meats and vegetables you want. They put it in a bucket and cover it in a spicy sauce.

A woman pours rice milk pudding, a popular Cantonese dessert, into a bowl for a customer holding out her white payment slip.

Cantonese desserts and pastry shops are popular across China, but in their hometown of Guangzhou they were truly amazing. 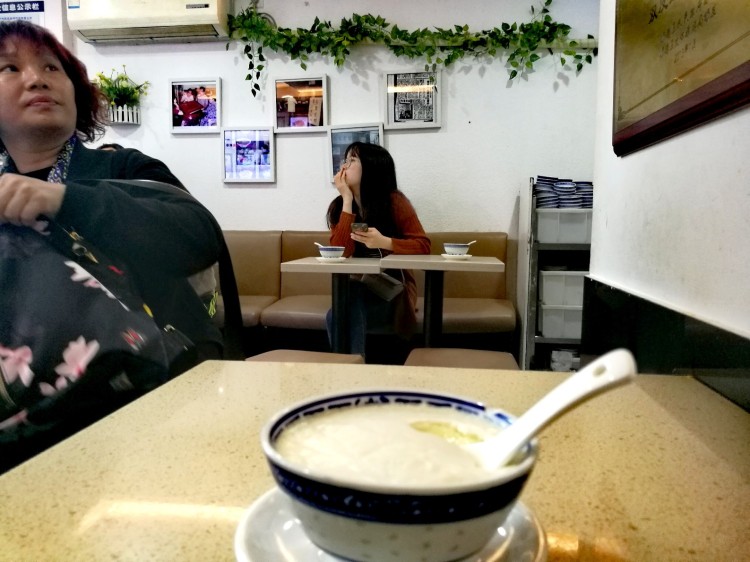 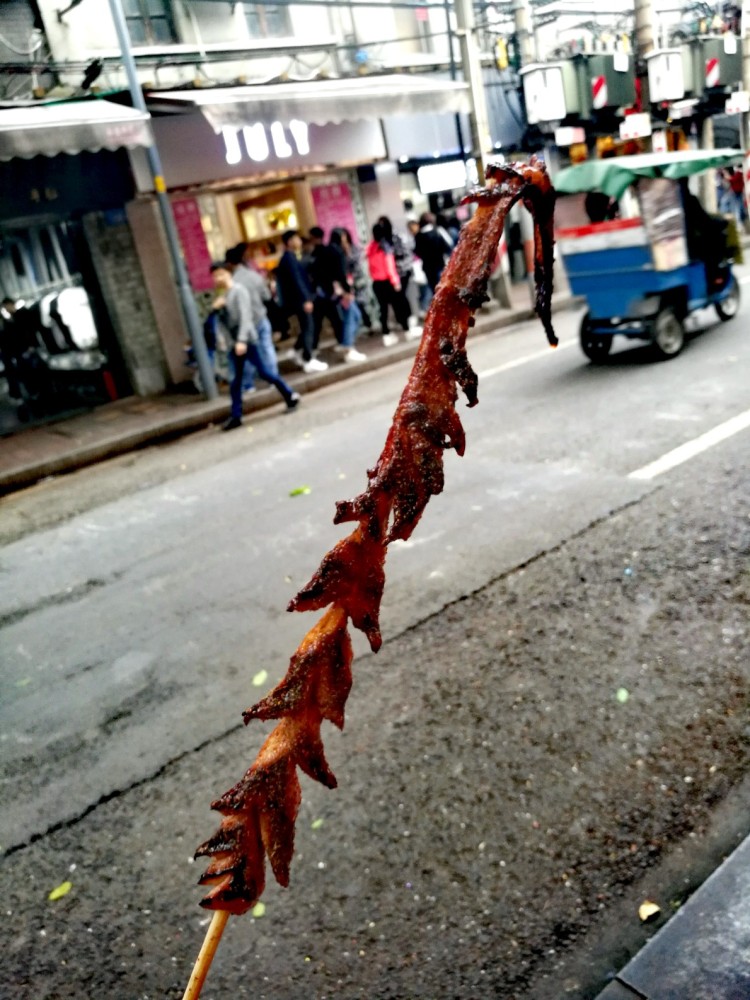 A chunk of grilled squid tentacle.

Inside a Chinese traditional medicine shopping mall. I later saw dried seahorses in a jar.