The police came to the Xi’an hostel looking for someone, but move on when they couldn’t find him. It was a bit strange to see the state police trying to find a presumably foreign national while Taylor Swift blared in the hostel common room, but China is a weird place. They weren’t after me, and that’s all that really matters for these kinds of things. 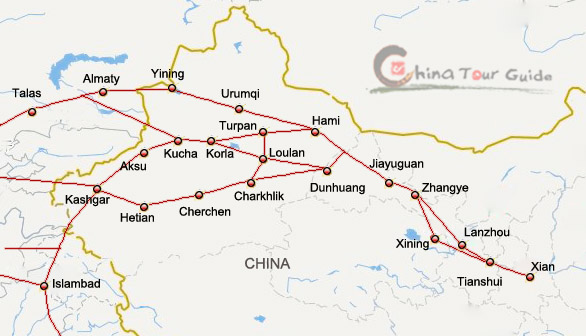 A map of the various Silk Road routes leading from Xi’an west. There wasn’t a single universal path, but rather a variety of different routes meandering towards the Middle East. For various reasons I’ll discuss later, I chose the northernmost route on this map. Image taken from China Tour Guides.

The older Chinese train stations tend to be downtown, like in Europe and America, but high speed rail needs a separate, new set of tracks. Since these specialized tracks were largely built in the last 10 years, bullet train stations around the world tend to be well outside the center of the city. Xi’an North Station is no exception, but because Chinese infrastructure is amazing it’s only a 25 minute subway ride from downtown.

A typical Chinese train ticket. Tickets must be printed at the station, and foreigners have to queue to retrieve tickets. Because I can read and write Chinese, and have a local bank account, I can purchase tickets using Alipay on my phone. I then get a text message containing the number, which I present along with my passport to a clerk who prints my ticket. Station security is usually pretty quick and easy.

My first stop was Lanzhou, capital of Gansu province on the western edge of China proper. Hemmed in by mountains to the north and south, Lanzhou sprawls for miles to the east and west along a river. There’s very little of interest to a traveler, but because it’s the region’s transit capital most Silk Road backpackers stop here to change trains. It’s also a jumping off point to explore a little visited part of Tibet. 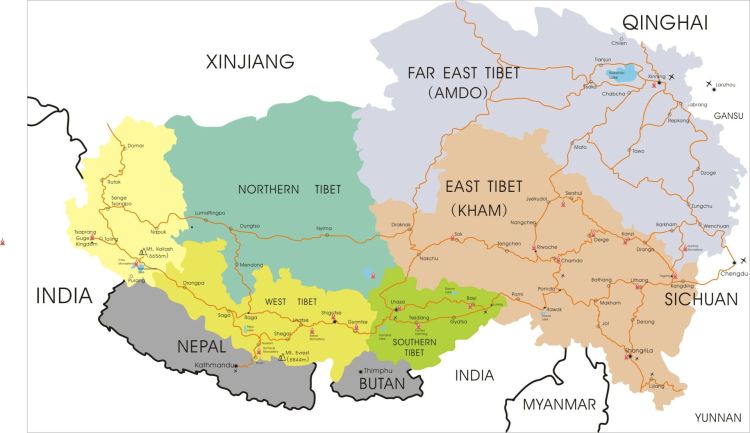 This is a map of Tibet in southwest China and surrounding countries. The cultural boundaries of Tibet are much larger than just the Chinese province of the same name. Xizang is the Mandarin name for the province of Tibet, but translates to West Tibet in English. India, Bhutan, and Nepal also are home to the Tibetan people. 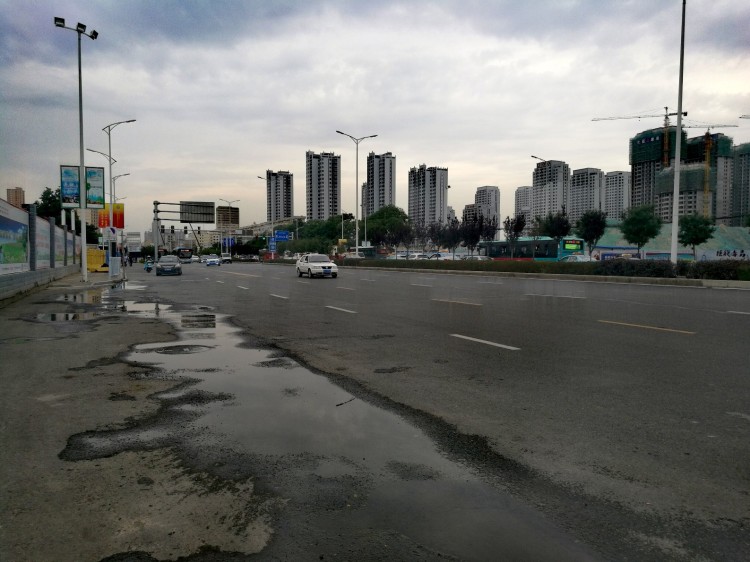 In Lanzhou I ordered a taxi on my phone, and this beautiful plot of land is where he picked me up. He took me to my hotel, and on the drive I couldn’t figure out how the hell he had a perfect five star rating on the Uber-type app considering his terrible driving skills. He wouldn’t let me out of the car until I gave him a five star perfect rating on my phone, so I’m guessing that’s how he’s managed it.

Hotels in China must have a license to host foreigners. These restrictions are especially felt in the west, and Lanzhou has a serious lack of reasonably priced hotels that can accept ghost men like me. This hotel, which I reserved online and was very nice, cost $30 including tax. The walk-in rates posted were almost twice that, but I don’t think anybody ever really pays those. Reserving and paying online gets you the cheapest rates.

From Lanzhou I took a four hour bus to Labrang, a village in the Amdo region of Tibet. Labrang is home to a monastery, which was a cool place to wander around for a day. I stayed in a very nice hostel run by a Dutch woman, and had the entire men’s dorm to myself. This was high season, and shows these places don’t really get that many foreign tourists.

Prayer wheels at the monastery. 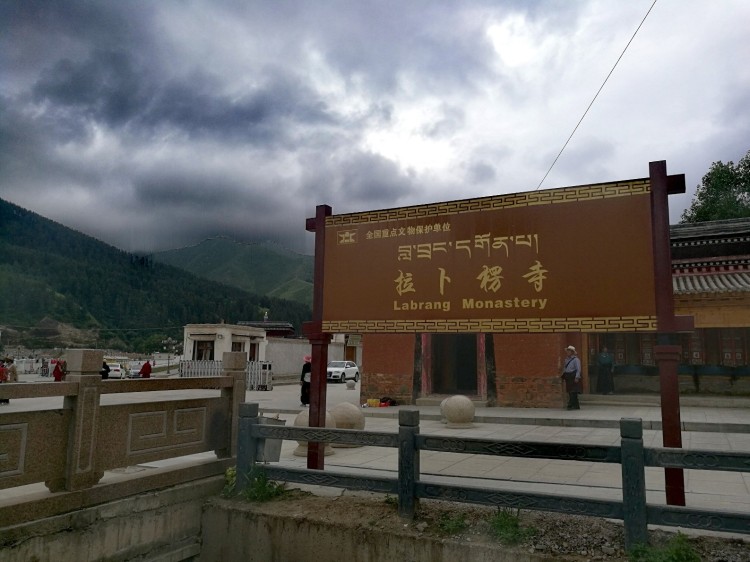 The sign for Labrang Monastery. It rained off and on while I was there.

The monastery was at about 10,000 feet (3000m) elevation, and I definitely felt the abrupt change in altitude when going up the three flights of stairs in my hostel.

The bus ticket from Lanzhou to Labrang, called Xiahe (“Summer River”) in Mandarin. The ticket cost about $11, and the ride was on well paved roads in a decently comfortable bus. We stopped halfway through for a bathroom break. 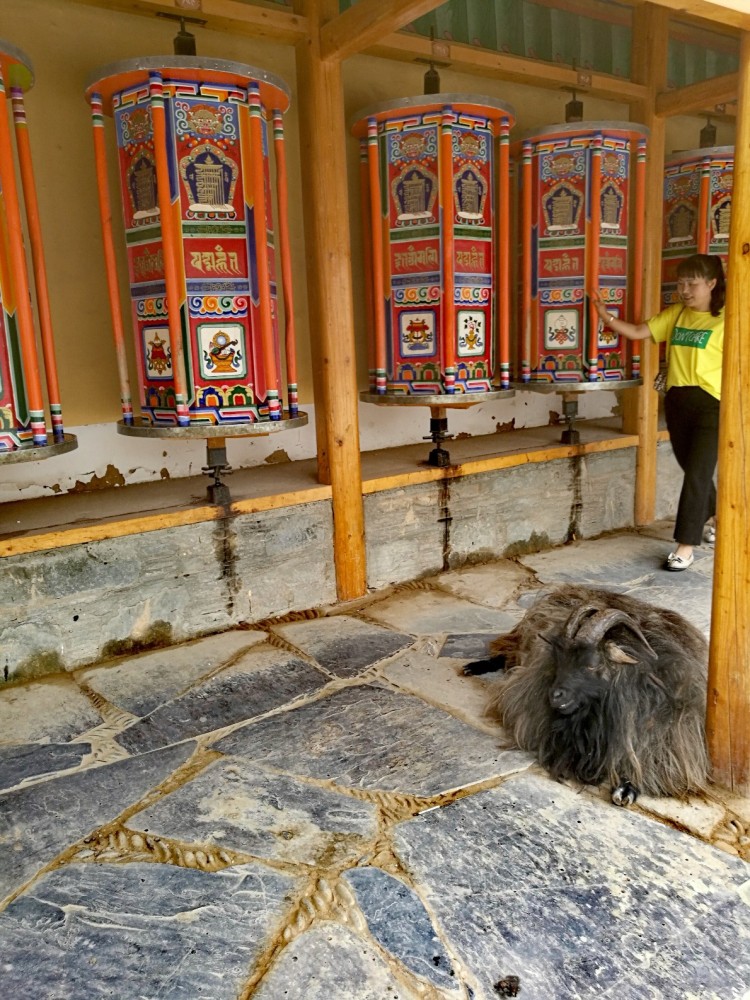 I was told this goat, who lives at the monastery, will charge.

Lanzhou is known across China for its spicy beef noodle soup, pictured above. I love Lanzhou beef noodles, so I had to try it at its source. Well worth the $3 for the meal. Chinese noodle bowls generally come with some bak choy and chunks of meat, and you can add eggs, more veggies, and meats for a few more cents.

After returning to Lanzhou for a night, I caught an afternoon bullet train a few hours to Jiayuguan. Situated at a mountain pass controlling travel between China and Central Asia, the Chinese built the western terminus of the Great Wall here. Nowadays it’s a popular tourist destination for domestic travelers. There’s not much to the actual town of Jiayuguan, but the Great Wall fortress was well worth the visit.

Guarding the entrance to China from Central Asia, people exiled from China in historical periods were thrown out the gates to the west. Very few returned.

Jiayuguan was built where the Tibetan Plateau meets the Gobi Desert. 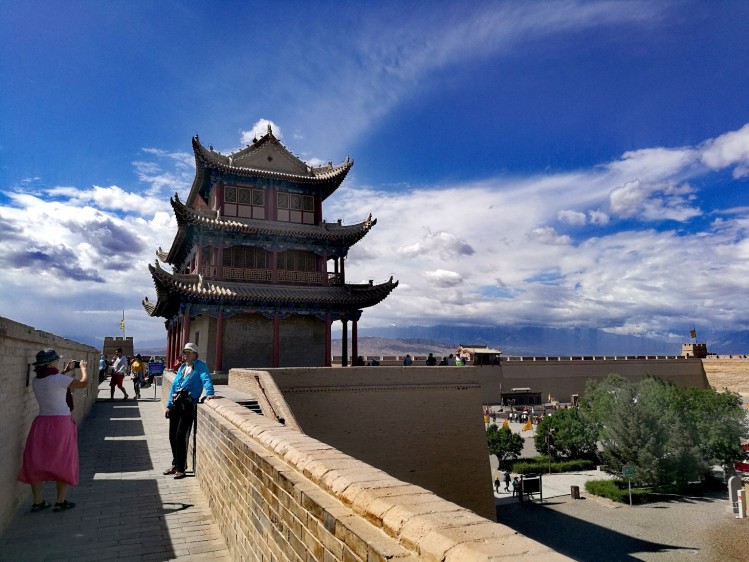 By the end of the Cultural Revolution this, like many of China’s historical relics, was totally destroyed. It was rebuilt in the 80s. 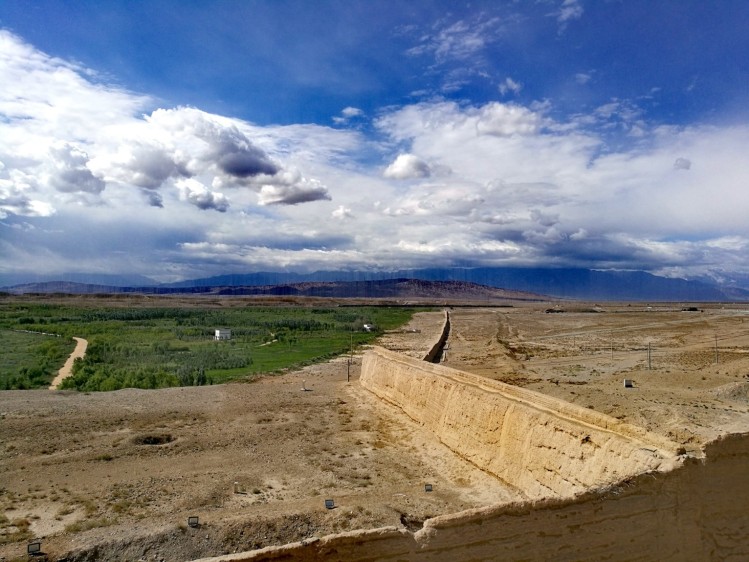 The dirt rampart in the center is the Great Wall, which extends from here all the way to what is today Pyongyang, North Korea. To the left is the oasis which has fed people for thousands of years, and to the right is the inhospitable Gobi Desert and Central Asia.

A map of Gansu province in western China. Dunhuang, my stop after Jiayuguan, was an important oasis town and resupply stop on the Silk Road. Today it’s somewhat obscure, and there’s nothing of significance in the town itself nowadays, but I stopped there for an afternoon.

A high speed rail line connecting Lanzhou to Urumqi in the far northwest Xinjiang province was completed a few years ago, but Dunhuang is on a spur line 180km away from the main artery of the bullet train corridor. Jiayuguan has a daily departure at 7:16am to Dunhuang, with a ticket in regular seating being $8. Also called “hard seat,” this is the lowest cost seat (other than standing) on Chinese slow trains, which go “only” 70mph. The train I took started two days prior in Beijing, and was surprisingly clean, air conditioned, and not bad. I wouldn’t want to do hard seat for much longer than the six hours it takes to get to Dunhuang, but it was fine.

One of the best and worst parts of being on the Chinese slow trains is that you’re traveling with a bunch of locals that are instantly your best friend and want to know everything about your life from birth to the moment of conversation. The scenery was outstanding with the Tibetan plateau to our left and the Gobi Desert to our right, and I spent a few hours chatting with some older Han from Xinjiang and Qinghai provinces. The woman I spent the most time talking with was born and raised in Xinjiang province’s city of Aksu, and had made a vacation with her husband out of going to visit her son in Lanzhou. She had a lot to say about growing up in the far west of China in the 60s.

It was a two hour bus ride from Dunhuang to the closest high speed rail station in Liuyuan, which is the only way to head west. 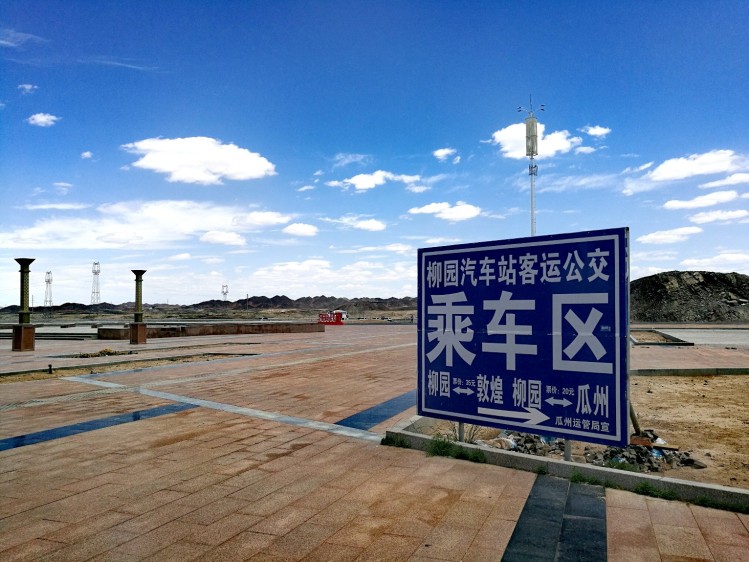 This is the view from the high speed rail station in Liuyuan, in the middle of nowhere in the Gobi Desert. I caught a bullet train from here six hours to Urumqi, capital of Xinjiang province.