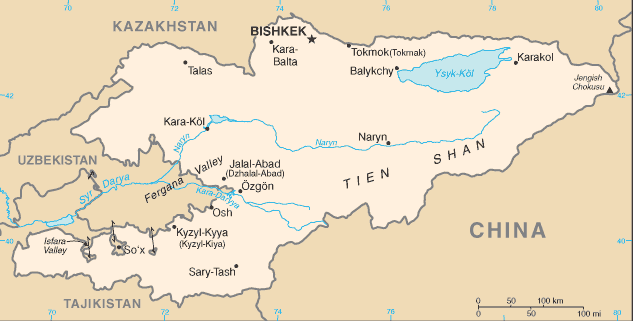 Map of Kyrgyzstan in Central Asia, with the village of Karakol in the northeast of the country to the east of the large alpine Lake Ysyk Kol. Taken from Wikipedia.

Karakol is the trekking capital of Kyrgyzstan, the country which boasts to be the Switzerland of Central Asia (minus the economic and political stability). Marshrutkas, the Russian name for passenger van, leave from the chaotic Bishkek West Bus Station when full for Karakol. Wait times in July seem to be 2 to 20 minutes, and tickets are bought directly from the counter with large letters proclaiming Касси. Ignore the touts out front and follow the crowds of locals into the large, open-air terminal. Tickets should be about $5.50 for the five and a half hour journey, which parallels the mountainous Kazakh border much of the way to Karakol. The babushkas on board seem to have built a heat tolerance in the depths of hell, and will ask you to shut all windows if the temperature dips below 90F/32C. 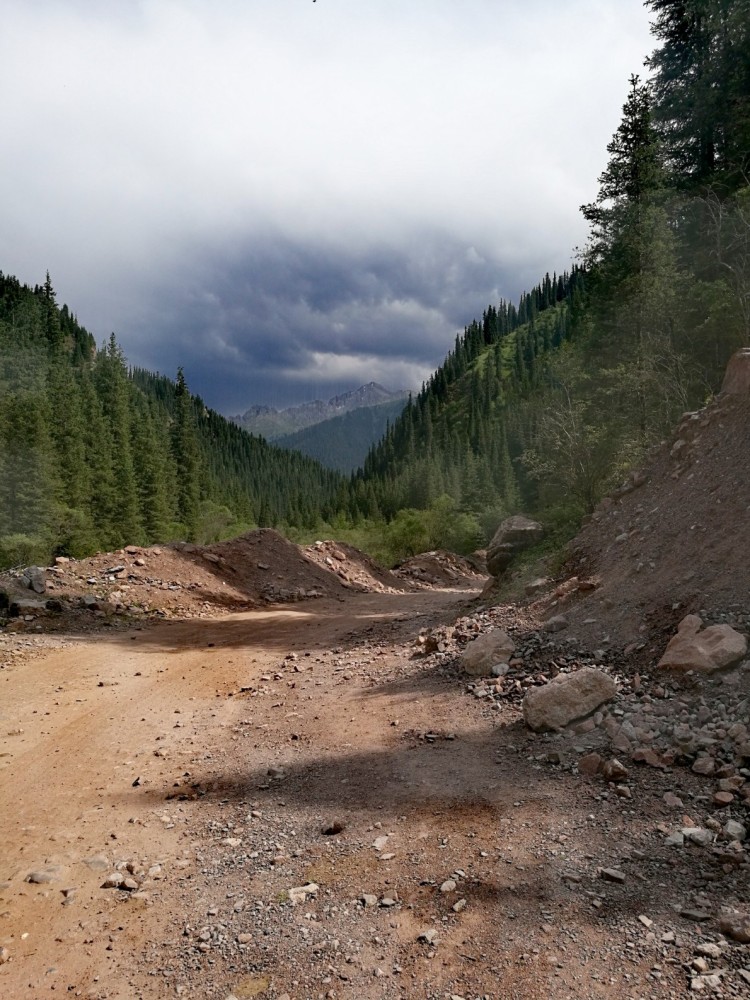 You don’t go to Kyrgyzstan to see the towns. You go to the towns to springboard into the surrounding countryside.

Pretty much all of the backpackers in Karakol stay at Duet Hostel, which is one of the nicest joints I’ve stayed at in the 48 countries I’ve visited. The price is pretty typical for this part of the world at $5 or $6 a night for a bunk in the dorms, and the young Kyrgyz woman with flawless English running everything has plastered trekking maps, detailed step by step instructions on how to get to each trailhead, and contact info for tour organizers all over the walls of the adjacent cafe (which she also runs, and serves great milkshakes, pizzas, sandwiches, and tea).

Taxis from the Karakol bus station to the hostel should cost no more than $1.50, but you’re highly unlikely to get that price. It only costs 15 cents to ride on a marshrutka from the station to within a 5 minute walk of the hostel (which would probably be a 35 minute walk with no vehicle). Just tell the driver a-stan-ah-VEE-tyeh, which I think means stop in Russian, when you want to get off.

Duet Hostel in Karakol, photo taken directly from their website.

One of the more popular hikes in the region is Kyzyl Suu to Jeti Oguz. By Kyrgyz standards of popularity this means that over the course of 72 hours I saw two other groups of hikers on trail, both within a few hours of each other. I hiked the route in reverse, but I’d recommend doing the standard Kyzyl Suu to Jeti Oguz direction because it’s way easier and less steep of an ascent. 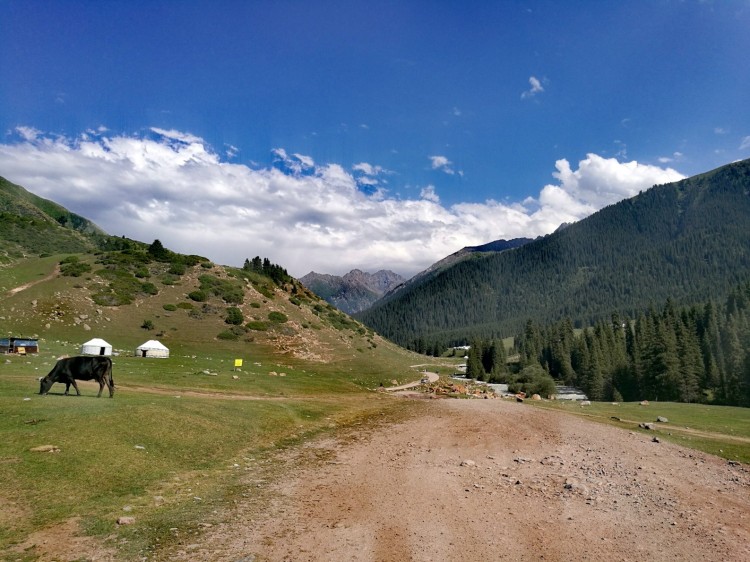 You can hitch a ride pretty easily from the road through the Jeti Oguz gorge, which pretty much everyone does to skip about 20km, but I found it to be a pleasant walk along rivers and Kyrgyz summer yurt camps.

Marshrutkas leave about every hour starting at 10am from the Karakol bazaar. You’ll know you’re in the right place when taxi drivers start telling you the bus service has been discontinued and you can only go by taxi. Duet Hostel has little pieces of paper with maps and detailed walking instructions that will take you to the exact spot to pick up transport to Jeti Oguz, which is about a 20 minute drive and should cost around 40 cents. 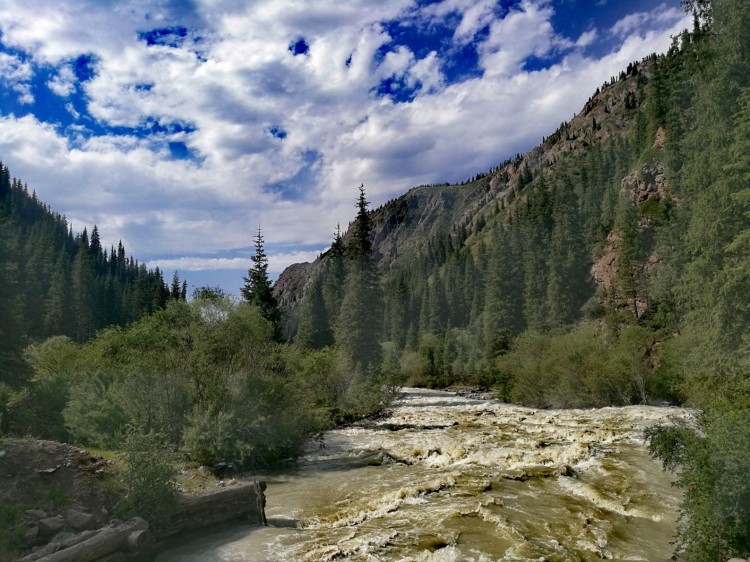 The river crossings are all done by bridge, which don’t look stable but seemed fine. I took this photo while standing on one of those bridges. 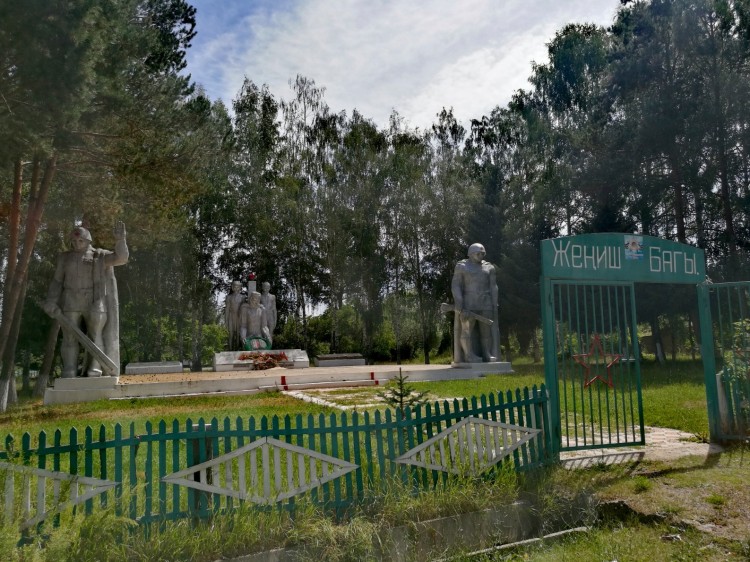 I saw this while walking from the tiny village of Jeti Oguz along the only dirt road heading towards the mountains. 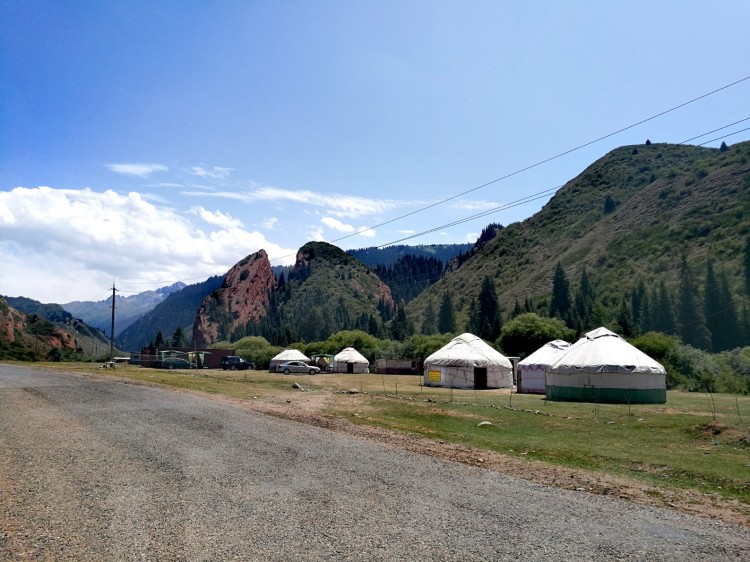 A bit different from the road walks on the Continental Divide Trail. But the scenery was actually pretty similar.

I was a bit surprised how much of the hike was along a road, which has a decent amount of traffic coming out of Jeti Oguz for the first 15km. Multiple cars stopped to offer a ride, but I was enjoying myself and just walked. There’s one touristy spot where the gravel road ends and a rough dirt road begins, and this is where you’ll stop seeing people. At 6:30pm I’d already covered 22km since noon, and with a storm coming I set up my tent by the river the road parallels. You could set up your tent next to a yurt camp for about $1.50, just ask the owners permission, and a hot dinner would probably be inexpensive. I never took advantage of that option so I can’t comment on it. The locals don’t seem to care if you camp in the forest and clean up after yourself. 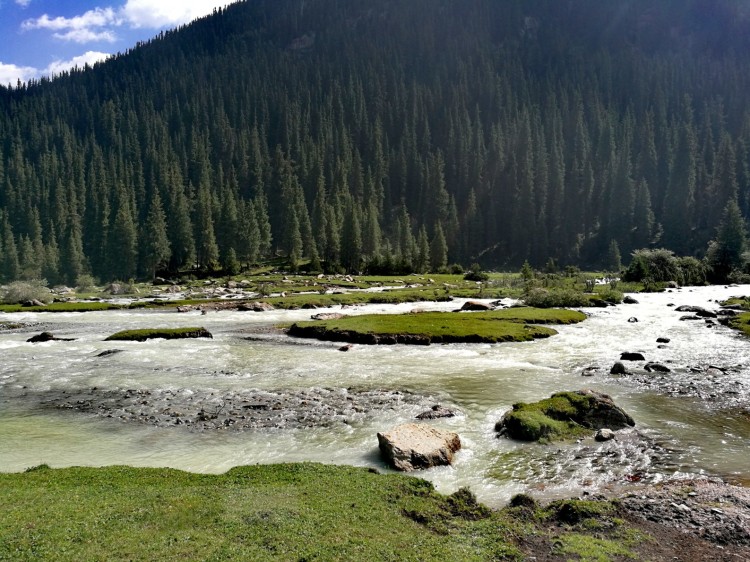 Because it’s so full of sediment and murky, the river looks way deeper and more treacherous than it actually is (in person it looked way worse than in the photo). You can pay a local man with a horse $1.50 to cross on horseback, which honestly is probably the way to do it. Stream crossings are the most dangerous part of all my hikes (not bears or murderers in the woods!). 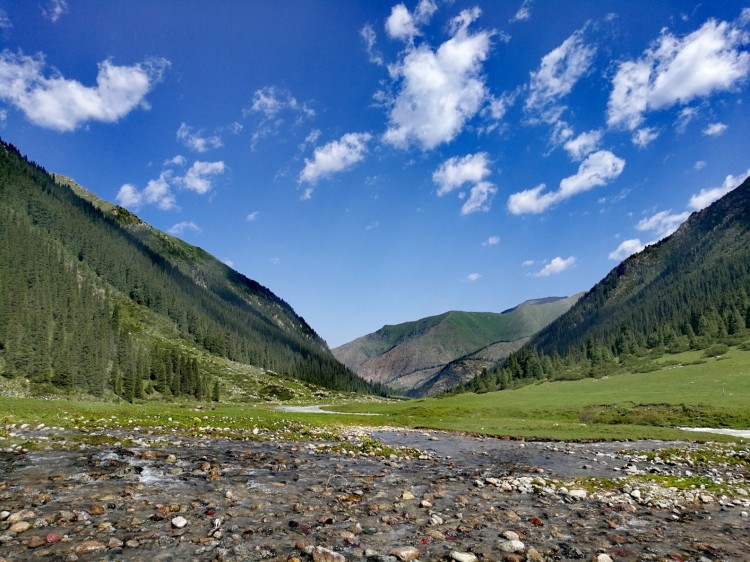 Navigation is pretty easy when you just have to follow a river upstream. 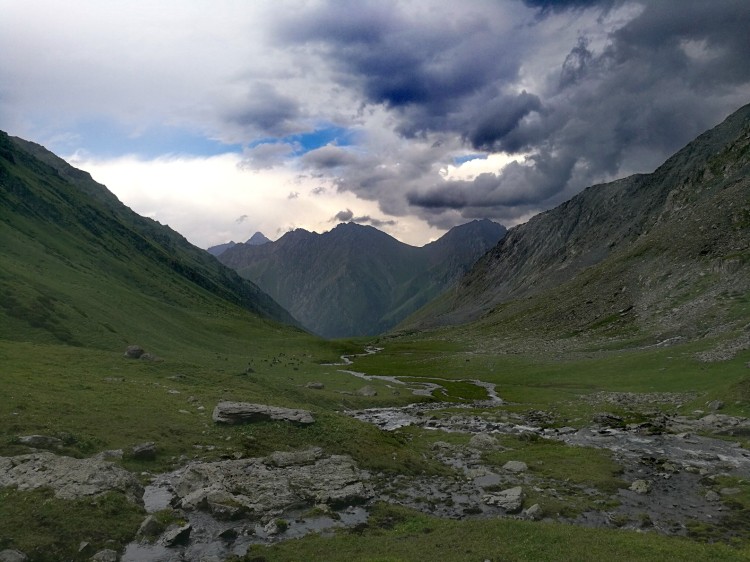 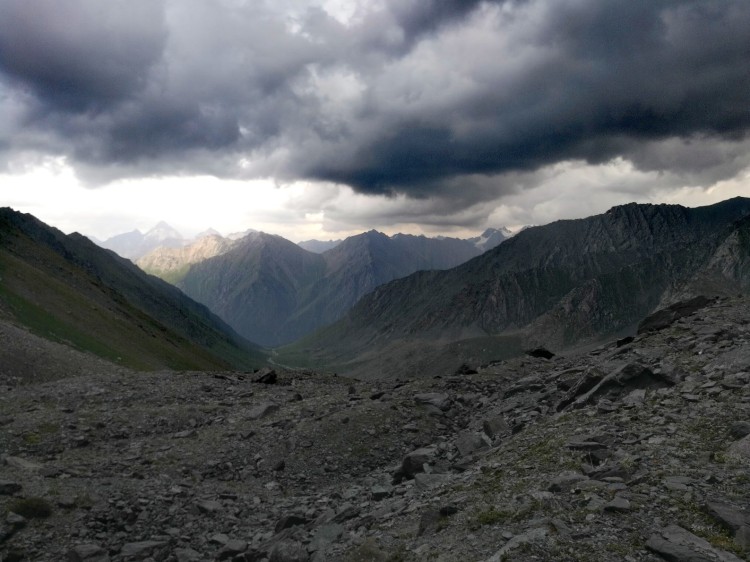 The river I followed got smaller and smaller as I reached its source. 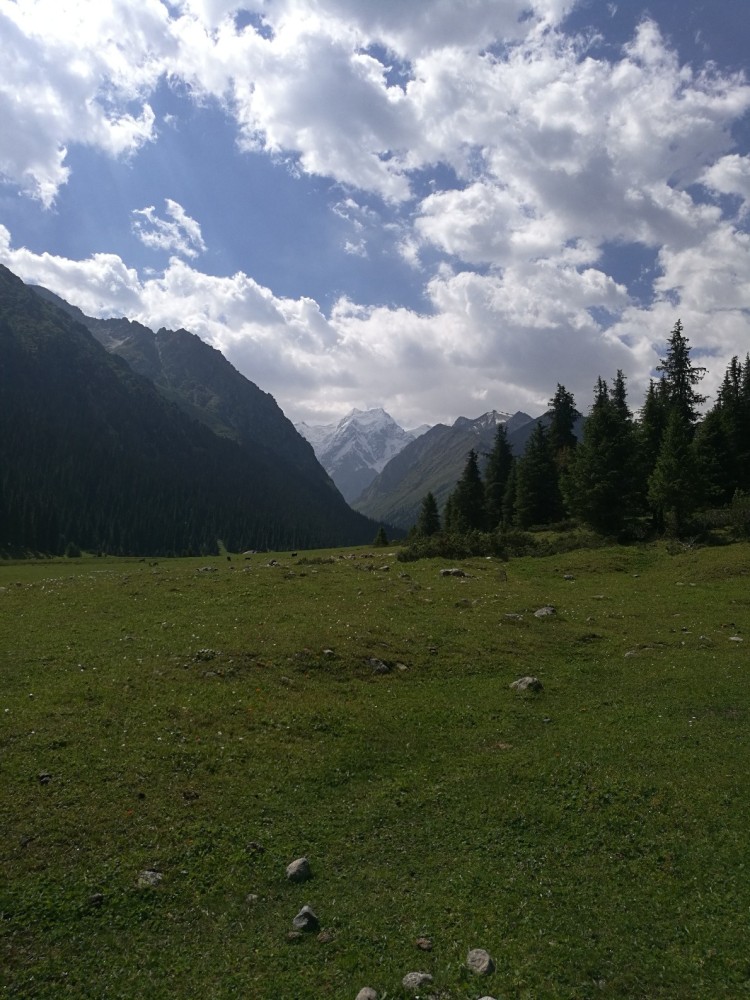 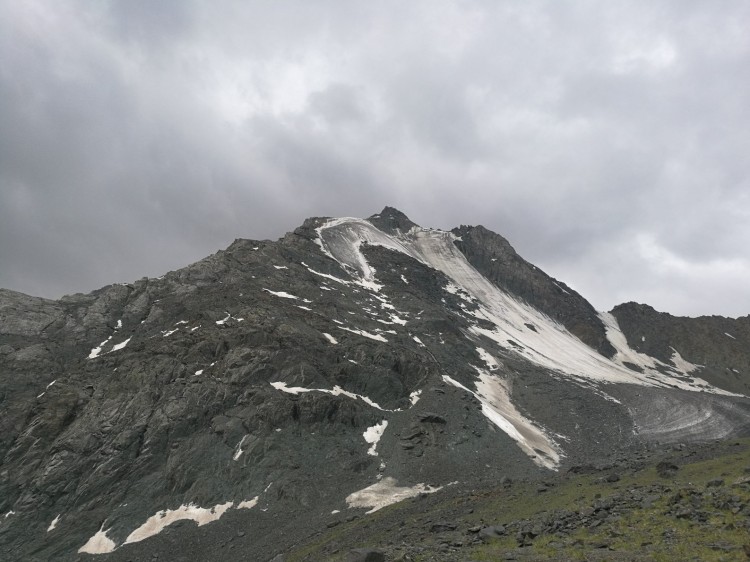 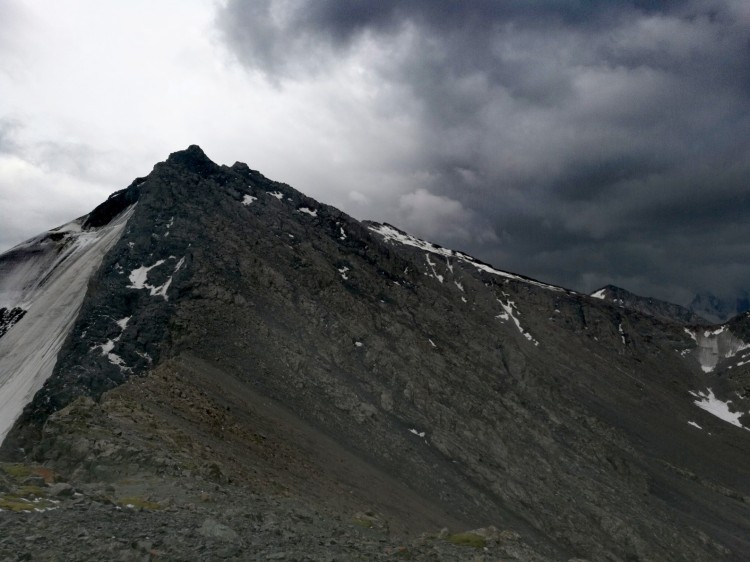 I was below the only pass of the trip when it started hailing. I set up my tent and waited it out. Within 45 minutes, the intense storm had vanished and been replaced by clear, sunny skies. So I packed everything back up and booked it to the top. After ascending a couple thousand meters since the morning, and going at a very steep incline, I wasn’t walking very quickly. 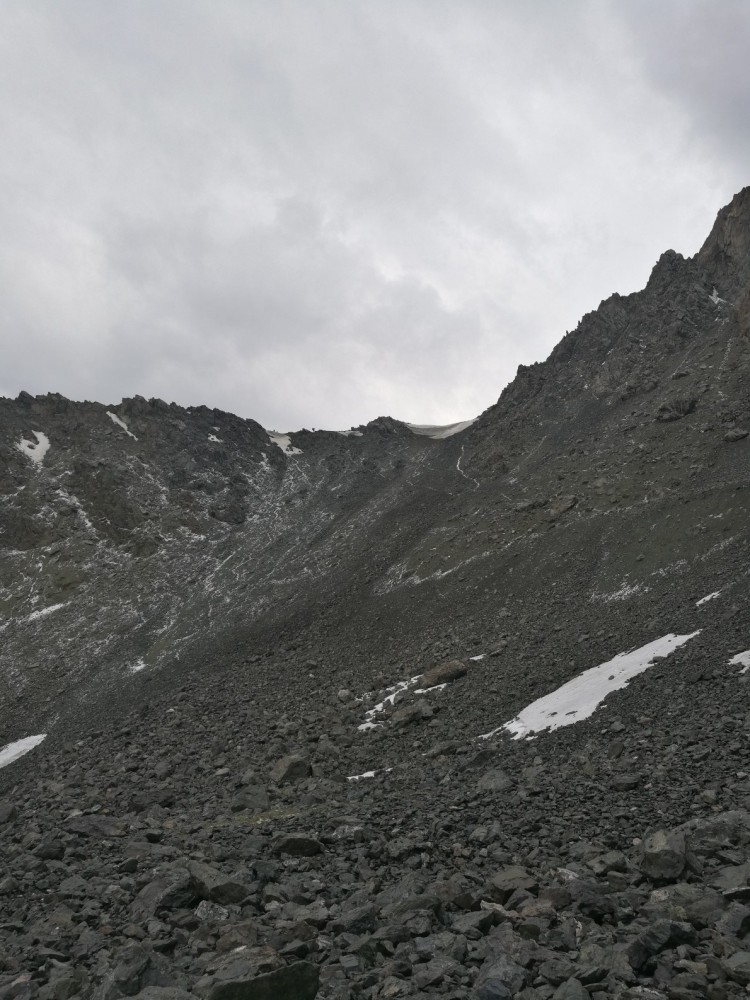 The pass is up there somewhere. It was a tough scramble, and there were parts that were very unstable. Cairns marked the best route, which wasn’t obvious looking at it from a distance. There were multiple parts where I just didn’t look down. At 6pm a group of Germans with insanely huge packs told me there was no way I’d get over the pass and be able to camp by nightfall. Within an hour, 7pm, I was in my tent. It gets dark around 9pm in late July. 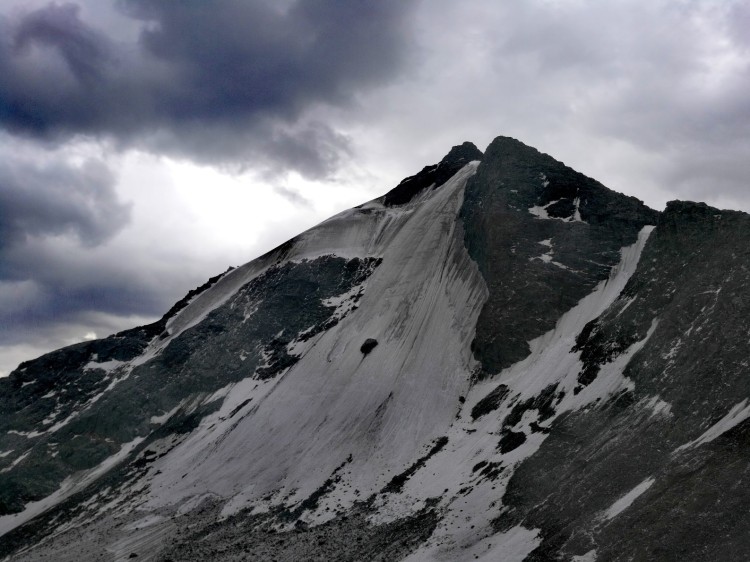 The pass, Archa Tor, was beautiful. But the weather had soured by the time I literally hauled myself up a snow bank and onto the pass, so I took some photos and then hurried down. 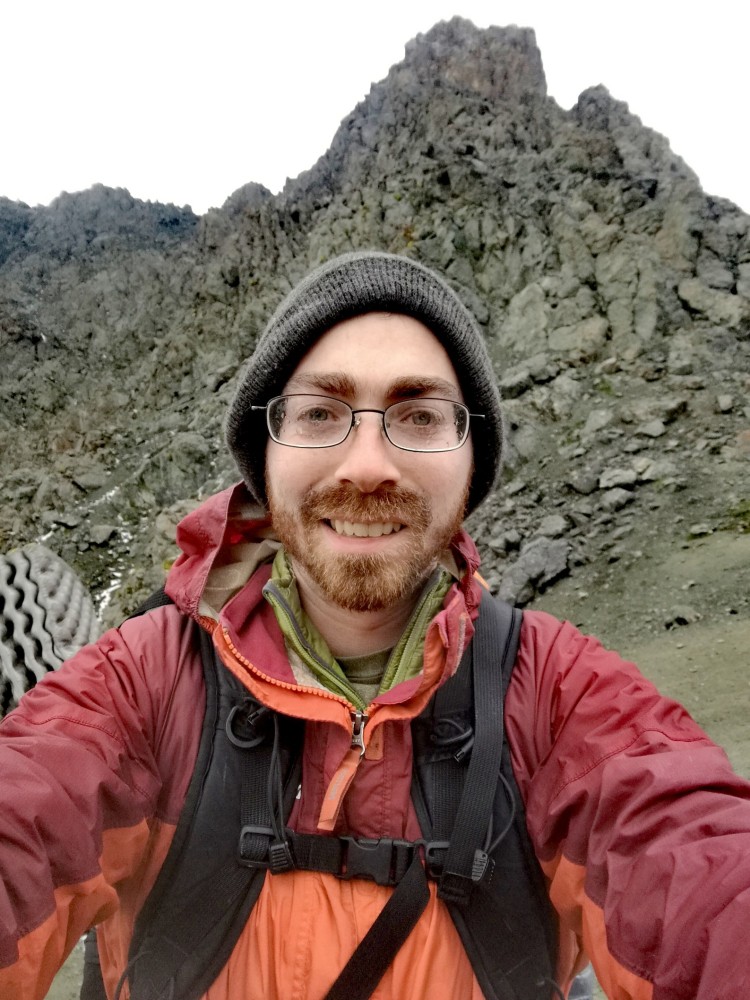 Proof that I made it to the top!

I set up my tent in a clearing about 300m below the pass, down another steep scramble. The hail started again, not as intense as before, shortly after I climbed inside my sleeping bag. My socks were soaked, and my sleeping bag had gotten a bit wet during the previous hailstorm. Since it’s a down sleeping bag and has gotten over 300 nights of use, the warmth and loft aren’t what they used to be. It was a bitterly cold night because of that, and it didn’t help that at 9pm a herd of cows graced me with their presence. I seriously don’t have any clue why cows would decide to chill out at night at 3600m on a mountain, but they shit and pissed wonderful smells all around my tent. They also tripped over the guylines supporting my tent all night, and one managed to get inside my food bag to eat my chocolate bar. I got around 1.5 to 2 hours of sleep that night and developed a cold, which was not ideal. 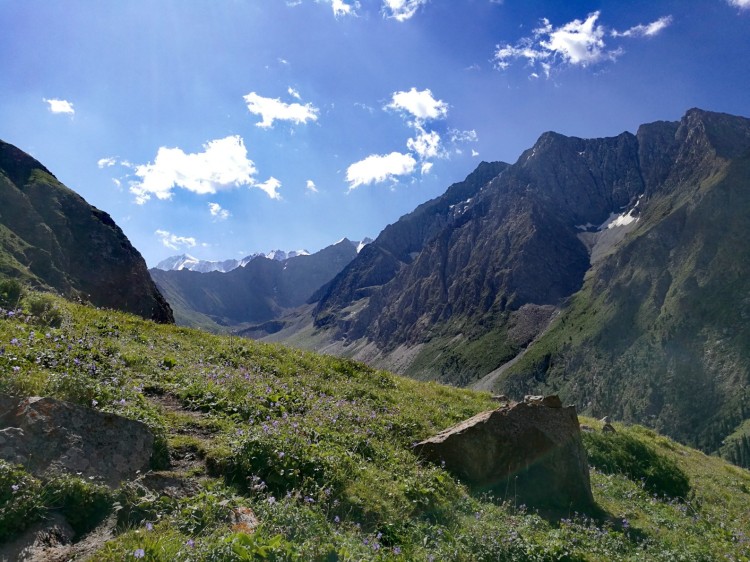 The next morning was gorgeous, with clear skies and awesome vistas. 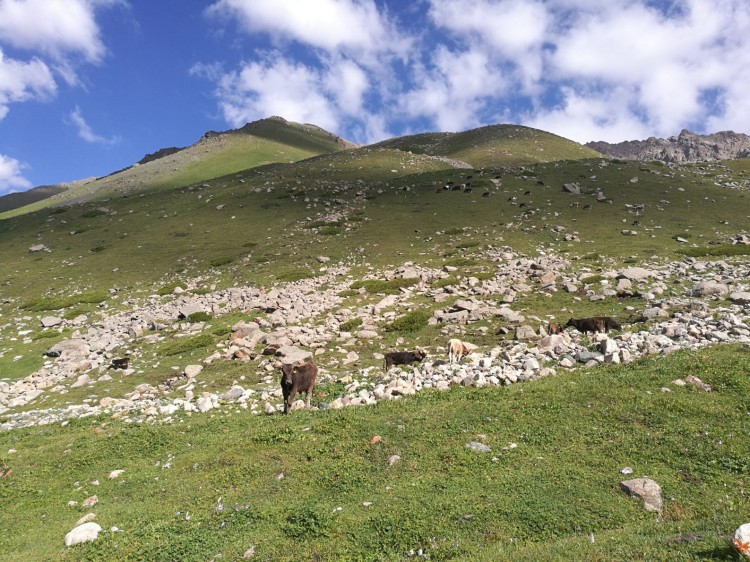 Damn cows everywhere on the mountain.

A cow path tracing its way around the mountain. I wonder if they ever fall off the edge. Sometimes I hoped so. 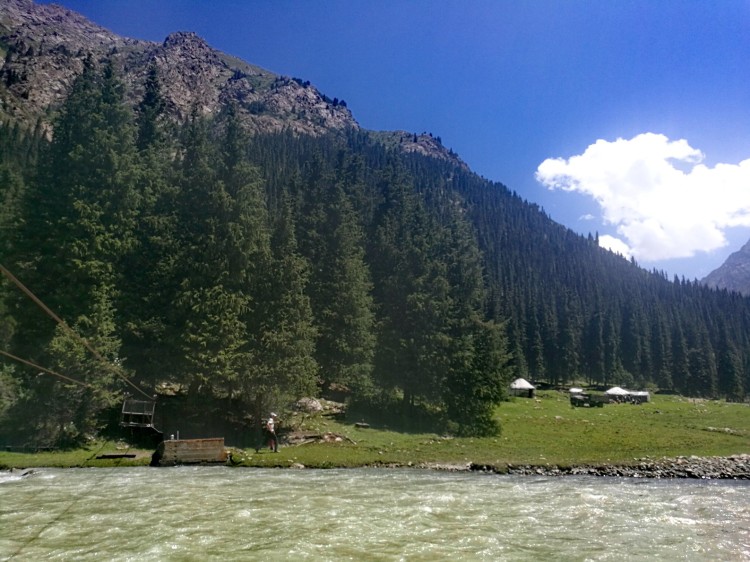 At one point you cross the river for the final time on a cart with pulleys operated by two young Kyrgyz boys who charge a whopping $1.50 per trip.

I ended up road walking from the end of the trail to Kyzyl Suu, camping behind some bushes by the road along the way. I wasn’t feeling very well by that point, having caught a cold from lack of sleep and the wet, sub-freezing temps the night before, and passed out for 8 hours straight in my tent. It was glorious, and the next morning I had a 2.5 hour walk to the highway.

I’m sure there’s a marshrutka or something from Kyzyl Suu back to Karakol, but I was able to hitch a ride within seconds once I reached the highway. The local driver asked for $1.50 to take me on the 35 minute ride, and picked up some others along the way. Hitchhiking is common and safe here.

I was back at Duet Hostel by 10am, and spent the rest of the day chatting with other foreigners, eating, and drinking iced tea.