Some of the most obnoxious people I’ve ever met love Southeast Asia, and this has always put me off from the region. The lowest dregs of hippie trash society seem to congregate on the beaches of southern Thailand in a hazy mix of illegal substances, to which local authorities turn a blind eye in the hopes of maintaining the flow of hard currency. “I spent six months in Phuket and found myself,” a white dude with dreadlocks once told me. “You just wouldn’t understand.”

But I have a job and a stable source of income, which sets me out from the vast majority of hippie trash finding themselves in the Eat, Pray, Love style, and I’ve heard so many wonderful reports from friends about Vietnam. So I gave it a try, and had a great time! My entire trip including food, accommodation, flights, evisa, and transportation cost less than $700, and here’s how I did it: 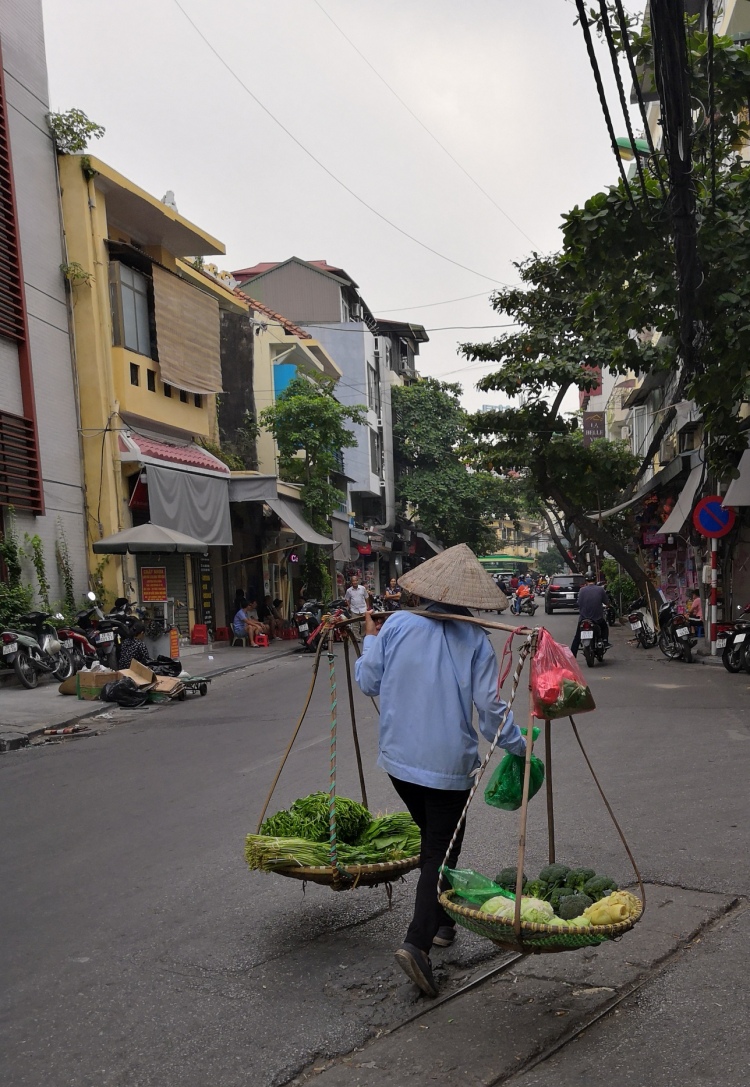 The 70th anniversary of Chairman Mao’s founding of the People’s Republic of China was celebrated with massive military parades in Beijing and seven days of paid holiday. As a measure of China’s immense scale, one out of every 15 people on the planet decided to travel during this time. Travel in China is a nightmare during this time, so back in May I bought round trip tickets on China Eastern Air from Shanghai to Hanoi for about $400.

Vietnamese egg coffee! It looked crazy but was actually delicious. Because dairy products were in short supply after the 1975 American embargo, whisked egg yolk started to be used in the cafes of Hanoi to sweeten the incredibly strong Vietnamese coffee.

Hanging out on a tiny balcony in tiny chairs in a back alley Hanoi coffee shop. The cafe scene in in the capital is phenomenal. Coffees run from 75 cents to $1.75 per cup, and there are countless options where locals go to chat or hang out with a book. Although there may not always be an English menu, there was usually at least one younger barista who spoke some English and was able to help me. Not that there were many options. Usually you just got an espresso with condensed milk, which was delicious (and packed with 180mg of caffeine in a tiny cup!). Overall, getting by with English in northern Vietnam was very easy.

I booked a loft on Airbnb in a nice district of central Hanoi for $20 a night including all fees. The owner was an incredibly helpful woman who spoke excellent English and gave me heaps of recommendations on where to try various local dishes in the old town. She also arranged for a driver to stand at arrivals with my name on a sign and drive me to the apartment, all for about $15.

I spent two full days wandering around Hanoi, which I think was a good amount of time. A meal like this with a beer would run about $2 at a street stall. The workers at the stalls spoke some English, and I’d usually just point to whatever looked good that another patron was eating because I can’t read Vietnamese menus.

The winding streets of Hanoi’s old town are filled with pho shops and cafes where you can sit, order an iced coffee with condensed milk, and watch the ceaseless traffic. I worried about Hanoi coming across as too touristy, and that I’d feel like I was in some Asian Gatlinburg (before it caught on fire). Although there were a lot of foreigners traveling Vietnam, I never really felt like I was in a tourist trap. Maybe that’s because I was going in with low expectations, or because everything was so damn cheap and high quality that I didn’t ever get the feeling I was being excessively ripped off. Vietnam is just pleasant and easy. 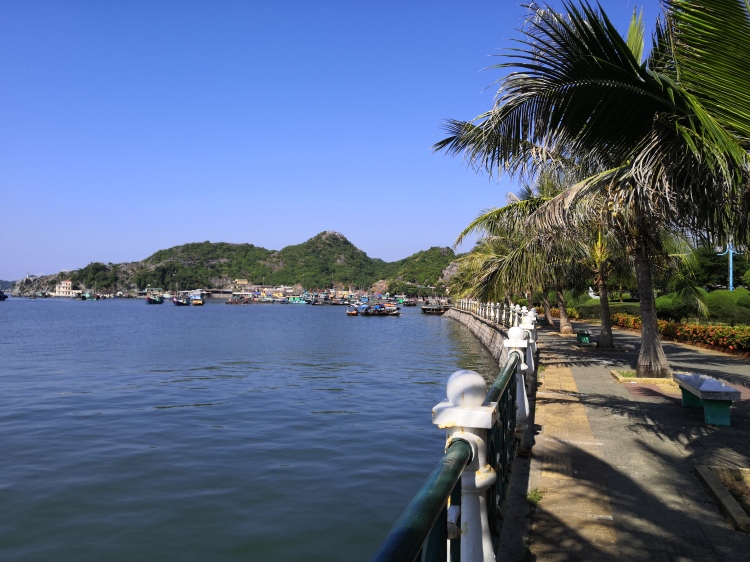 Walking along the sea on Cat Ba Island. I used Cat Ba Express to book a bus to the sea, connecting to a 5 minute boat ride to the island, and finally a 40 minute bus to Cat Ba Town. Cat Ba is the largest island in an archipelago, just south of the major tourist attraction of Ha Long Bay. The most common way to visit picturesque Ha Long Bay is to take a 2.5 hour bus from Hanoi to the sea, cruise the islands for a few hours, then take another 2.5 hour bus back to Hanoi. A quieter option recommended to me, which I did, was to spend some nights on Cat Ba Island and arrange an all day boat tour to see more.

Cruising along the islands of Lan Ha Bay. I booked an eight hour kayaking and boat trip for $23, and there were seven other people on board. I was hesitant to do a cruise, but it was a lot of fun!

Lan Ha Bay is populated by chunks of rock sticking out of the sea.

Some floating homes and fish farms we passed by and stopped at.

When I arrived at Cat Ba Town, I quickly found that the hotel I’d booked was closed. I found a different place with good reviews on booking.com, went there, and asked the owner if I could get the last minute reservation price. He said yes, as long as I paid in cash. My two bed, air conditioned room with hot water cost $8.65 a night.

Looking across the water. 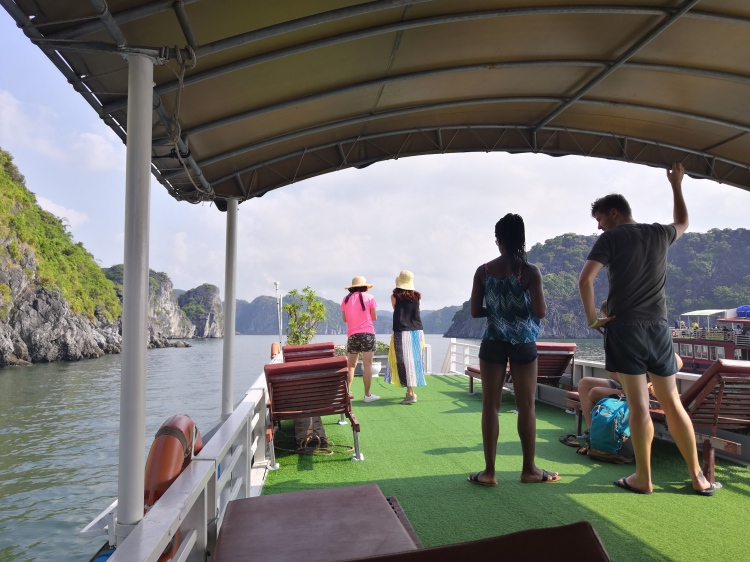 It was cloudy in the morning, but by the afternoon it had cleared up and we had great views across the bay. 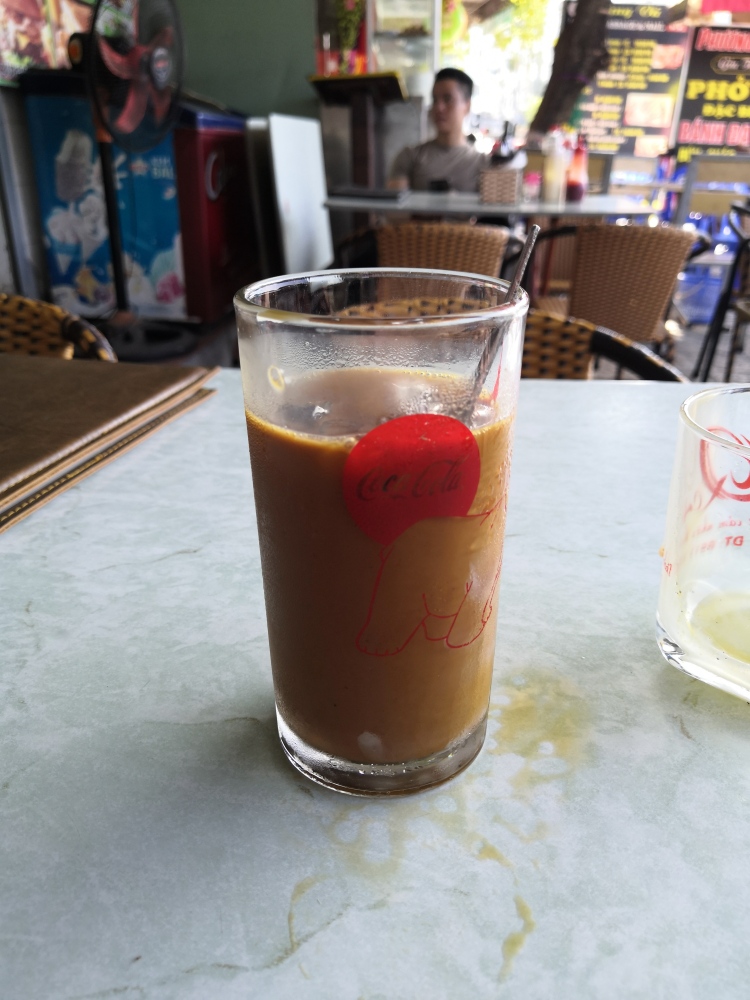 Iced coffee with condensed milk from a street side cafe in Cat Ba Town. It was shoulder season on the island, but pretty much all the restaurants were open. And the food was pretty good! Even at the places that were frequented mainly by tourists, meals were still only about $3 or so. 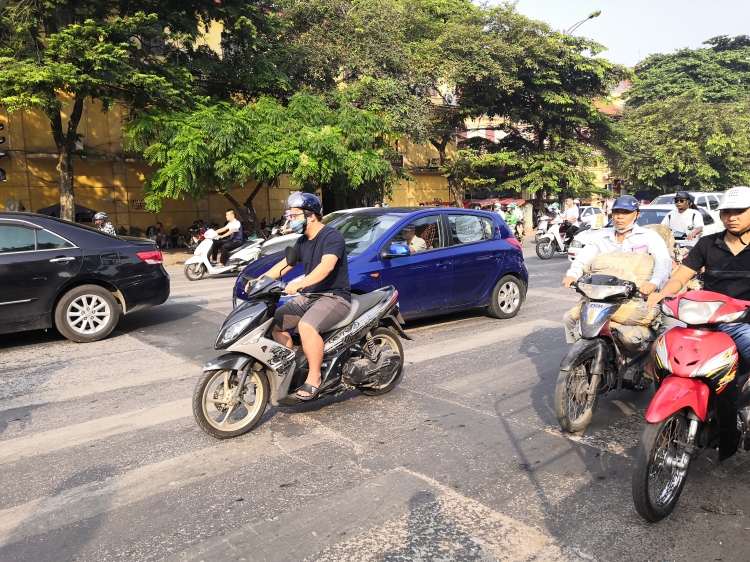 Crossing the street could be difficult in Hanoi, but I just linked up with elderly locals who had no fear.

Taxis around Hanoi generally averaged about $1 for a 12 minute ride. I used a ride hailing app called Grab which is popular across SE Asia and basically the same as Uber.

My evisa cost $26. After uploading my info plus a photo, two days later I downloaded from the government website a PDF of my visa. I printed that out, showed it to officials upon arrival at the Hanoi airport, and the whole immigration process including waiting in line took about four minutes.

Overall, I really enjoyed Vietnam and would love to go back. Even as a non-beach person who abhors the party circuit of Southeast Asia, I had a blast.

One thought on “Hanoi and Cat Ba”